a buñuel musical
by Douglas Messerli

I should imagine that most film-goers, even rather sophisticated viewers who may love the films of Luis Buñuel, could not imagine that his first long-feature film was a musical of sorts, and, moreover, a story centered on two somewhat shady cowboy figures who attempt to shake-up the Mexican oil business. As critics have long noted, Gran Casino was a film the great director took on primarily for money not for its story or narrative possibilities. Indeed, at moments it appears like a Hollywood B movie using the US stereotypes of Mexicans.
Two friends, Gerardo (Jorge Negrete) and Demetrio (Julio Villarreal), are locked up in a small-town Mexican jail for, evidently, unruly behavior—apparently, they have been involved in a bar fight—and, since they cannot get out of jail until the warden returns from business elsewhere, they break out of their cell, with Gerardo singing while strumming his guitar to hide the noise as Demetrio saws through the prison bars. The other prisoners sing along as if it were some Mariachi number. 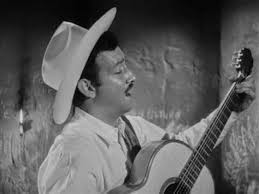 The handsome singing cowboy and his willy partner soon find themselves at the door of a small oil field operated by José Enrique (Francisco Jambrina), a former Argentinian who cannot find workers since the local oil barons have threatened them if they dare attempt employment with his company. José refuses to sell out to the bully barons but is quickly going broke. The loquacious Gerardo convinces the entrepreneur to hire them, and the two quickly go about finding local workers, allowing José’s oil field to return to full operation.
When José seeks to celebrate his new-found luck with his new foremen at the local casino, however, he meets up with an attractive casino worker and is drawn upstairs into her room, soon after disappearing, never to be found again. It is at this very moment when Buñuel’s grade B film turns into a much more interesting work, as Gerardo, sitting at the bar observes the entire encounter by staring into a silver container, which contorts and dissolves what he is seeing, thus suggesting that the truth in this seemingly straight-forward story, is not only distorted, but can never be truly known.
The film gets even better with the arrival of José’s sister, Mercedes (Libertad Lamarque), who, when told of the disappearance of her brother determines to use her own singing talents to join the staff of the Casino in an attempt to uncover the mystery of her José’s absence. 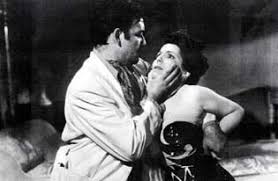 In real life Lamarque had long been an Argentine film star, who in her best works brought her tango-inspired singing with her beauty and acting abilities together, wowing her audiences. She also attracted the attention of then Colonel Juan Perón, who had been dating Eva Duarte. The two publicly dueled over the fast-rising officer, at one point Lamarque slapping Duarte’s face when she dared sit upon her movie-shooting chair. Of course, we all know who won this battle of love for Perón, and when Duarte and Peron married, Lamarque’s films were banned in Argentina, the actress forced to flee to Mexico. 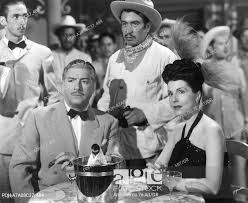 The stylish singer, it is apparent in this film, was a provocative performer, and soon catches the eye the good-hearted cowboy. Although she at first suspects him and Demetrio, who now run her brother’s business, as being guilty in his death, she also falls in love with him. And some of the best moments of Buñuel’s work are the musical interludes with the two almost ridiculously lusting over the very performances of one another.
Together they uncover the identity of Mercedes’ brother’s true murderer, the local representative of Big Oil, Don Fabio. But by that time the director has seemingly lost interest in this film, the conclusion being of far less interest to him (and us) than the kind of mad passion whipped up between the different singers. The oil between them is clearly of another kind than that which comes out of the soil.
No matter; Gran Casino is still grand fun, the film looking at moments like a southwestern version of Josef van Sternberg’s Dietrich-starring Morocco. If this is not first-rate Buñuel, it’s still something worthy of being watched.

Posted by greenintegerblog at 8:44 AM