lies and confessions
by Douglas Messerli

Of the three films in Marcel Pagnol’s Marseille works, my favorite is the last, César, not only because it resolves so many of the thorny issues of the first two, but because of its several philosophical debates about religion and science, science and popular opinion, community and the individual, and, most importantly, truth and lies. Written directly for the screen, and directed by Pagnol himself, the author deftly brings these dialogues up, gathering them into a truly forgiving way that represents both the intelligence and ignorance of his insular Marseille-harbor community. 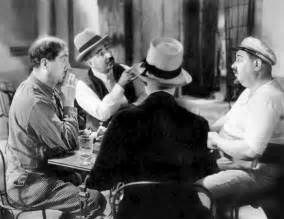 All of the figures from the first two films appear, but this time they are 20 years older, and the gentle Panisse, whom we have grown to like and become even fonder of in this work, is dying. His friend César, a bit dirtier and clearly not so far from death himself, is seen hurrying off to the local church to summon the priest to Panisse’s side. Despite his own lack of church-going, César, like almost all the others around him, still adheres to Catholicism, and he wants the priest, Elzear Bonnegrâce (Thommeray) to hear his friend’s last confession—but only if Elzear makes two minor sins of omission, he is told he must not wear his formal church attire and he must leave his adenoidal missionary boy in the kitchen. It’s all to appear like an “accidental” visit; after all, there is nothing worse for a dying man than the realization that he is actually dying, a serious issue upon which the doctor ((Edouard Delmont) later lectures the religious figure, having recently seen two of patients die suddenly after the priest has visited them.
Yet, it is precisely these loving lies that set off the series of endless confessions which become the substance of this film, all the characters having continually lied to others and themselves throughout their lives. As the friends gathered around Panisse prepare to leave the room for the confession, Panisee, having suddenly awakened from his previous stupor, demands they all stay to hear his confession; he has done nothing so very terrible except to have a few extramarital affairs (for which Fanny’s mother, Honorine is asked to leave the room; Fanny herself being absent such she is meeting the train which will bring home her son Césariot) and admittedly has lied to his customers every day, including, we recall, Braun (this volume of the trilogy contains an interesting interview with him, the only member of the cast still living at the time of this restoration).
But having seemingly finished his confession, Fanny having returned with Césariot (André Fouche), the priest confronts the two with yet one other lie, another sin of omission: the fact that they have never told their son that he is actually the child of the now-missing Marius. Panisse refuses—his handsome son, now in military school, being the major being which has given meaning to his life—so the task will be left for Fanny after his death. 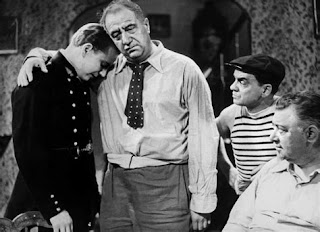 Soon after, Césariot is invited in to see his father, who asks him to sit beside him as he quietly falls asleep, soon after, dying. Before her son must return to school and to the military itself, the grieving Fanny painfully reveals the truth, attempting to explain to the shocked boy that she entered marriage with Panisse only after revealing her pregnancy, while also trying to explain to the now morally hidebound young man that she loved Marius, while he loved the sea. It is one of the most sorrowful and yet fulfilling moments in all of film history, as indeed are many of the scenes of this touching movie; a mother stealing away, as he sees it, his own father to be left with only with his godfather, now his grandfather, while simultaneously he losing respect for his beloved mother.
Several later discussions are amazingly presicent, given our current times, when the group of men inhabiting Cesar's bar begin to discuss whether their particular religion, Catholicism, might not be the true one: what if the Chinese, the Muslims, the Indians might be right, and what might Panisse do if he were met by a god other than the one he had always believed in? I don't think Trump might even have been able to imagine such a conversation, although I doubt his own religious convictions.
After, the boy visits his now godfather, startling César with his new knowledge. César himself, admittedly has not seen his own son for 13 years, after an incident in which the father slapped his son and Marius, so he insists—apparently another half-truth we later discover—slapped him back, an action he has been unable to forgive. Yet, he does know that Marius now works in a garage in nearby Toulon and passes this information on to his grandson.
This always forgiving film (as César states “If sinning made us suffer, we’d all be saints”) now encompasses the seemingly innocent Césariot into this world of petty and sometimes larger instances of mendacity, as he lies to his mother about taking a boat trip to visit a friend, while, in truth, he intends to visit Marius in Toulon.
More importantly, he lies to his father, playing the role of a journalist who needs help with his boat, having already changed the name of his well-equipped small vessel from Fanny to a ridiculously made-up one.
Now, he too, as his father was, has become, at least temporarily, an outsider, and is, in turn, lied to by Marius’ friends, who quickly convince the gullible boy that Marius and they work as a drug-smuggling gang, encouraging the boy to joy in on a heist by allowing him to use his boat. If it is an ugly joke, we must remember that they too are suspicious of his probing questions about Marius—or, for that matter, would be any intruder who enters into their also somewhat isolated sense of community. Césariot, sadly, goes home believing that the father he had sought out, even though Marius himself has been a rather gentle mentor, is an evil man.
Meanwhile, back at home, Fanny has discovered the boy’s deceit (his friend having, in fact, tried to pay a visit to Césariot), but her son is now so depressed about the series of recent events, that it is difficult to truly chastise him.
Again, Césariot visits his grandfather/godfather, but this time he and entire group of friends is confronted by a returning Marius who, finally, insists that it is his turn to speak. And what a speech it is, calling out their lack of honesty, which has given each of them—except for Panisse perhaps—very little in return. Even Fanny must admit that in her refusal to marry him, she has suffered, if nothing else, in silence. While Césariot’s father was indeed a loving man, a good provider, allowing his son an education that Marius would certainly not have been able to, love and joy have been sublimated to normative convention: bourgeois values, class identities, and religious fallacies.
This final speech truly redeems Pagnol’s characters, as this Odysseus has come home to tell them something they have refused to perceive, forceing them to recognize their true failures, even despite the love with which it is also delivered—for Marius still loves, particularly Fanny, and he now is finally able to win her back, while his son predictably moves off into the greatest conformity of all, the military. We can only hope that his mother and true father can later help him be as open-minded as the community he has left. Maybe there should have been a quartet. I still worry for the little César.