Mikio Naruse | Midaregumo (Scattered Clouds, aka Two in the Shadow)

in purgatory
by Douglas Messerli

A couple, Yumiko (Yôko Tsukasa) and Hiroshi Eda (Yoshio Tsuchiya), is looking forward to moving to the United States where he has been reassigned by his company. She is 3 months pregnant with a new baby and is attempting to better learn English when she receives the horrible news: her husband has been struck by a passing automobile and has died.

Against all advice, the driver of the car, Mishima (Yūzō Kayama), attends the funeral, where the dead man’s father and his grieving widow angrily respond, forcing him to quickly leave. We later discover that the accident has legally not been his fault—the car was the problem—but in that car he was also chauffeuring two geishas as he had been ordered to do by higher-ups in his company, a kind of tourist service; afraid of media-attention, the head of the company not only chastises his employee but transfers him from Tokyo to a country outpost.
Despite these setbacks and rebuffs, however, Mishima determines to pay, in retribution, a small amount of money each month to Mrs. Eda, and when he finds that, after having revoked by the Eda family (perhaps having something to do with fact that the forthcoming baby suddenly goes missing in the plot) she is now living in nearby a country inn run by her sister Ayako (Mitsuko Kusabue) as a maid/possible geisha, he pays another visit.
The meeting, once more, is tense, but at least more peaceful, and gradually we begin to perceive that the two, despite that tension, are beginning to fall in love, both of them being absolutely beautiful beings, who dress in western-style dress and obviously share a modern way of looking at the world—along with sharing so many disappointments in their lives. Yumiko, being no longer part of her husband’s world, now refuses Mishima’s monthly payments.
So begins the Japanese film director’s deeply saturated color film, his very last, Scattered Clouds (also titled in some venues as Two in the Shadow). Immediately, this 1967 melodrama, seemed somehow familiar; it was only a bit later that I realized just how much kinship this film has with Douglas Sirk’s 1954 film, Magnificent Obsession, a film wherein Rock Hudson’s character not only kills the husband of Jane Wyman’s character, but later is responsible for her being hit by a car and going blind. And suddenly I realized that in nearly all of the now six films I had seen of Naruse, mostly about women with thwarted loves and lives, were beautiful melodramatic studies very much in the manner of Sirk—even though they lack his deep Hollywood Technicolor treatments or their sometimes almost operatic-like flair (particularly in Sirk’s later works). Yet, I think the comparison is fair, and it helps me to explain why I was drawn to Naruse time and again. I now intend to see as many of films of as I possibly can. 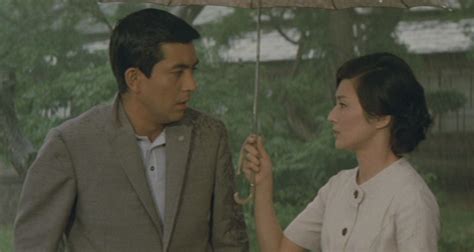 If in this film, the two unlikely lovers are increasingly brought together, and have quite clearly grown to care for each other, we know, simply from Naruse’s images of heavy rains, trains rushing off into space, and, most notably, their observation of another accident, in many ways similar to Eda’s, that their love cannot be fulfilled. They’re not just in the “shadows” of each other but are unfortunately outcasts to the societies to which they once belonged. With its deep censure of the self and its inability to speak openly of illness and death, their world ostracizes people like them. Might the handsome Mishima driven a bit more carefully and discretely? Did Yumiko abort her baby or simply have a stillbirth? Both of these very beautiful people are doomed it appears by their very commitments and successes. Mishima, even though beloved by his fellow employees, is yet again to be sent away, at film’s end, to a more remote location, Lahore—a place in the Japanese imagination that is the birthplace of cholera.
Without any other financial support, we suspect, Yumiko may well have to submit to becoming a geisha in her sister’s employment. The few hours of boating and enjoyment they experience are set against not only “scattered” clouds but an endless downpour of rain and unfortunate events.
By film’s end, we can only hope that these remarkable individuals might find a way to climb out of their purgatory, meeting up finally in the urban center to live the life to which they might otherwise have been destined. But, as in so many of his films, Naruse presents us with little hope for the “best of all possible worlds.” And their departure is a true tear-jerker in the manner of so many Sirk films. Independent-minded women particularly do not fare well, nor working men who have lost the faith of the firms which they so faithfully served (see Ginza Cosmetics and the brilliant, A Woman Who Ascends the Stairs). If Naruse’s films don’t always have the polish of Ozu’s or the innovation of Kurosawa’s films, in my mind he is still one of the Japanese film masters.