Anita Loos and Jane Murfin (screenplay, based on the play by Clare Boothe Luce), George Cukor (director) The Women / 1939

It had been many years since I last George Cukor’s The Women, and I can’t say that it has entirely aged well. At many points, Clare Boothe Luce’s witty language (spruced up to fit into the Film Production Code by Anita Loos and Jane Murfin) the film is still fun in a truly “bitchy” manner, particularly through gossipy chatter of Sylvia Fowler (Rosalind Russell) and Edith Potter (Phyllis Povah) and others of Mary Haines’ (Norma Shearer) supposed friends. Sylvia has gotten news from a manicurist that Mary’s husband Stephen has been having an affair with a perfume counter clerk, Crystal Allen (Joan Crawford)—and within hours she and her friends have passed it on to one another, even gathering a kind of small scouting party to check the counter-clerk out.
At moments their comments, especially those of the lesbian-like writer, Nancy Blake (Florence Nash), are brilliant, presenting a much different view of New York house-wives that any film after far into the 1960s presented. These women are not only quite independent, but—at least two of them, Mary and Peggy Day (Joan Fontaine)—are pleased with their companions. If you might have ignored Cukor’s credits, wherein he equates each of these figures with animals, you might even think that these smart women are proto-feminists. They’re certainly not stupid or passive.

Sylvia Fowler: Well, heaven be praised, I'm on to my husband, I wouldn't trust him on Alcatraz, the mouse.
Peggy Day: Sylvia, you oughtn't talk about him like that! Why, I think it's disloyal!
Sylvia Fowler: Oh now, listen Peggy, do we know how the men talk about us when we're not around?
Nancy Blake: I've heard rumours.
Sylvia Fowler: Exactly... And uh... While we're on the subject, have either of you wondered whether the master of this maison might not be straying?
Nancy Blake: I haven't.
Sylvia Fowler: Well, for all you know Mary Haines may be living in a fool's paradise.
Nancy Blake: You're so resourceful darling. I ought to go to you for plots.
Sylvia Fowler: You ought to go to “someone.”
Yet, we soon perceive that, like the women of whom Elaine Stritch sings in the musical Company, these are “the ladies who lunch.” When they’re not busily gossiping or, metaphorically speaking, stabbing one another in the back, they shop, attend fashion shows, and, yes, lunch. Indeed, I
had never before seen the long center of this movie, a scene in the middle of this black-and-white film that, like The Wizard of Oz (a film that appeared in the same year), was shot by Cukor in color: a long fashion parade that might almost have been stolen right out of a Ziegfeld Follies routine. Many of outrageous costumes by Adrian, in fact, appear to have been inspired by the Emerald City. 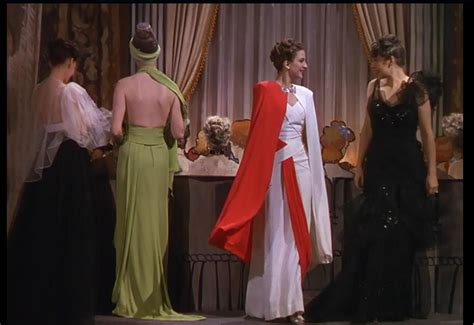 Certainly, there are witches here by the dozens. Not only, as Mary’s intelligent mother tries to tell her, are these “friends” eager to dish the dirt, but almost force Mary to confront her bedroom competitor and seek a divorce from the husband she still loves. And if their mean behavior were not enough, Cukor drags in a real “witch” in the form of Hedda Hopper (playing Dolly Dupuyster) who takes the affair to new levels by plastering the news all over the daily papers. Like the character Mrs. Lord (Mary Nash) of the The Philadelphia Story—a film that was released the following year—Mrs. Morehead (Lucile Watson) advises her daughter to simply wait out her husband’s current obsession, just as she did in her own long marriage. (Two of the actors in The Women also appeared in The Philadelphia Story, Ruth Hussey, and Virginia Weidler, the latter playing Mary’s daughter.)
If the film is sometimes fun in its satire of female gossip, it turns very sad, however, on the train to Reno, particularly since two of the Reno ranch tenants, Mary and Peggy, really don’t want their

divorces. The script and Cukor try to keep up the spirits of the clever play by introducing the hilarious, serial divorcee, The Countess De Lave (Mary Boland) and the ranch owner, Lucy (Marjorie Main). Peggy, who finds herself pregnant, returns to her husband; but when Mary attempts to call him with hopes of a reconciliation, he calls her, instead, to let her know, since the door has now gone through, about his own marriage to Crystal.
Even if, a bit like All About Eve, everything does work out in the end—particularly since the nasty Crystal has now taken up with The Countess’ most recent husband, a Reno cowboy turned, through her money, radio broadcaster—there’s something more than sad about the horrible behaviors of all, male and female, involved. And we know by film’s end, that the lovely mother that Mary portrays at the beginning of The Women will never quite be restored. She may be the “owl,” which her mother represents, but she will never again be the loving wife and mother the work’s first scenes.
In a sense, The Women is a kind of playing out of the Garden of Eden myth, but from the perspective only of Eve, as if Adam didn’t truly matter. In such a world, as one character suggests early on, there is no forward movement, no possibility for a new world: “everything is going in circles.”