violence does not stop violence
by Douglas Messerli

Danièle Huillet and Jean-Marie Straub’s 1965 film Not Reconciled or Only Violence Helps Where Violence Rules is a fairly close adaptation of Heinrich Böll’s 1959 novel, Billiards at Half-Past Nine. As in the book, Straub and Huillet tell the story the from the beginning of the century through the two major wars of the Cologne-based Fähmel family, from Heinrich (Heinrich Hargesheimer) an architect who has built one of the city’s major cathedrals, his son Joseph (Joachim Weiler), and Heinrich’s 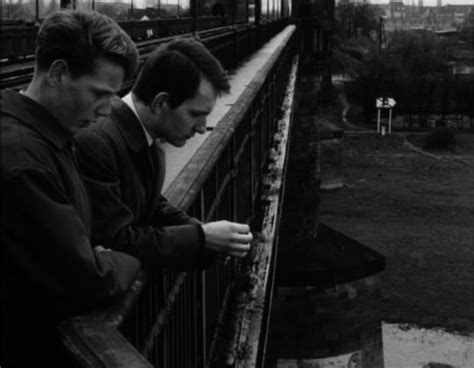 grandson, Robert, a demolition expert who has blown up his own grandfather’s cathedral during World War II. They meet after the war, re-living their long history in a single visit, although Straub presents these memories in such discrete entities that a first-time viewer might have difficulty in piecing them together and even in recognizing how these family members and their individual histories are inter-related.
As film critic David Heslin wrote of this film in 2017, the movie, with its varying rhythms of leisurely scenes and quick shifts in time and space feels “like a film that is simultaneously fast and slow,” seemingly alternating, at moments, as I would describe it, with an almost epic-like narrative within a series of tightly aesthetic cuts that reveal continuities and shifts within and outside of this family who lived through two of most dreadful wars of the last century, mostly as “lambs” or pacifists—although Robert’s involvement in the Nazi period is somewhat ambiguous—as opposed to the surrounding “buffaloes” such as the Robert’s former schoolmates: Schrella (Ulrich von Thüla), a left-wing activist; and Nettlinger (Heiner Braun), a ruthless Nazi enforcer of authority. 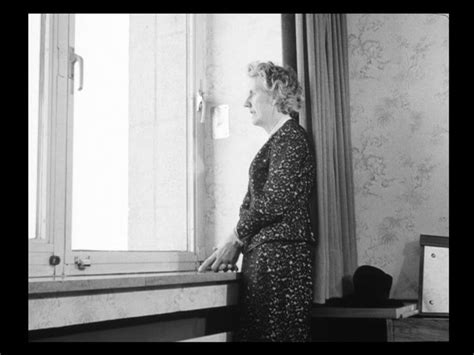 Yet neither the director nor Böll draw distinct lines, for the lambs, it is clear, have helped the buffaloes to survive, living amongst them for all these years, in their pacifism refusing to properly speak out against what has in German culture been happening since the very beginning of the century continuing into the post-War period in which they now exist.
As this film’s title suggests, even as the post-War politicians try to bring together the right and the left, there is yet to be a full “reconciliation.” Even though the terrible Nettlinger has attempted to arrange for his childhood enemy Schrella to be pardoned for his assignation plot, Schrella stalks out of the restaurant in contempt, refusing to help relieve Nettlinger’s guilt for his war-time behavior.

The most shocking moment is when Robert’s well-dressed mother, Johanna (Martha Ständner), politely asks the family maid whether the gardener is working that day. When told he is not, she quietly but forcefully walks into the garden shed, opening a drawer where, evidently, the gardener keeps a pistol. Taking it with her, she leaves, enters the balcony of her home, and calmly shoots at a neighboring politician breakfasting on own balcony nearby. Just as Schrella’s assignation attempt resulted in only a few injuries, so too does her shot miss its target, suggesting either that such acts of violence are meaningless or within such a truly militaristic society have utterly no effect. If nothing else, we are forced to perceive that Brecht (from whom the subtitle has been appropriated) violence does not help rid us of violence. Guns do not stop guns.
What we see in this mid-1960s film—during a period in which very few German-based film directors were bringing these issues to the forefront (Heslin mentions Alexander Kluge as an exception), these two French-born figures were tackling the difficult issues which later would be the subject matter of the New German Cinema makers such as Wenders, Schlöndorff, and, of course, Fassbinder, whose great The Marriage of Maria Braun, of a decade later, deals with some of these very concerns.
If nothing else, this Huillet/Straub film made me go out to buy a copy of the Böll fiction, which I had never previously read, and I again appreciated his early post-war perceptions—far more than Grass’ more fantastical and sanctimonious ones. And I will also be attending to more of Huillet and Straub’s films in the future.