travelers without a destination
by Douglas Messerli

Although I had seen Bernardo Bertolucci’s 1990 film, The Sheltering Sky when it premiered, I wasn’t truly looking forward to watching this rather long (138 minutes) film again. I had taught Paul Bowles’ original fiction several times at the University of Maryland, and I remembered the film as a rather plodding and straight-forward rendition of a work that, at least when I first read it, seemed far more suggestive and even mysterious. Bowles himself has written, “The less said about the movie the better.” As writer Frederic Tuten commented on my review, "Hard to make a film of that novel. Much of it is a gorgeous National Geographic film."
Perhaps I should add that in Sun & Moon 11 I published several small pieces by Paul Bowles as part of his "Points in Time."
I knew something of the lives of the author and his amazingly talented wife, Jane, but I had not yet read all of their works nor quite perceived the extent of their open bisexuality.
This time around I liked the movie much better, although I still found it, at times, a rather a flat-footed version of the original. But then, perhaps that was part of the problem with the original fiction as well, wherein the character Port Moresby is clearly a kind of heterosexual stand-in the homosexual Bowles and Kit, another heterosexual version of the lesbian Jane. Perhaps the author, writing in 1949, was simply trying to make his couple more palatable to the general audience at a time hostile to LGBTQ identity (long before there were even such a term). I feel he was also quite-reticent about his gay identity, particularly in the US, while he felt freer to express it in Central America and Morocco, despite consorting with major gay American and British figures—he was a music student of Aaron Copland and became good friends with Gertrude Stein, Christopher Isherwood, Tennessee Williams, and Gore Vidal, while later drawing nearly every gay writer and poet to his residence in Tangiers, including Allen Ginsberg and William Burroughs. Even my Spanish book agent joked that when she was young her mother would not allow her to visit the Bowles’ in Tangiers. My former agent is now dead.
Perhaps his fiction was simply a kind of fantasy to play out the difficulties of this bi-sexual couple in a more simplistic context than their real lives allowed. Yet, in the novel there are all sorts of hints that something else was going on, while in Bertolucci’s film there are only a couple of occasions when the screenwriters suggest there might be something more here, as when Kit (Debra Winger), now attracted to their handsome traveling companion, George Tunner (Campbell Scott), declares that it is not her problem as much as it is her husband’s. Mostly, Bertolucci simply skips over any attempts at explaining what these “travelers,” as opposed to “tourists” are truly seeking.
In short, I now feel there was something inherently dishonest in Bowles’ original work, which shows up in the Bertolucci film as a kind clumsy lie.
But if you forget that there is anything even slightly autobiographical about this work, or that an openly gay man is writing about the collapse of the heterosexual romance, the movie actually works quite nicely. It is beautifully filmed by cinematographer Vittorio Storaro (who won awards from BAFTA and The New York Film Critics Circle), who, after introducing the credits in a black-and-white paean to New York City—presumably to establish the period and the characters’ roots—turns his lens to tawny browns and yellows to establish the Moroccan and Algerian landscapes.
Moreover, the music by Ryuichi Sakamoto, combining Arab calls to prayer, North African music, and a lush Hollywood score, is equally memorable, winning him several awards as well.
If at first I was a bit disturbed by John Malkovich’s deadpan portrayal of Port, I realized by film’s end that it was not, perhaps, so very different from the kind of high-cultured disdain of Bowles himself, who narrates a few passages (as an observing dinner guest in a hotel restaurant).
Winger as Kit is a bit more problematic. In her perky, raspy-voiced characterization of Kit, she doesn’t quite fit the superstitious and problematic figure who, on some days, we are told, sees signs in everything about her, falling into bouts of inexplicable fears and depression. In this version she seems far more hardy and ready for battle than the character who Bowles describes needed Port to make all decisions so that she might not be responsible for life. Here, she becomes the far dominant figure, as Port moodily moves through the desert spaces, particularly after he begins to suffer the signs of Typhoid Fever. She, in fact, appears to be the far stronger individual in their relationship, and even attempts to nurse her dying husband back to health. 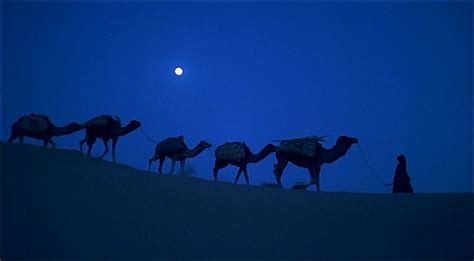 Only after his death does she fall again into near passivity, flagging down a local Bedouin group, whose leader takes her on by dressing her up like a boy (another almost unobtrusive reference to Jane’s identity) so that he might sexually assault her. What is interesting about Bertolucci’s portrait of Bedouin life is that it is the men who wear the burkas, while the women openly expose their faces.
In her passivity at the end of the film, it is almost as if Kit were allowing into her life all of the others whom Port (and she) had previously attempted to escape from, including Tunner, whom Port plots to send off to other desert frontier cities to keep him away from Kit, and the Lyles, the nasty British travel guide writer and her monstrous adult baby, Eric (the always wonderful Timothy Spall), who she keeps at her side by denying him money or any of his adult desires for drink and, presumably, male companionship. He represents one of the most notorious examples of a mamma’s boy outside of Whatever Happened to Baby Jane? or Psycho.
Yet, strangely, it is precisely these reprehensible people who this generally incompatible couple need: if nothing else the Lyles bring some comic relief to their unhappy lives, and Tunner provides (perhaps for both) some empty-headed romance, as well as some financial stability that Port and Kit might seek, particularly after being robbed of both billfold—although Port does retrieve that—and his passport, which he refuses to retrieve in order to escape further encounters with Tunner. One might almost argue, in the end, that the Moresbys' problem is that despite their adventurous personalities, they won’t dare themselves to hang out with all the wrong people, who could, in fact, bring them closer to one another. They want to be travelers without a true destination, making them, in fact, more tourists than the people whom, they describe, “when they arrive somewhere immediately want to go home.” Tunner, indeed, in his attempt to reign in Kit’s almost mad wanderings, is perhaps more of a true world traveler than Kit and Port were ever destined to be. In the end, Kit simply disappears into thin air, while the handsome Tunner stands still as a testament, if nothing else, of himself and his jaunty American-ness.
Perhaps the reason The Sheltering Sky’s major characters both die and disappear is the fact that they simply cannot put down real roots. The images of Manhattan in the credits are all an illusion. They might have lived in that city (actually for a brief period of time they resided in a Brooklyn Heights house with other noted gays and open-minded artists W. H. Auden, Carson McCullers,  Benjamin Britten, Richard Wright, and Gypsy Rose Lee), but they could never stay too long in one place, which is really what Bowles’ novel and Bertolucci’s film are all about; endless traveling can ultimately look a lot like tourism, and wise Americans such as they were can easily become ugly.

Posted by greenintegerblog at 11:09 AM