Late last year my art-curator husband came home from the film The Square expressing his dislike of the movie. Its visions of how curators make their decisions and what they do is disturbing and wrong he argued.
In fact, after seeing the movie for myself the other day, I’d argue there are very few curators shown in this film and the work is centered almost entirely on the museum director, Christian (Claes Bang), who is basically a well-meaning gentleman with some very human flaws which, giveen his high voltage position, where he has few moments before he is not trotted out for an interview or a speech to powerful museum supporters, become all too apparent. 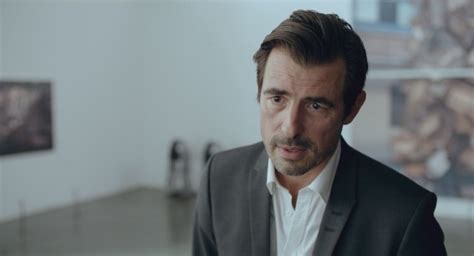 Christian, indeed, does remind me of museum directors I know, many dedicated individuals who want to show daring contemporary art, yet must daily cope with finances just to keep his or her museum, in this scase the X-Royal art museum in Stockholm (formerly the Royal Palace) open. And some of director Östlund’s satiric riffs—for example, when the chef attempts to explain what museum guests will be eating that evening, the crowd rises en masse and like a herd of buffalo charge to the banquet table—are very close to the truth. I myself have seen it, perhaps even participated in the rush to devour the food.
More importantly, however, I feel that the film is not really about the museum world, but merely uses it as a metaphor to explain the discrepancies of Swedish society. Although the arts are highly supported by the government in Sweden, they too must work to keep their doors open, attempting to wow their audiences while reflecting Christian’s tastes in conceptual and performative art that raises serious questions about art and the society in which it exists. Although neither Howard nor I share Christian’s aesthetic tastes, we must comprehend the fair-mindedness of the film’s title art piece, “The Square,” by Lola Arias (I believe there is no such artist, but there an Argentinian songwriter and performer by that name), a work described in the artist's statement: "The Square is a sanctuary of trust and caring. Within it we all share equal rights and obligations."
In short, Christian has chosen a work of art that asks us to recognize what we share in any society or space with others, responsibility for one another while still allowing freedom to be ourselves, a rather lofty goal I might suggest.
In a sense, this reflects the entire doctrine of the good-doing and good-thinking Swedish vision of society (what several critics have described as a correct-thinking mentality). Yet Östlund’s work goes out of its way to demonstrate that the truth is not always what it might seem. If the sociable Swedes outwardly care for one another, they rush to work each morning ignoring the pleas of poor and immigrant citizens for a few coins. Time and again they rush forward, not just for the banquet table, but simply to get to work in order to save their “fair” place at the table. Christian, who is basically more caring than his neighbors even falls for a frightening performance by con-men, as a woman rushes forward yelling “He is going to kill me,” while a man menacingly runs after her. When the museum director and another man attempt to protect the woman and stop the attacker in his tracks, they soon discover that their wallets, cell-phones, and in Christian’s case, even his special cuff-links, have been stolen.
Like many in our society, Christian has basically put his entire life—personal and professional—onto the phone, and the cufflinks were given to him from his presumably now-dead father. Surely his wallet, even if he can easily afford the money within, must contain numerous credit cards and other pieces of information necessary to live his daily life and which may be used for other nefarious purposes.
I don’t have a cellphone thankfully, but my wallet was recently pickpocketed, and it took weeks to get new cards, licenses, and medical confirmations.
Christian’s communications assistant, Michael (Christopher Læssø) quickly finds the location of the cellphone, a large apartment complex, suggesting that Christian write a threatening letter to all its inhabitants. Christian reframes Michael’s crudely framed language, but still goes through with it; yet when they arrive at the complex with the messages, Michael refuses to do it, and his boss is forced to take on the improper task. And it is at this moment when we begin to realize that even the most charmingly officious of those in this society have far darker aspects underneath their handsomely hirsute bodies and their well-tailored clothes.
Yet, this is after all, a well-bred society, and amazingly, through a delivery at a local 7-Eleven, Christian receives a package containing all of the missing items, cards and money intact.
At the opening of the show, Christian again runs into the American correspondent with whom he had previously had an interview, Anne (Elisabeth Moss), who seduces him into her bed and, after having sex with him, demands his condom.
Östlund’s films have often involved the strange politics of male/female relationships, but this surely is one of the oddest, as he refuses to give up the condom; if at first it may seem he is hiding the fact that he did not actually have an orgasm, when he finally hands it over, we realize he is actually fearful that this woman, who later claims she doesn’t want simply a one-night stand, might impregnate herself with his semen. After all, women in this director’s films have played meaner games (see my review in My Year 2017on his Force Majeure).
Soon after, Christian’s reserve and attention are even further strained when he receives another delivery at the same 7-Eleven, this one threatening revenge. A young immigrant boy, living in the same complex with the robbers, is accused of robbery by his own family, and wants Christian to absolve him. But by this time the museum director’s openness and sense of fairness has perhaps been tested too many times, and he refuses. It is time to attend the business for which he has been hired. He too has suddenly become one the many Swedes rushing through the streets to attend to their work. In a strange way (or, perhaps, I should say, in a predictable way) he too has retreated from “the square,” the public marketplace, to perform responsibly for himself and his institution. 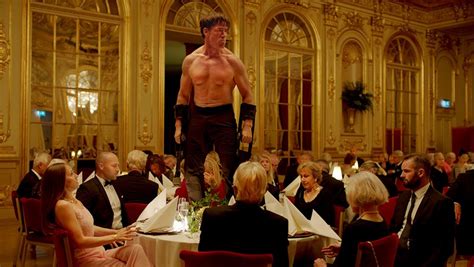 But it is too late, for he has now too thoroughly revealed his own humanity. A performance piece at an opening dinner for “The Square” goes awry when the performer Oleg Rogozjin (Terry Notary), acting as if he were a threatening chimpanzee, terrifies several of the women patrons, a scene that reminds me of the hostesses strange dinner-time performances in Luis Buñuel’s Exterminating Angel.
A symposium on the new art work is interrupted by an audience member suffering from Tourette’s Syndrome.
While he has been out of the office, the publicity department and their two out-of-museum consultants have developed their own publicity campaign featuring a small blond child entering the square to suddenly be blown up. Christian’s and the artist’s gesture of civil community has, without

his knowledge, been turned into a statement of rightest protectionism, or, at least, a statement that suggests it is dangerous to enter a public forum. After the clip goes viral with 300,000 YouTube visits, the press angrily attacks the museum, and Christian realizing his failures, is forced to resign.
Even when the former director attempts to return to the public world, trying to visit the young boy accused of acts he did not commit, he is told that the family has now moved. True public interchange, so the movie suggests, is a truly dangerous thing.
Yet Östlund’s work, I would argue, is not simply a skeptical or satirical statement. Christian, a bit like the similarly named character in John Bunyan’s Pilgrim’s Progress, is a man who having suffered the many troubles of believing has done so in order to survive in a meaningful spiritual life.
Obviously, I don’t truly agree with Howard, and I do understand, although I am still a bit surprised, why this film was chosen as the winner of the Palme d'Or at Cannes.

Posted by greenintegerblog at 8:52 AM