heart of darkness
by Douglas Messerli

The director of the 2018 documentary Three Identical Strangers, Tim Wardle has encouraged critics not to reveal the ending (or even the second-half) of his film about the triplets who suddenly discovered, at age 19, the identities of one another. Yet, I’d argue that it might be better to know the second half of the film without knowing the early, rom-com, part. In a sense, it is like asking one to read The Heart of Darkness without knowing that things go bad for Kurz and other Belgian occupiers in the Congo, which misses, perhaps, the very reason one might wish to read that book, or, in this case, take a visit to your local movie theater to see this remarkable piece of filmmaking. 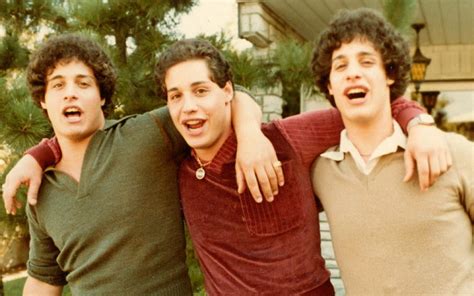 If you don’t want to know anything about this movie before seeing it, please feel free to skip this review. It has never bothered me to know as much as I can about a film before seeing it so that I might better comprehend and enjoy its images.
As the many critics writing on this film have revealed is the wonderful accidental encounter by Robert Shafran, a 19-year old freshman at Sullivan County Community College in upstate New York, of a series of people who greeted him with great enthusiasm, pats on the back, and even kisses on his very first day on campus. That alone might have made anyone suspicious something was amiss, but the fact that many also called him Eddy might have made any of us feel we were in a slightly surreal experience. When he finally met his dorm room mate—who, recognizing that Eddy (Galland) had previously determined to not return to campus and was slightly different from his new roommate—asked Robert whether he was a twin, the news might have set off shocks of incredulity to the new freshman. We never discover in this film why the evidently popular Eddy had decided not to return to the community college or how Robert had determined to attend the very same institution, a semester later, but it clearly did trip off clues that something was very strange; and before he knew it, Robert was in a small phone booth with his new roommate dialing up Eddy Galland and, soon after, speeding in his elderly car about two hours away to meet, at the doorway of the house, his mirror image.
Discovering that they not only shared the same birthday, the same adoption center, and many of the very same habits, newspapers, particularly Newsday, quickly glommed onto the news item, much to the delight of the sudden discovered twins. Meanwhile, as their stories and pictures begin to appear in local papers, another young freshman at Queen’s college in 1980 saw himself in the pictures that he witnessed and, particularly, after confirmation from his mother and his proud father, nicknamed “Bubbalah,” he too called the media, where after suddenly the long-lost twins became triplets.
The euphoria of the discovery of two other versions of yourself swept up the three boys into a new world of self-love, propelling them almost immediately into, as an aunt describes it, a world in which the 3 former wrestlers joined one another of the floor in a kind a roll-around that she describes as a somewhat like “puppies.” The three, Eddy, Bob, and Dave hit all the talk shows, dressing alike, talking alike, and interrupting each other’s comments while commenting on their shared interests in the same kind of women, Marlboro cigarettes, and taste in color. There had been numerous other pieces on how rediscovered twins or even those knowledgeable of their kinship, shared conversational habits, patterns of thought, and tastes, and these triplets simply fueled that concept, as newspeople promoted their similarities as opposed to questioning their differences. As they later assert, we wanted and were encouraged to show how much we were like one another without anyone asking anything else.

They had, however, big differences in their upbringing. Eddy, raised by a strict and authoritarian school teacher, did not have a close relationship with his father. Even in interviews, Eddy’s father still seems to have no clue why he did not have a deep connection with his son. Robert’s father, a physician, although deeply supportive of his son, was often missing; Bob’s mother was herself a successful professional. It was David’s more lower-class father and mother with whom the trio most bonded. If you sense a series of class differences here, it is no accident, and might have been one of the first things that the triplets questioned about themselves; the Jewish adoption agency purposely put them into families of different financial and parenting skills, having already also helped their adoptions of older sisters for the three.

If the adopted families grew angry for not having been assessed of the fraternal relationship of their beloved sons, the triplets themselves moved in together in a bachelor apartment, showed up at nights in many 1980’s bars and dancing clubs, and even appeared in a Madonna movie. You might say they became enamored to their own triplicate identities. How might anyone not have been: you who were alone most of your life, and who, in this case of all 3, sensed something missing in those years, acting out hostility in their early teen years. The trio even opened up their own SoHo restaurant, Triplets, serving up steaks and dancing with their customers each night. In the first year they made more than a million dollars.
If it’s delight to see these smilingly toothy, pudgy fingered, curly-haired boys in their early encounters, things soon begin to fray. Each of them found women whom they married, not, as they had previously argued, all similar in type. Eddy, who fought hard to keep the families they created together, was devastated when his broth Robert left the business, unable to work successfully with the other two. And, although David remained close to Eddy, living across the street, he could not stop his brother’s eventual suicide. Darker elements had existed in all our lives which involved a sense of abandonment, and later, of having been forced to live a life over which they had had no control.
When the Pulitzer Prize-winning author Lawrence Wright (The Looming Tower, Going Clear) began to write about “twins” in the late 1990s, he discovered a great deal of information that suggested that the triplets and several twins had been intentionally separated from their birth mothers by late child psychiatrist Peter Neubauer, an Austrian Jew who had fled the Holocaust, using the Jewish Louise Wise Agency. The experiment, which might have been interesting had all parties been alerted to its existence, was an attempt to determine the difference between nature vs. nurture.
If Wardle’s film begins rather solidly on the side of nature—these guys, after all, seemed at first to be so very alike that only nature could have explained it—we gradually come to perceive that perhaps their upbringing did make an enormous difference. Robert admits that too had had suicidal thoughts, but that he couldn’t bring himself to carry them out. David, although stunned by events, seems rather blessed by having the beloved “Bubbalah,” as his father. Perhaps wealth and permission are not the things that most sustain an individual this film suggests. Just a daily hug might make all the difference.
Yet, the even darker story of a purpose experiment on human beings, the findings of which will never be published and whose files cannot even be opened in 2066, are the most sinister elements of this tale. Why can’t the overseeing Jewish Federation open those Yale files, or why won’t Yale themselves admit that they might be opened? One of Neubauer’s unwitting confederates perhaps says it best. Those twins who don’t know about each other may be better off, without being torn apart by the news that these triplets had to endure. If the actions of those with they worked were indeed corrupt, cynical, and even inexcusable, the pain these three brothers had to endure by the discovery of the truth might not be worth it. Yet, at least the two remaining brothers now know one another, and speak out strongly about the truth; and that is the undeniable power of Wardle’s film.

Posted by greenintegerblog at 4:09 PM