the winner
by Douglas Messerli

Swedish director Björn Runge's 2017 film, The Wife, based on a novel by Meg Wolitzer, is not a great movie, although by the time I finish this review you might change your mind.
The rather pedestrian plot keeps getting in the way. Joe Castleman, evidently a great American novelist (writer of what appears are rather plot-driven novels, something that doesn’t exactly excite the Swedish Nobel Literary Prize committee, although this year, in complete chaos, we can no longer know), lies sleepless “waiting for the call.” I can’t quite imagine any great writer, given the whimsy of that Nobel committee, expecting a “call.” But that’s the story, always so intrusive here that it gets in the way of the cinematic revelations.

Joe Castleman (Jonathan Pryce, living in a “castle” of his own making) does get that call, and immediately—and even before that call—we recognize him, as we all know many a writer to be, as a narcissist, who seems to “expect” greatness, even though we quickly suspect he has no reason for that expectation. Even though we already don’t quite like this character, we pay attention simply because his wife, Joan (Glenn Close) seems to care for him, even allowing him to have sex, clearly unwanted, to relieve his tensions about the possible telephone message.
The plot is already, we perceive, almost a melodramatic-driven notion of what literary greatness is (not actually that very different, in some respects, from Mark Robson’s semi-turkey of a movie about a Nobel Literary winner, The Prize). How I wish this film were simply about a literary celebrity instead of a Nobel Prize winner; surely it might have made more sense.
But clearly Wolitzer and writer Jane Anderson wanted to up-the-ante, so to speak, to make their narcissist writer an international figure in order to give greater significance to “the wife,” who, we gradually discover, actually has edited or perhaps actually ghost-written her husband’s books.
To some viewers, surely, this will come as a slow narrative surprise. But the tensions, the immense mix of expressions that cross the brilliant actor Glenn Close’s face at every moment, quickly gives it away. We hardly need the flashbacks of their youthful encounters, she (played by Close’s own daughter, Annie Starke), and he (played by the handsome Harry Lloyd) to reveal the truth—although we do need these inserts just to comprehend why these beautiful youths fell in love, despite Castleman’s own marriage at the time.
The true issue of this film is a study about that love. Why has Joan kept the secret all these years, suffered through her husband’s numerous affairs, accepted the role of a simply supporting housewife, when she, after all, was the genius behind his career? 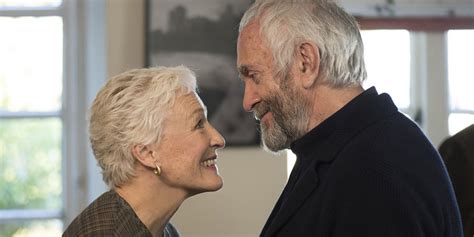 I suppose we could explore hundreds of great writers and their wives’ relationships. Dickens apparently abused his wife, as Joyce did his beloved Nora; didn’t poor Alice spend much of her life (as did the young Joan) typing up her lover Gertrude’s almost ineligible manuscripts. The list goes on. Joan, in this film, is complicit in the secret of his success (only later admitting her role as “kingmaker”) because of her love. She may be angry, even bitter for all the years in which she has had to stand aside while her husband basked in the endless praise of his peers; but like so very many wives (and occasionally husbands as well) before women’s liberation (and I suspect still today), she sacrificed her life to the man she vitally loved.
She has lied to her children—in particular, her troubled son, David (Max Irons)—to their friends, and now must supposedly lie to the world about her husband to help create him as a force of culture, although we recognize his near-complete failure. In fact, this couple, I am sure like so many thousands of couples, worked together to create a beautiful lie of success, particularly women of a certain age, who dressed their husbands, caressed their inadequacies, built up their egos, and made their homes a greeting place for others.
Yes, this is a familiar melodrama, which might have been played out even in a 1950s film such as The Man in the Grey Flannel Suit and so many others. But here, we have something different simply because of Glenn Close.

Never before (well, seldom before) has an actress so portrayed the numerous contradictory feelings she has. In one shot, her face flashes signals of love, anger, bitterness, hate, and love again for the man to whom she is married. In a marvelous scene with the sleazy would-be biographer (Christian Slater) she plays a tough, totally perceptive opponent, a slightly drunken and bitter housewife, and a slightly flirtatious woman of an older age—without giving up any of her personae. This is, Close makes clear, a woman of such depth that we don’t quite know what to make of her. Joan Castleman is a woman no man should or could possess, a genius at knowing how to keep the man she loves while expressing her own identity—if only one might look deeply enough or might ask the right questions.
On the plane home from the Nobel fiasco (rather appropriate in hindsight), she promises her son that she will sit down with him and her daughter and tell them the “truth.” Strangely, and despite her fierce self-honestly, we’re not sure what she will tell them: that she has actually written all of their father’s books, that she has simply collaborated with him making editorial decisions, or allowing them to live in the myth of their father’s literary greatness. Perhaps “truth is not always truth.”
If Joan might not truly deserve the Nobel won by her husband, the actress certainly deserves an Oscar for this role.