behind closed doors
by Douglas Messerli

Many writers about cinema have described Jean Cocteau’s first film, The Blood of a Poet (1930), as a surrealist work, a fact which the director himself alternately denied and accepted, insisting he was the first to use such imagery. I see the work less as surrealistically conceived—as Julia Levin has argued, Un chien andalou (1928) and L’Âge d’or (1930) contain images that are far more frenetic and dissociative than Cocteau’s slower-paced and fairly dreamy piece—than it is a work of poetic symbolism, whose narrative is more associative than it is radically conceived.
As Cocteau later wrote:

It is often said that The Blood of a Poet is a surrealist film. However, surrealism did not exist when I first thought of it. the interest that it still arouses probably comes from its isolation from the works with which it is classified. I am speaking of the works of a minority that has opposed and unobtrusively governed the majority throughout the centuries. This minority has its antagonistic aspects. At the time of Le sang d’un poète, I was the only one of this minority to avoid the deliberate manifestations of the unconscious in favor of a kind of half-sleep through which I wandered as though in a labyrinth.

I applied myself only to the relief and to the details of the images that came forth from the great darkness of the human body. I adopted them then and there as the documentary scenes of another kingdom.

That is why this film, which has only one style, that, for example, of the bearing or the gestures of a man, presents many surfaces for its exegesis. Its exegeses were innumerable. If I were questioned about any one of them, I would have trouble in answering.

My relationship with the work was like that of a cabinetmaker who puts together the pieces of a table whom the spiritualists, who make the table move, consult.

The Blood of a Poet draws nothing from either dreams or symbols. As far as the former are concerned, it initiates their mechanism, and by letting the mind relax, as in sleep, it lets memories entwine, move and express themselves freely. As for the latter, it rejects them, and substitutes acts, or allegories of these acts, that the spectator can make symbols of if he wishes.
If this seems to deny my observation about its poetic symbolism, I would argue that it merely proves my point, that he himself  needed to deny the notion, while allowing the viewer to reiterate it in his or her own manner. Surely, his symbols are not standard literary symbols nor even Jungian-like archetypes to be easily assimilated by the culture at large, but are far more of a personal kind, representing images, as he puts it, that “came forth from the great darkness of the human body.”
In fact, this is a seemingly biographical work, containing images of suicide and death likely influenced by the author’s own youth, when in his father committed suicide.

Moreover, his film is a kind of retelling of the Pygmalion myth. The artist (Enrique Rivero, at first wearing a wig that might remind one of the 18th century, but later peeling it off to reveal a head of dark black hair) is described as a poet, although his poetic acts, in this case, mostly involve painting (an activity in which the multi-talented Cocteau was also involved). Like the great Renaissance artists which the movie invokes, Pisanello, Paolo Uccello and Andrea del Castagno, he becomes a “painter of enigma.”
He first begins to create an image of a male, but quickly rubs it out to create a female image, which, with a knock on the door by a seemingly intrusive friend (Jean Desbordes), and the artist suddenly rubs out the woman’s lips. But in his hurry to do so, he has imprinted them unto his hand, and when he goes to wash off the paint, it begins to bleed, as he discovers that he cannot erase the lips he originally painted.
Although he quickly dispenses with the intruder at his door, he finds that he cannot escape the lips, which quickly attach to a nearby marble frieze, whose arms are missing. Coming alive, the female figure commands that he step into the mirror, clearly a command for him to look into himself and his past. Like Cocteau’s later Orpheus, this half nude artist finds his way into the mirror, discovering himself in a shoddy hotel, where he voyeuristically peers into several keyholes, witnessing a hermaphrodite shifting sexes before his eyes, and opium smoke whose actions are played out with 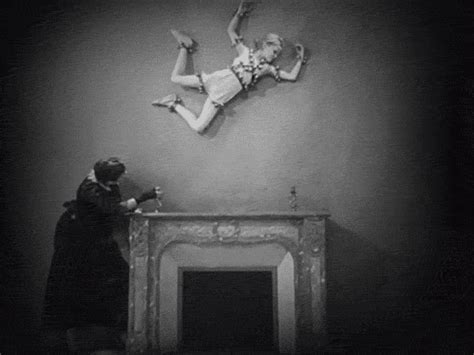 shadow puppets, a terrified young girl who flies about the room in order to escape her whip-bearing mother, and a man who hands him a gun, explaining how to use it and commanding him to shoot himself; fortunately when the artist does so, he remains alive, or does he?
Finally, he cracks back through the mirror into the present (or is it the past?), since soon after he recalls a snowball fight from his childhood, where several innocent boys fight, until the two school bullies show up, throwing a snowball at a young boy who dies, his body remaining through much of a later scene—until the body is finally consumed (swept into heaven one presumes) by a black guardian angel (Feral Benga)—while a clearly bored woman is playing cards with a man, who, when she wins, commits suicide.
This last scene, at a grand opera was originally filmed with Cocteau’s financial supporters for this work, Vicomte de Noailles and his famed wife, Marie-Laure de Noailles, showing the wealthy donors gossiping with one another during the card-game action on the stage. When the supporters finally realized the ending of the film, they refused to participate, and Cocteau found substitutes, including the female-impersonator Barbette, all of which delayed the film for more than a year, and threatened its release, particularly since it was now seen as being religiously blasphemous as well.
Like the Pygmalion story, this work is mixed with a terror of the opposite sex, particularly the overwhelming marble bust come to life which insists the virile male be made to observe his own weaknesses, and results in the deaths of the both the child in the man and the player himself. Cocteau was an open homosexual who had sometimes notorious sexual relationships with numerous Parisian poets and actors, including Raymond Radiguet (the young poet-novelist who died of typhus), Jean Desbordes, Marcel Khill, Panama Al Brown, and his long-time lover Jean Marais, the latter of whom performed in several of his films. Unlike Eliza in My Fair Lady, in this version the marble statue come-to-life is shattered and destroyed, a dangerous figure to be shunned.
Finally, one might today even read this work as a kind of “infection” of the male ego of this obviously virile gay “poet” by the world around him. He is killed twice, once by bullying peers and a second time by an uncaring woman set within the context of a dismissive society. Contemporaries of mine might even read this as a kind of ur-myth that was later played out in the AIDS crisis, also a kind of disease of the blood. Who cares about this frail boy, the man losing the game to a bored woman, art patrons who could care less by their own patronage? Let them all die. We don’t want to hear their “dirty” secrets, their frightening observations of their pasts, even while they might create an art that is so “real” that it can truly come to life. Their mirrors, after all, are dangerous to the secrets that we all keep behind closed doors.