no heroes here
by Douglas Messerli

Whenever I sit down to watch a film by French director Jean-Pierre Melville, I relax. I know, just as I know whenever I see a film by Alfred Hitchcock (although he has occasionally disappointed me) that I will be taken into a strange world which I might never have imagined but will be rewarded with a wonderful tale that can only amaze me in its complexities.
Melville’s specialties generally involve a deep entry into the criminal mind, where we watch the complex intricacies of crime figures—generally those who are planning a deep heist, although sometimes only so that they might turn that into an even greater complicity that might include drugs, betrayal of crime friends, and, often police involvement—in which they often get off scot free. Unlike Hitchcock’s highly moral world which reveal his paranoia about evil in the world, Melville’s films often promote their criminal figures and associates, who are treated in fact as interesting individuals, and sometimes do not get punished. Truth is never so simple in Melville’s world, and everything is made even more complex by the outrageously convoluted plotting of their absurd machinations. 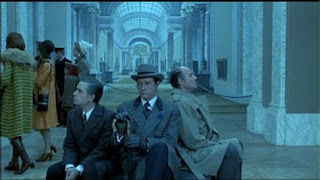 Yes, Tom Cruise in Mission Impossible films leaps off buildings, dives deep into the ocean, commandeers helicopters which he must fly through dangerous mountains; James Bond jumps into action against some of the most impossibly nefarious forces of evil. But Melville’s flat-footed, nonetheless clever and often handsome policemen such as Commissaire Edouard Coleman—in this film Alain Delon, who previously played criminals in other Melville films—have a difficult time in tracking down their obviously plotting nemeses, in this film the American actor Richard Crenna—playing the very clever Simon, who robs a bank not for the money but as a payment to plan his robbery of a stash of cocaine aboard a moving train. Possibly the only match to him in American film is Hitchcock’s sophisticated villain Phillip Vandamm (James Mason) in North by Northwest; but Vandamm, who may have taken down an entire plane to protect his international intrigue, is clearly a morally despicable individual.
Melville’s plotting criminals work much harder for their “supper,” and often get tripped up by the complex situations they have negotiated, such as in this film, when a simple teller is able to retrieve a gun and wound one of the robbers, which forces them, in turn, to do-in their friend. Melville’s films are filled with aging gay men whose young tricks attempt to steal their artwork, and by betraying women, or in this case, a transgender woman who reports directly to Coleman. 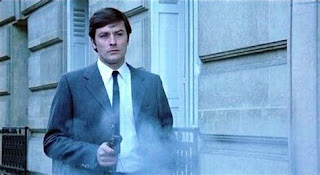 And even the so-called “moral” authorities in this director’s works are often misled and confused. In this case Coleman, the “flic” or cop, is desperately attracted to Simon’s “moll” (as the American film noir works might have described her), Cathy (Catherine Deneuve). She throws him kisses even as she whispers about her involvement with Simon’s criminal activities. And she runs a kind of ur-strip club in which no respectable American cop would dare be seen. In short, the differences between the immoral figures and the supposedly moral upholders of society’s values are very unclear in this and other Melville films.
Although this work, as in nearly all of the French director’s films, does not disappoint in creating a great deal of highly plotted-out criminal undertakings, fun to watch simply because of details they reveal about these clever evil minds; but in this Melville film, the real subject is not the achievement of capturing the money, the drugs, or even the criminals, but is really far more about mortality itself.
The heroes, this time around, are not just fated, but in Un flic are meeting up with their own inevitable deaths. Melville uses the craggy faced Crenna, 46 at the time of this film, precisely to represent the aging process having taken over the actor known to American audiences as a young, handsome child-actor in Our Miss Brooks and as the young Luke McCoy in the popular television series The Real McCoys, At the early age of 46, Crenna clearly looked far past his prime.
More startling was the fact that the always beautiful Delon no longer looked quite so handsome. He major roles were behind him, and here he is a slightly pudgy-faced, if still strikingly beautiful, at age 37, in a period right after the so-called "Marković affair,” when his bodyguard, Stevan Marković, was found dead after being dropped into a rubbish dumper. Delon was a person of interest, since he and others, including Claude Pompidou, the future wife of Georges, the French Prime Minister, had been evidently involved in lavish sex parties, whose members revealed that Delon himself may have been homosexually-inclined.
The relatively young Catherine Deneuve, who had already appeared in her major movies, at just 29 is made-up in this film to look thin, drawn, and stringy-haired, not at all the alluringly beautiful figure she usually played.

These figures, criminal and supposedly defenders of cultural values are all worn out and tired in Melville’s Un flic, characters who work so hard to accomplish their night-bound tasks that they might have been better working in a local factory or as shopkeepers. They have hardly anything to show for their endless plotting and search of the truth. By story’s end, it is apparent that Simon has plotted his own suicide, as he pretends to pull out a gun to kill the “flic,” who shoots him dead. No gun is found, and Cathy is left, empty handed, in the nearby get-away car. Each of them comes away with nothing: no money, no proof, no love.
As always, Melville argues that the criminals work just as hard to do what they want as daily laborers, or even the police to un-do them. Life is never easy for those who question the authority of law, nor for those who attempt to carry it out. No heroes here, despite what cinema often attempted to suggest. And, in that sense, perhaps Melville was a greater moralist than even the more comically oriented and cynical Hitchcock.

Posted by greenintegerblog at 10:07 AM