Kon Ichikawa's 1959 film, based on Japanese fiction writer’s Jun’ichirō Tanizaki’s The Key falls into the cracks of so many genres that it is difficult to know where to begin to describe it. It is, overall, a kind of murder mystery overlaid by a romance, not just a daughter / suitor affair but a mother / daughter’s boyfriend affair, a story of an old man’s delusions and his attempts to stave ff death through his own voyeuristic proclivities, a tract of correct society’s inability to perceive the truth, and story of extreme jealously on many of the characters’ parts. It’s also, unequivocally, the story of a cultured man’s destiny in a society which does not truly appreciate poetry and art.
And then it gets more complex when you include sexual incompetence (an issue seldom discussed in Japanese culture of the day—or in the US during the same period for that fact) and add in a bit of psychological incest. And then, of course, we must face the issue of the good young doctor’s manipulation of the family for his own financial gain, which also links it, tangentially, to Billy Wilder’s Double Indemnity of a decade earlier. And that’s just the beginning.

American critics seem to focus in on the fact that the elderly “hero” of this tale, Kenji Kenmochi (Ganjirō Nakamura) is obsessed (as the Western title shouts) with his lack of sexual prowess. In this pre-Viagra period one might have thought that the movie was simply arguing for this elderly man to get one more hard-on with his quite beautiful wife, Ikuko Kenmochi (Marchiko Kyō). Yet, it is truly represents all aspects of old age that haunt this elderly gent: he can no longer remember telephone numbers, names, etc. In short, it is not only his sexual condition, but his growing dementia that haunts the work. And that fact creates a kind of darkly comic aura to the film, as he increasingly plots his wife’s encounters with the handsome young doctor Kimura (Tatsuya Nakadai). The ambitious young man has long been the boyfriend of Kenji’s plainer daughter, Toshiko (Junko Kano), and has even had a rendezvous with her in Osaka—evidently a popular sexual retreat of the day. But now, with the excuse of the cod roe he brings the family from his home, he enters increasingly the world of the Kenmochis, discovering that the much younger wife to be quite charming, she, in turn, suddenly turning from the highly obedient world in which she has suffered, to be able to laugh and even charm the younger man.
Even darker, Kenji not only encourages the relationship between his wife and the young man but uses it as a way to excite himself sexually, attempting—after their meetings—to be reunited with his supposedly “erring” wife. Throughout most of the film, Ichikawa does not let us know about any sexual picadilloes, of which they are seemingly innocent. But it is through his imagination that the old man now lives, and that discharges a contagion over the entire family, as the daughter and their housekeeper Hana (Tanie Kitabayashi) begin to suspect the worst of Ikuko. They are both convinced that she is now trying to “murder” the old man through sexual excitation, without realizing that it is he himself, suffering from high blood-pressure and numerous other psychological and physical pathologies, who is determined to keep up some kind of sexual contact.
In the closeted world of the Kenmochi household no one seems to perceive that it is Ikuko herself who is in danger, forced to drink alcohol by her husband, after which she falls into real (or, perhaps, we can never know for sure) afflictions, usually ending with her having passed out in a hot bathtub.
It is only when she finally admits to her husband that she has been privately seeing the young doctor—although intensely denying any sexual activity—that her husband is sexually aroused once more, attempting to have sex with his wife but nearly dying of a stroke in the process. Of course, both onlookers, daughter and cook, once more presume the worst of Ikuko, imagining that she has attempted to kill him. 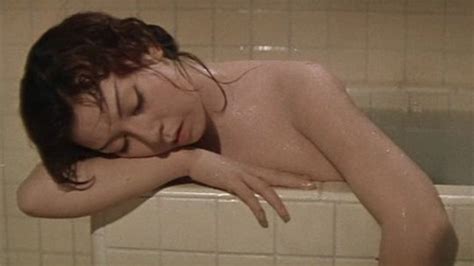 Both the original story and Ichikawa turn this into a truly darker tale when we realize that Ikuko and Kimura have perhaps actually been having a sexual relationship when she offers him the key to the house, telling him when everyone else will be asleep or out. It is the sound of Kimura’s footsteps as he arrives that betrays both nurse and her elderly husband that he has returned to have sex with Ikuko. And when Kenji awakens from his coma, the first thing he attempts to relate are the words “F-O-O-T,” representing the “footsteps” he has heard in the night.
When Kenji finally does die, his wife seems almost joyous, celebrating with a small dinner with Kimura and her daughter, while Kimura, by this time—perceiving the true poverty of the household, who survived primarily on Kenji’s art dealings and poetry involvements (none of them truly representing any wealth)—begins to truly regret his involvement with the family.
The daughter, Toshiko, attempts to poison the couple through a pesticide she injects into the tea. It doesn’t work, since Hana has already transferred that poison to another container, which she pours upon the salad.
All three are killed, but even her admission to the crime is ignored as authorities who presume it is a triple suicide due to the poverty of the family, an irony that can’t be missed. Evidently, the symbols of art and wealth are far more important than the actuality, just as the appearances of adultery are far more important than the possibilities of a real love, or the avarice of a young doctorial striver. This is a world of many overlying levels of sexual and cultural corruption. The key, is precisely that, an indexical revealation all their multifarious actions. The corruptness of the society has permeated itself into the very core of family life: a man who cannot accept his aging, a young woman who cannot accept her lover’s attentions to her mother, a mother who is willing to forget her role in order to seem again attractive and young, and a doctor who attempts—as Kenji himself admits earlier—to use this family for his own advancement.
Despite all of the plot development, an essential aspect of this film, Ichikawa balances the inner turmoil of his characters with the rhythmic patterns of nature, the trees and reeds blowing in the wind, the corrugated rooves of houses, the very stones, covered with leaves, on which Kimura walks to get to his mistress, even the trams (which he shoots from underneath) that take these characters on their journeys. When Kenji falls into his coma, he sees his own wife as a vision of the desert, with layers of endless waves of sand.
Despite the perverse and intense desires of his figures, Ichikawa reveals that patterns are still at the heart of their behaviors. There was perhaps no more docile and obedient wife than Ikuko or a politer and more respectful suitor than Kimura. These are not monsters, but simply sexual beings caught up in the process of living. Kenji simply cannot accept the fact that he will soon be no longer be part of that process, just as Toshiko cannot accept that in her bitterness she has been left behind.

Posted by greenintegerblog at 12:48 PM