a ferber fantasy
by Douglas Messerli

J. Grubb Alexander and Robert Lord (screenplay, based on the fiction by Edna Ferber), William A. Wellman (director) So Big! / 1932

William A. Wellman’s film So Big! from 1932 is based on Edna Ferber’s 1924 melodrama, a work in the manner of other of her such works as Cimarron, Giant, and long before, Show Boat. I recall my high school teacher, the wonderfully intelligent Elizabeth Belden, slightly scolding me for having chosen to write a Junior high school report on one of her books. She was right. Yet I loved them for their epic presentation of the American scene. And yes, they are about as silly and sentimental as you can get—as I perceive today—yet they still ring true with a ridiculous notion of what might have been the American Dream. Popular fiction, as bad as it generally is, can still pull us deeply into the emotional maelstrom of our culture, particularly at a time when we can only feel embarrassed for it.
Yes, it is certainly hard to believe the always amazing Barbara Stanwyck (playing the outrageously named Selina Peake) in her fall from a daughter of the dandy gambler (Robert Warwick), particularly given the vortex she makes from a finishing-school child living in Chicago’s Palmer House (where I stayed many a time on my visits to that city—even today I cannot imagine how my parents, totally middle class, allowed me to stay there on my bus trips to see plays in the windy city; perhaps it was just not as grand in those days, but I loved it!), to a local boarding house and, finally, after her father is murdered in a backroom gambling room, in her role as a school teacher living in the house of the course farmer Klass Poole (Alan Hale, Sr.), who mocks the young teacher’s admiration of his endless rows of cabbages.
And it is even more impossible to imagine that their young son, one of the many in those days who were not allowed to attend school because they were needed to work the farm, in this case the sensitive Roelf (Dick Winslow as the child and George Brent as the adult personae), whom she home-
taught, in this case evidently simply by asking him to read Ivanhoe and The Three Musketeers. Well, if you don’t believe this, you won’t believe I Remember Mama either, wherein the family son is educated by the nightly readings of a rogue to whom they’ve rented a room. These characters are out the US myths of underhanded education, which perhaps really existed. Roelf not only becomes educated but is transformed into an internationally known sculpture. Ayn Rand couldn’t have been prouder.
Yet the likely architect of this story, Dirk De Jong (Hardie Albright, played as a child by Dickie Moore), Selina’s “so big” son, born from her farm worker husband, Pervus De Jong (Earle Foxe), whom, when he dies obviously of his hard labors, she takes over, determining to replace his potatoes and cabbages with asparagus. Could Prairie Hill, Illinois truly have grown asparagus? It is centrally a product of Europe and, in the United States, California, Washington, and Michigan. Well, perhaps it grew in Illinois as well, but I never knew it as a product from that state. And the “Prairie Heights” do not seem a good place for this water-needy plant. 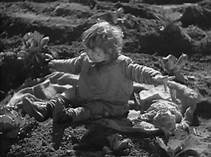 Well, this is Ferber fiction, isn’t it? Heroes come out of the woodwork, and Selina is definitely one, a larger than life figure who saves the farm, her now dissipated son (who despite his name grows increasingly “so small”), working eventually as a successful bond broker, who can no longer disguise his disdain for his hard-working farmer mother, whose hands show their hard work in the soil. We are now in James Agee territory, where the depression workers are lionized and celebrated. Although it’s a difficult stretch to see the sophisticated and smart-talking actress Stanwyck playing this role. Let us forgive it once more, this is just a Ferber fantasy.
Yet, when the spoiled Dirk finally meets the sophisticated artist Dallas O'Mara (played by the equally sophisticated Bette Davis), we must say, maybe this is enough. Fortunately, Dallas is out to teach the young Dirk a lesson. Although it’s apparent that she and Dirk have something sexual between them, it takes her to teach him the facts by inviting in the great artist Roelf, having conveniently just returned to the US, to teach Dirk a lesson, as the former student of his mother travels back to the home farm to pay homage. It’s all loving and very touching, if unbelievable. Dirk has his upbraiding simply in Dallas’ and Roelf’s simple admiration for her.
What becomes of all this is not clear. Will Dirk leave his position as a wealthy bond broker, will he marry the wonderfully open Dallas? We never know. But it’s fun to imagine the outcome, which Wellman allows us to contemplate, without moral complications. In this pre-code film, people were allowed to make mistakes.