Akira Kurosawa | 生きものの記録 (Ikimono no kiroku) (I Live in Fear)

going too far
by Douglas Messerli

In many respects Akira Kurosawa’s Ikimono no kiroku (I Live in Fear) is his most Japanese film, simply because it recounts the horrific fear that most Japanese must have suffered during the Cold War of the 1950s, particularly after being the homeland of the only 2 major atomic bombings on ordinary citizens in history. Every character in this complex work does, indeed, have fears of nuclear annihilation (as did numerous citizens around the world; as a child I was one of them).
Yet foundry owner Kiichi Nakajima (the always wonderful Toshiro Mifune) has, as most of his family perceives, gone a bit to far, first attempting to build a nuclear bunker at considerable expense in the south of Japan, but upon discovering information that if there was another bomb the residue would probably move from the north to the south, becomes determined to move his very large and urban family to a large plantation in Brazil.
Almost from the beginning of the film, as the family has gathered in a domestic court to air their grievances—Nakajima’s wife has flinchingly filed, with the help of her sons and daughters, a petition to that court to declare her husband mentally incompetent—and a local dentist, Dr. Harada (Takashi Shimura) has been asked to join two other judges in hearing their case.
It is clearly a highly contentious one, with family members exciting the hearing room to each utter their anger and pronouncements, while inside sits the resolute and stubborn father, flapping his fan endlessly in torture and anger, convinced that is family— including his immediate children and those he has fathered from an illicit relationship, all of whom we gradually come to perceive as a fictious and ungrateful lot, desperate to keep up their own financial support proffered them from this terrified industrialist.
If at first, we might certainly side with the family members, who perceive their father’s concerns, despite their own private fears, as “going too far” and as do two of the judges, through the careful and deep-thinking Dr. Harada we begin to realize just how deeply embedded are his fears in the society at large. Might not everyone, to a certain degree, silently and less explosively, be suffering the same fears? Even Harada’s son admits to such inclinations, but what can one do, he argues.
"Everybody has to die," Nakajima counters, "but I won't be murdered." 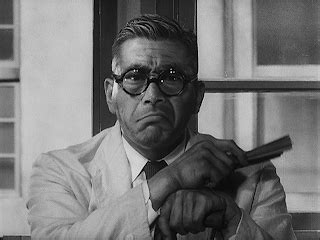 Ultimately Harada feels that if this man is indeed cantankerous, a danger for this contentious and selfish family, he is certainly not mentally insane simply to fear the worst, and, after all, it is his money with which to do what he wants.
The careful and caring Harada, in the end, is done in by the angry and impetuous businessman, who attempts to quickly work around the family and their financial restraints which the court eventually applies, by attempting to buy up property in Brazil and force his family to join him. But, his anger, in the end, does him in, and he is left simply as an old man in a kind of fever, ready to die before his time. Even Harada’s attempts to meet and talk with him have been to no avail. The fear, in which he lives, dominates everything else.
He is not even willing to discuss how this deathly “anxiety,” which poet W. H. Auden described a problem of the decade in his phrase “The Age of Anxiety,” has come about. Had he witnessed or imagined the Hiroshima or Nagasaki attacks? Or had he simply worried so much about his own country’s history that, despite his great financial success—working as, strangely enough, a kind of Hephaestus, a forger of war in the underground—he has become obsessed with nuclear destruction? If his family members are petty and selfish, so too has he himself been in his various affairs and business activities. Are his feelings of absolute terror a result of his own terrorizing of others, his absolute control over his sons and daughters?

In the end, I realized this film was far more Western and international in its subjects than merely representing a post-war Japanese statement of angst. It reminded me more than any other film of Andrei Tarkovsky’s masterful The Sacrifice, a movie wherein another family leader, terrifyingly fearful of nuclear war, is equally committed to saving his family and his society from the inevitable, in this case by burning down the house which he and his contentious family so loved. Nakajima also burns down his own “house,” so to speak, in destroying his factory, leaving not only his family but his loyal employees without any possible means of survival.
Perhaps in the process his has destroyed his own past connections with the capitalism that made nuclear warfare possible, or perhaps, just as in Tarkovsky’s films, it simply represents those acts of a kind of madness, of a man who has “gone too far” in his own thinking to retreat into rationality, the possibility of which composer Fumio Hayasaka (who died shortly after composing the music for this film, and a man who created some of the greatest of movie music through the years) eerily conveys through his combination of jazz music and Theremin.

Posted by greenintegerblog at 11:38 AM