straightening up the quare
by Douglas Messerli

I have wanting to see the film version of Brendan Behan’s first play, The Quare Fellow for many years now, and finally ordered it through my subscription through Netflix.  In part, I wanted to catch a glimpse, at least, of a play by a writer of the 1950s at a time of my extensive theater readings of Ionesco, Pinter, and Albee, whom I had failed to read. I suppose to my young 14-16 year-old mind, a drunken Irishman, no matter how good a writer, was simply not of interest to me. How little did I know!
Accordingly, I was delighted to finally have the opportunity to make amends. Unfortunately, the film version, directed by the grade-B Hollywood German-born director, Arthur Dreifuss, never quite gave me the opportunity to experience Behan’s dark, gallows-humor work.
The first act, which in the play was mostly outside of the prison, was quickly moved within so that prisoners could release their tensions through song and complaint as the new “screw” (prison overseer) arrives. Patrick McGoohan as the well-meaning rustic new prison guard Crimmin is quite excellent in his innocent eagerness to learn and in expressing his in-born sensitivity, despite his seeming ignorance of the brutal world in which he has just entered.
Fortunately, he has Regan (Walker Macken) as a seasoned guide to help him find his way. Although Crimmin believes firmly in the criminal system, Regan, who has served in the prison for many years, has a much more skeptical view of the entire system, particularly since there are now two “quare fellows” (queer men, men outside of the normal prison population) who are about to be executed, and Regan has seen far too man executions in his service.
In the play, Behan uses this first act, removed basically from the inner workings of prison life to help break down Crimmin’s naivete through the dark humor that characterizes much of his writing. By quickly jumping into the prison itself (realistic as it is: it was filmed in the real County Wicklow prison), we lose the objectivity that Crimmin must later come to, and the real horror of a system (much like that still in US prisons today) which still consider it permissible to kill certain prisoners, including one of the “quare fellows,” named as the silver-caned murderer, who, it appears, is actually a “gay” Wildean kind of man (not made evident in this film production), whose actual crime we never discover; one must recall, however, being gay was still a punishable offence in these days. It hardly seems to matter, since his punishment is stayed; yet, despite that fact he soon after he hangs himself, the fact of which perhaps says more than even his terrible punishment.
The other “quare fellow,” whose crime in the original play was also very vaguely presented, in this production we discover, has murdered his brother. And this is where the well-intentioned film really begins to unravel, moving to a kind of social documentation against capital punishment.

In its determined attempt to decry that terrible reality, Dreifuss’s and Jacqueline Sundstrom’s script, widely swinging away from Behan’s far subtler dramatization, introduces the other “quare fellow’s” wife (Sylvia Syms), who resides in the same boarding house as Crimmin, and gradually convinces him that her affair with her husband’s brother is behind the fraternal murder committed by her husband, who refused to mention the affair during proceedings in an attempt to protect her from being described as a “whore” In short, what was a story of male intrigue and governmental suspicion is turned in this director’s vision to a kind of melodrama about heterosexual jealousy and revenge, giving the comic and far darker elements of Behan’s play an almost melodramatic flair, in which she 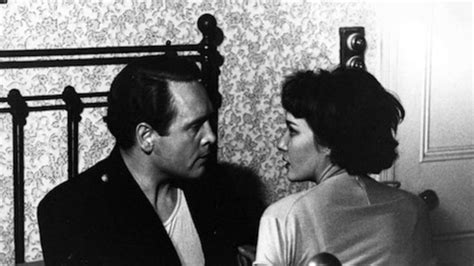 and Crimmin attempt to save the day—without success. The drama of this film is entirely centered upon the events concerning the possibilities of saving her murderous husband, which we already know, given the dismissals and snobbery of the authorities will never happen.
There are some excellent moments in this film: particularly when two seasoned criminals drink down the rubbing alcohol that Crimmins is trying to administer to their knees. And the interchanges between Syms (as Kathleen) and Crimmins almost incriminates him in having a secret boarding-house affair, which, of course, transforms the innocent rube from the West coast into a kind of willing participant in witness tampering.
Generally, the acting, particularly by McGoohan and Macken is credible, and some of the moodily expressionistic cinematic images are quite arresting. But this is clearly not the Irish masterpiece of dark prison humor and suffering that the playwright intended it to be.
Although the movie received, in its day, general acclaim, Dreifuss, after, went back to grade B Hollywood films such as Life Begins at 17 (1958) and Juke Box Rhythm (1959). Too bad that the great Joan Littlewood, the original director (who died in 2002) wasn’t allowed to transfer this film onto screen.

Posted by greenintegerblog at 11:15 AM