I’ve yet to find one film source or guide that has not described the three short plays by Neil Simon written under the name Plaza Suite as comedies. Perhaps it’s just the times or my current age, but this time returning to these pieces I saw the first two, at least, as sad tales of marriage and sex. Despite the fact that Simon, once again, in this work peppers his script with one-line zingers, only the last piece might truly fit the category, to my way of thinking, of comedy, ending happily with the marriage of a young woman terrified of the ceremony in which she must play the bride.
In may be, in part, that despite the loud-mouthed, angry-old-man antics of actor Walter Matthau, he has no ability for nuance; Simon, it is rumored, hated the acting in this film in general, particularly Matthau. Or perhaps it is just that director Arthur Hiller (who died in August 2016), despite the numerous comic films he churned out in his career, is not truly a director with a light touch. But, more importantly, it is the series of events that the first two playlets that seem to me so very sad and reveal, along with the third work, a kind a cynicism of married life that is embedded in nearly all of Simon’s plays, including even early more comic works such as Come Blow Your Horn, Barefoot in the Park, and The Odd Couple.
Although I’ve never been a big fan of Simon’s works, this one, in its somewhat bitter dimensions seems to have more heft than his comic recordings of squabbling couples.
If you’ve never seen this triplet offering, all three pieces take place in the same room, 719 of the Plaza Hotel, a hotel which almost didn’t survive a transformation of its building into a condominium reconstruction—which already in 1971 the seemingly prescient Simon script wondered whether, in its aged elegance, it might be torn down. 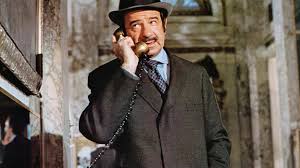 In the first piece, Karen Nash (the always marvelous Maureen Stapleton, who played all 3 women of this work on the Broadway stage) has traveled from her suburban home to the Plaza, planning to meet her husband Sam there to commemorate their 24th anniversary in the very suite in which they celebrated their wedding night. Stapleton, who in the script is supposed to be around 48 or 49 was actually 46 at the time of filming (which is funny given Sam’s comment that when she forgets her age she always rounds it up, not down like other women); yet she looks older and speaks more like she were woman in her late 60s, probably because then, old age was defined as arriving earlier that it currently is in those decades. In any event, she has clearly lost her youth, and carries herself like an older woman, wearing plastic galoshes over her shoes, and walking with a definite death-leaning slump.
Her husband has clearly been missing in action for a long while, spending more and more nights in the city because of his work, and she hopes that this celebratory evening might even ignite new interest in their relationship. There is something wonderfully innocent in her desires, as she chattily explains to bellhops why she is at the hotel and why she is now inhabiting this particular room, as orders up the same meal, hour'dourves (without anchovies; in Simonian logic they eventually appear with anchovies) and a French white wine (which with Simonian logic arrives late).
When Sam finally arrives, he is, presumably as he has been many a night, in a huff, determined to read through a contract between busy calls to his secretary Miss McCormack (Louise Sorel). Obviously, he hasn’t a clue why his wife has trekked into the city to meet him in the city, nor in any mood, even when she explains the occasion, to take joy in her company. They argue about everything from her birthdate, the floor on which they spent their wedding night together—he claims it was the 8th floor—and even the number of nights he has gone missing from his suburban home.
Despite her plucky determination to offer up a beautiful evening to Sam, moreover, it becomes clear that she also has a barbed tongue and, in her pain over the failure of their relationship, is equal to his dismissals of her, mocking Sam’s attempts to think himself thin and his naturally cranky behavior. At moments, they both attempt to stop the endless bickering, but always it begins again almost immediately, as the two clearly have lost touch with any of the love they might once have shared.
When the secretary finally does show up with a set of botched papers, which means, of course, that we will have to return to the office, Karen finally pleads with him to stay and almost jokingly—but obviously with deeper inner fears—claims he might be having an affair with Miss McCormack.
We have only to wait a few dramatic beats to hear him admit the truth, that he is having an affair with her and, despite his attempts, has no will to cut it off. Clearly always ready to play the victim, Karen suggests she is willing to forgive him, but her pleas that he might give their own relationship another try goes unheeded, and he walks out the door, leaving her to imagine the loss of her husband for the rest of her life.
Our final view of her might almost be out of her early film Miss Lonelyhearts, with overnight case in hand, trudging back the next morning to the train that will take her back to her empty house. If this is not tragic—even she excoriates her husband for the banality of his love interest, secretary and boss—certainly Hiller did not intend us to laugh.
The reason I returned to this rather insubstantial film was because of the second playlet which stars Barbara Harris (who died on August 21st of this year; Simon dying five days later), in which another suburban housewife (Muriel Tate) drives into the city to meet up with a former beau, Jesse Kiplinger (again Matthau), who is now a successful Hollywood producer.
Muriel is a sort of less-wealthy housewife who might be right out of Stephen Sondheim’s musical, Company, which appeared only 2 years after the Broadway premiere of the Simon play, where the women who lunch order up another “vodka stinger.” Indeed, despite her best intentions, Muriel is quite delighted by Jesse’s clear attempts to get her into bed; and while endlessly saying, like Groucho Marx, “I must be going,” she is both attracted to the “stingers” and the possibilities of sex. 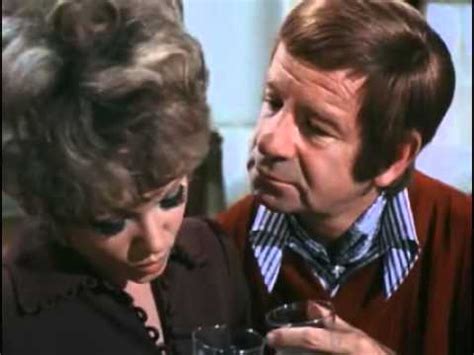 Like nearly all male seducers, once Jesse has lured Muriel back into his room for yet another round of drinks, he clicks the lock of the door shut. But in doing so, Simon, at least in the #MeToo generation, sucks any possible comic oxygen out of his work, leaving us with a kind of bitter Don Giovanni-like rape. If Muriel has another sexual round with Jesse—we never see the final conclusion of his sexual actions, but we presume it—we are certain that it will be quite uneventful for both; even if they did once, as kids, have great sex, they are no longer children and—as our nearly inarticulate President spoke the other night—the “lingering stench” of their now middle-aged bodies won’t be pleasant.
What is pleasant in this short piece is the kind of “ditzy” performance by Harris, who balances her horror of the event with her absolute delight in the fact that, given the unspoken sexual failure of her husband Larry, someone might still find her attractive. She’s ready from the start, despite her assertions, to drink herself into oblivion in order to submit, very gradually, into a salve of temporary pleasure—constantly postponing the time she must be home from 3:00 o’clock, to 4:00, and finally to 7:00 to allow herself the latitude for one last jump back into adolescent romance. She and we know, Muriel will face only utter disappointment, and that the next time Jesse is in town, she will also demur. But for Muriel it is a temporary ointment to the disappointments of her life.
If this slow dance of rape is funny, I must be missing something. It is now among the sad stories we daily hear about women, young and older, being trapped by power, fear, and sublimated desire.
The last piece of this not-so-funny comic opera might well rhyme with the central character of the piece (although never fully seen except for a couple of quick camera flicks), with the strangely waspish name—particularly given the overly stereotypical Jewish portrait of her not-so-loving parents—Mimsey (Jenny Sullivan)—“flimsy.” 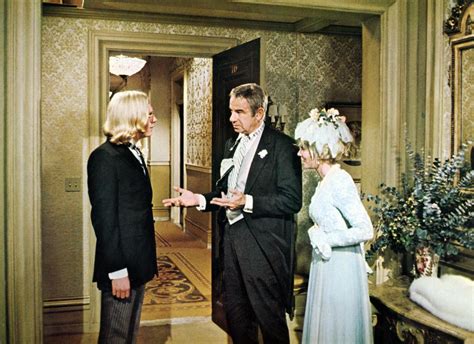 Here, as in both the previous plays, a door suddenly clicks into a lock as the young would-be-bride closes herself into the bathroom of the same hotel suite, perhaps the only way to truly escape that claustrophobic suite with its mean history and her parents, equally hysteric (the male in Matthau’s case is the primary example of that word) and money-oriented life. Roy Hubley, after all, is paying for a highly expensive wedding which his daughter is refusing to attend; and his wife Norma (Lee Grant) is about to lose “face” and be treated with further abuse from her husband.
At the heart of this sillier pieces are numerous pratfalls, torn tuxedos, rained-upon head-wear finery, ridiculous treks across the outer ledges of the famed hotel, along with entries into other people’s bedrooms and endless calls from the panicked parents of the groom who must face the growing impatience of the wedding-goers.
So weak is this playlet, that all it takes is the rather chubby, long-haired groom Borden Eisler (Thomas Carey) to stand outside the locked-away Rapunzel and shout, “Mimsey, cool it,” and out she comes, ready to ride away on his motor-bike. Well, this, finally, is comedy, as empty as it can get, like an after-thought of the deeply disturbing betrayals we have previously witnessed. I suppose I might even have laughed—except that I am afraid that Mimsey can’t “cool it,” given her horrific childhood, for long. Someday, far too soon, she will trek back into the city to see the empty shell of her dreams.

Posted by greenintegerblog at 9:35 AM