Maybe it’s just because as I get older epic-like complex plots seem basically uninteresting to me; but I think even the director of Nashville, Robert Altman didn’t quite know what the plot of his film was. With a cast of hundreds, its twists and turns in story don’t truly matter; what does matter are the various ways in which his characters seek either love (save for a few, nearly everyone in this work jumps in and out of numerous beds) or success (in music or politics). Very few of these silly folks from the city of Nashville find either, or if they have performed at the famed Grand Ole Opry, don’t appear to be very happy about what they have attained.
Indeed, singer Haven Hamilton (Henry Gibson) would rather be in politics, while the popular singer Barbara Jean (Ronee Blakley) has just suffered a burn accident—apparently related to what her husband Barnett (Allen Garfield) later describes as “nervous breakdown.” The trio of Bill (Allan F. Nicholls), Mary (Cristina Raines), and Tom (Keith Carradine) (a satirical take on Peter, Paul, and Mary) are so confused in their love for one another that it might be better if they all fell into bed into a good-fashioned threesome.
White gospel singer who performs with all black choruses (another of Altman’s hilarious satirical jabs) Linnea Reese (a wonderful Lily Tomlin) would clearly rather be at home with her two deaf children (as if one were not enough) giving them her love, but since her husband Delbert (Ned 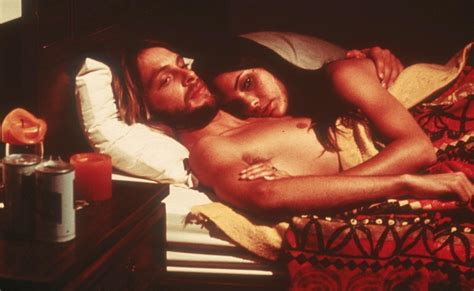 Beatty) is busy running Hal Philip Walker’s campaign in Tennessee and is lawyer for Hamilton, she finds herself instead in bed with Tom, who, the moment she rises from love-making, is on the phone to find another woman for the night. Singer Lady Pearl (Barbara Baxley), dedicated to the dead Kennedys, is mostly drunk throughout.

Naïve Sueleen Gay (Gwen Welles), like a country version of Florence Foster Jenkins, hasn’t a clue that she can’t sing, and is forced to strip so that she might get the opportunity to perform with Haven Hamilton and Barbara Jean at a political fund-raiser at Nashville’s The Parthenon, which her airport cook friend, Wade Cooley (Robert DoQui) warns her against with his honest assessment that
she can’t carry a tune. Celebrity seeking teenager Martha, now LA Joan (Shelley Duvall) just wants to get close to any of these famous folks and probably into their beds as well, although she is supposed to be seeing her dying aunt. And only God knows what BBC correspondent Opal (Geraldine Chaplin) is doing in this film, randomly interviewing some of the figures and wandering in and out of junk yards and school bus-lots.
Nor do we have a clue why low-three-wheel bike rider (Jeff Goldblum) is tooling around town, or why the nice-looking, mother-loving Viet Nam veteran, Pfc. Glenn Kelly (Scott Glenn) has come to Nashville, supposedly in admiration of his dead mother’s appreciation of Barbara Jean. Or why Elliott Gould, Julie Christie, and Howard K. Smith show up to play themselves. While we see all these figures and numerous others, we never even get a glimpse of the would-be president, running on the Replacement Party ticket—in an eerie prescience of the Tea Party and its later manifestations.

But perhaps we have since spotted him and the disasters he threated (although Altman and writer Joan Tewkesbury’s candidate seems far more liberally or, at least, Libertarian- oriented than our current “outsider” President).
If anything, this Altman masterwork shows us just how crazy we USA citizens are as a people for whom desire plays the major roles in our lives. And the film, in the end, in its vast expression of those facts cooks up, finally, to be a kind insanely messy stew. But also there is a kind a sanity, which appears in several scenes throughout the film through its gentle and reassuring music, much of it by cast-members themselves—Keith Carradine’s “I’m Easy” and “Honey; Ronee Blakley’s “Bluebird,” “Tapedeck in His Tractor (The Cowboy Song),” “My Idaho Home,” “Down to the River,” “One I Love You,” and “Dues”;  Henry Gibson’s (with Richard Baskin) “Keep A-Goin'” and “200 Years”: Karen Black’s (yes, she too stars in this movie) “Memphis” “I Don’t Know If I Found It in You,” and “Rolling Stone”; and Lily Tomlin’s lyrics for Richard Baskin’s music to “Yes, I Do.” Apparently, Altman required all of his major actors to compose as well as sing. Has there ever been a musical motion picture that has asked so much of its actors? Or, perhaps, looked at differently, that has given them so much opportunity for expression?
We know that when you have opened the pulsing heart of USA values, it will inevitably end in some kind of violence. Here, music itself turns against its performers, as loner Kenny Frasier (David Hayward) opens his violin case to take out a gun and shoot down Haven Hamilton and Barbara Jean. We can’t even quite imagine his motive in the shooting, just as it is so difficult to imagine hundreds of shootings throughout the USA each year.

But, finally, Altman pulls off a miracle by transforming the tragic-stricken audience as miraculously being given the opportunity, as Hamilton passes off the microphone to the shy, wannabe musician Winifred who has changed her name to Albuquerque (the always amazing Barbara Harris), who slowly settles in, Streisand style, to Keith Carradine’s “It Don’t Worry Me.” The song might almost be seen as a statement of so many poor American’s slavery to the system; but she slowly transforms some of the saddest lyrics of US existence, “Tax relief may never come,” “The economy may be depressed,” “You may say that I ain’t free,” etc, each stanza followed by “It don’t worry me.”  “Life may be a one-way street,” “But it don’t worry me.” Somehow Harris turns this kind of “Trumpland” song into a kind of anthem of survival, a choral statement that whips up the shocked audience into a kind of delusional sense of possibilities simply by tuning out of the problems of their life
In retrospect, Altman’s satiric ending and Carradine’s nihilistic lyrics become almost a mirror to the pit of American horror, while at the same time restating the resilience of the American poor and middle class. It’s a painful if slightly ending to this bitter presentation of the greed and the endless chase of its characters for something that will never make them happy. Sex, success, celebrity and the implied money that goes along with this has not satisfied a single figure in what is not really a comedy, but a sad vortex into the American heart of evil.

Posted by greenintegerblog at 10:45 AM