You might describe The Beaches of Agnès as a sort of love poem celebrating, a bit like Whitman, the self. And also a bit like Whitman, French film director, Agnès Varda celebrates that self not through a catalogue of her achievements nor a telling of her life adventures—although she does visually take us to several of her childhood and adult homes and locations of family outings—but through the multitudes of daily workers, actors, directors, and lovers she has known; and in this sense, Varda’s cinematic autobiography is similar to what I have striven for in the many My Year volumes written since 2000 (I publish these “semi-autobiographical cultural histories” annually).

One might argue, in fact, that although she is viewing this work through the lens of her own life, it is more a poetic documentary about her life “gleaned” through (one should recall that one of her most interesting films was about “gleaners,” those people who sort through what the rest of the population leaves behind, searching for anything that might be of value) than it is a autobiography. She begins, in fact, on a beach of her childhood with a crew placing both frames and mirrors horizontally and laid out upon the sand at various angles, signifying the method of her filmmaking, suggesting that she will both reflect upon and look through framed contexts in order to get to the heart of the 80 years this “little old lady, pleasantly plump” has experienced and achieved. 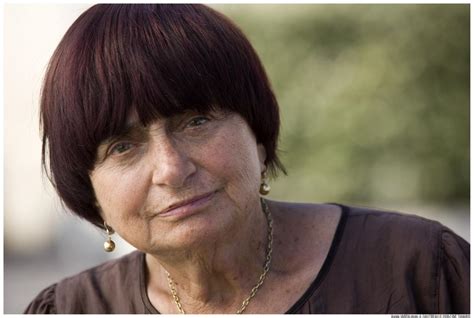 Without Varda having to thump her chest, she randomly shows us photographs (she began, we might forget, as a photographer), objects, recreated and vintage scenes from her films, and, of course, the faces of people: not only the numerous celebrities to whom she was close—her husband was another famed director, Jacques Demy, with whom she regularly entertained nearly every significant film personage in the world—but of fishermen, butchers, perfume and button sellers, and the members of her own parents and siblings (her father was of Greek origin), the last strung out in a series of photographs on one of her beaches.
Varda visits extras in her early films, lovingly allowing them, in the case of two fisherman, to see their performances for the very first time. She, herself, has photographed many of those she loved and admired. And when she doesn’t have a photograph, she creates her acquaintances and the laborers she loved with bits and pieces of their lives, a kind of bricolage of memorabilia that brings those who are now gone from life.
As Roger Ebert pointed out in his 2008 review of the film, five years before his death from cancer, throughout this film, Varda is seen walking backward, as if receding from view in recognition of her own inevitable demise. Yet, given her constant sense of wonderment, exploration, and humor, we recognize that she, even if always a bit plump, has not truly become “little old lady.” Rather, she’s a kind of mischievous force, poking around in the debris of her own past for new ways of seeing and perceiving what it all meant. As she alertly declares "I am alive, and I remember." I have never seen “a little old lady,” moreover, sailing alone a small boat down the Seine.

Much of Varda’s life is connected with the sea. She thinks of nearly every male as a potential Ulysses, a kind of wanderer. And throughout her childhood, living near various bodies of water, she learned not only how to sail, but to weave nets and tie knots—real-life talents that might almost be seen as metaphors for how she later conceives her cinematic works and her life. She and husband Demy bought an entire back-alley of several small, derelict shops, gradually redoing them into a series of two story “rooms,” in which they lived separately and apart from each other and their gifted children, Rosalie and Mathieu. One might argue that even at home, Varda and Demy lived less within themselves than in a kind of small community where they might call out for one another through open windows.
What you won’t discover in this loving film are gossipy tidbits of family life. Varda had already made a film before this, Jacquot, about her beloved husband as he was dying of AIDS (Demy was also a kind of “wanderer,” often engaging in gay sex). For Varda, it seems clear, the inner eccentricities of life do not matter as much as the way life engages people and things in space and in spontaneous acts. And, in many respects, it is that viewpoint that links her films with the French New Wave. Although she may not have “hung out” with Jean-Paul Sartre or Simone de Beauvoir, hers is, nonetheless, a kind of existentialist art, demonstrating what people do rather than merely what they claim to think. Varda never studied film and was no theorist; she worked by instinct through her personal values, and these could take her in many directions within different or, sometimes, within the same work, which is what excites us about her vision. Even memories, she insists, move in many contradictory directions, flying “about me like confused flies.”

Posted by greenintegerblog at 9:20 AM