Aki Kaurismäki | Mies vailla menneisyyttä (The Man Without a Past)

the kindness of strangers
by Douglas Messerli

It’s a wide generalization, but I’d argue that most comedies these days are not all that naturally funny. Their humor derives, often, from a kind of maniacal series of events which reveal the absurdity of life along with the bad-boy and bad-girl behaviors of their characters.
Finnish director Aki Kaurismäki (who often writes, directs, and produces his own films), although entirely contemporary in his stories, seems more like a director out of another era, a bit like Pierre Etaix, Buster Keaton, Jacques Tatti, and even Gregory La Cava’s My Man Godfrey, whose films feature sad clowns, men and women who do not even perceive their lives as somewhat tragic but who simply suffer the “slings and arrows” which they almost expect to daily survive. It is only the viewer who perceives their suffering as beyond the normal, which reduces their lives to something that is painfully laughable from our presumably happier perspectives. And like those great comedic directors, Kaurismäki’s heroes are made more loveable by their unknowing recognition that they might be contemporary Jonahs.
Indeed, you might almost say that the hero of the now-fifth film I’ve seen of this director, The Man Without a Past, might be truly said to have been swallowed up in the wail (if not whale) of uncaring contemporary society. M (Markku Peltola), perhaps a reference to his identity as “man” but surely not without the overtones of Fritz Lang’s child murderer, has arrived in a city (evidently Helsinki) with only one bag. He clearly is at the end of existence, with nowhere to go and utterly exhausted: he falls to sleep immediately upon arrival on a park bench.
Lest you think that the highly touted Scandinavian-Finnish society is filled only with wealth and kindness, Kaurismäki immediately introduces us to three local thugs (Clark Coolidge and I were threatened by just such figures on our one night in Helsinki, and I encountered other versions of Finnish brutes in Estonia as well), who immediately beat the sleeping visitor, rob him of any money he has in his billfold and steal most of the useable contents of his baggage before again beating him with a bat into near-death amnesia. 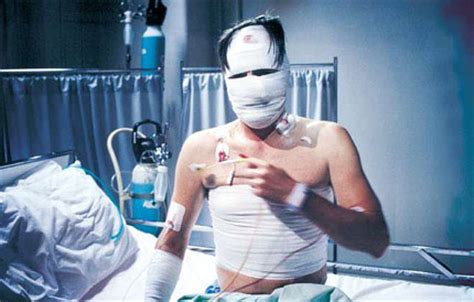 M wakes up in a hospital, having been already pronounced brain-dead by the doctor, and inexplicably detaches himself from his life-saving tubes, staggering away, collapsing at the edge of a small body of water where, nearby, poor Helsinkians have been forced to seek residences in cargo containers.
Two young brothers find him and carefully bring him “home,” where, despite their own destitution their gentle father and caring mother shares their simple means of gruel, onions, and rice with the stranger, forcing the food into his mouth, cleaning his bandages, and gradually restoring him to “health.”
Like these outsiders, the sad-sack visitor, now must face a society that demands identification and history in order to even help with aid and public support. A man with no memory has no place in this well-run near-socialist society.
Yet M, finding a kind of “landlord” willing to rent him a nearby container in which to live—although threatening him with a brutal dog attack if he doesn’t pay up—he calmly cleans, turning this squalid space into what almost appears a true home.
Finding a job is almost impossible, but the good services of the Salvation Army, which provides these poor folks with regular meals, and the kindness of the hard-faced Irma (Kaurismäki regular Kati Outinen) eventually leads to a job and, gradually to love, at the heart of every film of this director.
There is a kind of understated respect for each other in Kaurismäki’s films that his suffering characters award to one another that provides his films with their dignity and uplifting view of human life. The Man without a Past, in is simple representation of what it truly means to be dependent on “the kindness of strangers,” is so powerful that it frees us to find joy and laughter in M and Irma’s lives (she survives the demanding sacrifices of her daily job only by listening each evening to a heavy dose of rock’n roll), which is up-ended by a seemingly more destructive discovery of actually who, the now lost and found again, M actually is, as his wife contacts him after seeing his picture in a newspaper.
Fortunately, the wife has now found a new lover, and can only remind our forgetful hero that he lost all of his long-playing records on gambling debts. Her current lover is ready to defend his territory, but the always gentle giant, who incidentally has taken in the supposedly mean watchdog as a pet, is happy to give his old life up. After all, he now has his “doll” (as in the Broadway musical Guys and Dolls), the Salvation Army worker who, we know, will happily redeem herself and her new lover’s life.
In Kaurismäki’s pictures, nothing happens with great drama. The possibility of escaping the harsh worlds which the characters face, is so gradually revealed that neither they or we actually see it coming. It just naturally—an important word in this director’s films—comes to be through the humanity of all the work’s figures, both good and bad.
What this Finnish director’s films seem to make clear is that no matter how impossible the world seems to be—with soldiers chasing after you, machines and automobiles working against you, love constantly alluding you, the money you once had having completely disappeared—life is still redeemable; the human spirit is always capable of making something amazing come to be. It’s a comic possibility that we all pray for, dream of, imagine for ourselves. Perhaps Tennessee Williams’ Blanche DuBois, in her desperate need to be love, was on to something: sometimes, even in the brutal context of a devastatingly bad life, you can, in fact, depend upon the kindness of strangers. Certainly, I have, as has every single character in Kaurismäki’s caring oeuvre.