the outsider
by Douglas Messerli

All the time I was watching French director François Ozon’s 2016 film Frantz, I kept feeling that I had seen this film before; and, indeed, I had, evidently in a forgotten viewing of Ernst Lubitsch’s Broken Lullaby of 1932. I still cannot recall when and where I saw the Lubitsch movie, but I do remember the power of its narrative: a former French World War I soldier who has killed a German soldier, who he realizes from a letter of the dead man’s body, was a pacifist, who had not even loaded his gun. The guilt of the murder leads him to follow the address back to Germany.
Ozon’s version is a much subtler and more intelligent version of the earlier film, bringing in many other elements which the original contained, based on the French play by Maurice Rostand and its 1931 English-language adaptation, The Man I Killed by Reginald Berkeley. Not only does this version present a truly sensitive portrayal of the leads of two still-opposing cultures, Anna (Paula Beer) and Adrien (Pierre Niney), but more clearly than Lubitsch’s version, suggests that—after Anna spots Adrien delivering flowers to her finance’s grave—that perhaps the two men, both aesthetes, had had a homosexual relationship. Certainly, his description of their sharing of music and art in Paris (both are violinists) was a deeply sensitive event, that strongly effected their lives.

The German family upon which he intrudes himself, the Hoffmeisters (Ernst Stötzner and  Marie Gruber), who themselves are obviously of the upper middle-class, have brought up their son in an atmosphere of cultural involvement. It is, ultimately, their own cultural enthusiasm which allows them to let the French soldier—an outsider to most Germans, and in Lubitsch’s version someone to which the entire community negatively reacts—into their household. I think it’s more than a little interesting that in Ozon’s film, they quite quickly embrace the Frenchman, while in the German director Lubitsch’s earlier rendition their embrace is a far more laborious event. Nonetheless, the Hoffmeisters like the Holderlins before them, do emphatically allow Adrien into their inner circle, and permit and even encourage their son’s would-be wife to fall in love with him. The world of “them” and “us” easily fades away, as they perceive in the young friend of their son another image of him, which he carefully projects, and perhaps falsely upon their suffering memories, a bit like the film Six Degrees of Separation. 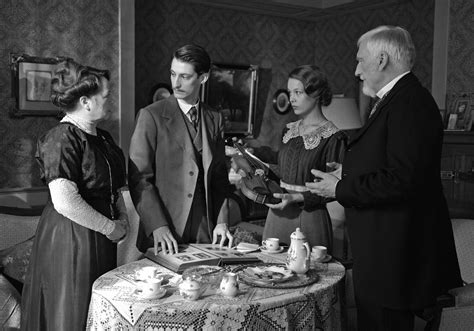 In this sense, this work, in all of its forms, is actually a study of ingress, the entrance of one culture upon another, which, given our current American government’s stand against immigration, speaks more strongly today than it may have in Lubitsch’s day—even if the same issues were clearly there as well in 1932, when Hitler had begun to make such issues visible.
The fact that what Adrien is really seeking is simply forgiveness does not make him more lovable. He has murdered their son, and when he admits the truth to Anna he betrays her own belief in a possible reconciliation with her past. Yet his simple attempt to anneal the past draws Anna to him, even when she inwardly knows she must push away.

When, after he returns to Paris, and she attempts to reconcile her feelings for the “outsider,” she finally determines to not only forgive him but seek out what has seemed to be the relationship he has proffered her, she discovers, to her horror, that he is not at all the loving companion whom she might have sought; that, instead, he is a kind of “mamma’s” boy, who to please his domineering mother (Cyrielle Clair) he is now determined to marry his childhood friend, Fanny (Alice de Lencquesaing), an ever-patient and actually quite lovely woman who attempts even to embrace the woman who she recognizes as her sexual opponent. Yet, it quickly becomes clear that Fanny will win simply because Adrien is so very weak. His guilt is only a small part of the story: he is a man who cannot even face his own past actions.
The last few scenes of this wonderful film, which moves subtly between stark black-and-white and light color, are revealed by the “false news” she sends in her letters back to the hopeful Hoffmeister family, who have now psychologically adopted the French “murderer” as their own son, wherein she tells them of her nonexistent relationship with Adrien, attending concerts and art museums together. She does, indeed, attend these events, but now completely without him, even though the film ends with their joint viewing of Manet’s painting Suicide, which may, alas, signify one or the other’s end. In Orzon’s film, it is clear, any such action will not be that of the now independent and strong-minded Anna, but that of her weak would-be lover.
Both the men in her lives, it is now apparent, have left her empty-handed, the one by not even defending himself, and the other by refusing to embrace her open love.

Posted by greenintegerblog at 11:07 AM