Anyone who has seen a film by Jean-Pierre Melville knows that the director is fascinated with crime and the societal outsider. Several of his films not only attend to the plans for robberies and heists but focus on the often brutal elements of such events. In the hands of a lesser gifted director one would perhaps not be able to feel any empathy for these outsider villains, their lovers and families. Yet in Melville’s works, if we do not exactly root for the murderers and thieves, we are nonetheless fascinated by their mindsets and the dangers they undergo.

The film begins with Gustave “Gu” Minda (Lino Ventura) making a daring prison escape with two others. The youngest and most handsome of the trio easily jumps from a tower across empty space to wall, to which he attaches a rope. The second follows allowing the first to, presumably, make his way down on the other side. Finally, it is Gu’s turn, but seeing already how dangerous it was even for these younger, thinner men, we truly wonder whether Gu is up to the leap, and it appears he too has second thoughts. He almost does fall, but is pulled up by his friend to safety, and both scramble down the rope, at the bottom of which they discover the first man dead, evidently having fallen on his way down or during the arrival of the second. Suddenly, we perceive this elder, the “hero” of our story, has, in fact, gotten his second breath, with the opportunity of now creating a new life.
But we soon discover just how impossible that will be, again expressed visually when Gu, following his cohort, can just barely leap on the slowly moving train that will carry the two survivors away.
Clearly Gu has been a quite successful thief, since his sister in Paris, Manouche (Christine Fabréga), who runs a rather expensive small restaurant, lives in a rather luxurious mansion. And it is clear, since she maintains a body guard, Alban (Michel Constantin), that she too has been involved in the so-called family “business.”
Melville does not use dialogue to tell us any of these things. In fact, there is not word spoken for the first several scenes of the film. But in his attention to detail we are told a story far richer that any dialogue might have revealed. We are not even surprised when Manouche later confirms our suspicions that she is also a kind of thief, and is ready to run off with her brother, with whom, —again without language—we recognize, that she has an incestuous-like relationship. The first real sentence of this film is a date and time, evidently when a bar-keeper in Marseilles, Jo Ricci (Marcel Bozzuffi) is planning his own heist. Ricci, we soon discover (again without verbal confirmation) must have been crossed by Gu, since his henchman and two goons soon show up to Manouche’s restaurant, killing her manager and lover, Jacques. Alban, who also works as the bartender, quickly pulls out a gun and shoots down the henchman, with the other two soon after showing up at Manouche’s house, evidently attempting to force her to pay a great deal of money for her survival. Gu, who has come there to seek asylum, saves the day; taking both the goons for a country drive in which he shoots them to death, his signature method of killing.
Nearly everyone in this “underworld” is almost mute, even Ricci dancers, long cigarette holders in their mouths sing nothing, although you can almost hear them counting out their routine maneuvers under their breaths.
It is only the police, in particular Commissaire Blot (Paul Meurisse), who speak in full paragraphs. Arriving at the scene of the murder Blot questions Manouche, Alban, and the other workers (the patrons having all run off), and when they refuse to speak ends up giving each them sarcastic alibis. It’s clear he knows these criminals far too well.
The plot, which is always complex in Melville films, hardly needs repeating; we know from the start in the film that it will involve a three-way showdown between Gu, Blot, and Ricci; and that there will be the inevitable heist, in this case to tide over Gu and his sister upon their escape to another country. 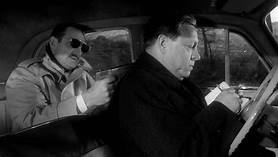 We hardly need the heavy-handed summaries of the various policemen to piece together the intricacies of story. The director simply counts down the hours through intertitles with the month and day, as we move from the late October of the first scenes through the end of the year and into January, when Gu, now involved somewhat inexplicably with Ricci’s brother, plans to rob a truck filled with platinum bars.
Ultimately, of course, the police do hunt down the two leaders, Gu and Paul Ricci, physically torturing and manipulating Gu into a vague admission.
In a kind of “third” breath, Gu escapes from a hospital to capture the Marseilles inspector and his assistant, forcing them to write out a letter of expunction before doing away with them in his usual manner.
By the time Commissaire Blot has arrived from Paris, there has been a final shootout between the robbers and their associate, Orloff, resulting in all their deaths. Discovering the letter confessing that Gu had no hand in their betrayals, the world-weary police head simply tosses it at the feet of a nearby journalist, as if it might stand as another kind of silent testament to the murderous criminal.
Words, in short, are nearly meaningless in this world. And that is the problem. When these men think, they do not speak, do not attempt reason out their ideas through language, but simply act, immediately and impulsively, sometimes simply circling in their actions as when Gu, prepared to make a hit on Gucci’s place, tells Alban to circle three times before he finally determines that something is not right.
Death, accordingly is always a step ahead or behind them since they have no concept of talking themselves out of inevitability. If the cliché of death being the “silent stalker” makes any sense, one might argue that in Melville’s film these men are the silent stalkers of death. And in their mute dance with death there is a strange kind of nobility.
We are asked not to judge the actions of either the criminals of this film nor those who mete out the justice. This is, as Melville makes clear, simply a fiction. Yet, I would argue, in his deep attention to details, it is a fiction to which we can only give credence.