the prodigal son
by Douglas Messerli

Somewhat in the tradition of Rebel without a Cause (a large movie poster of James Dean, in fact, shows up in the room of one of the movie’s central figures), and with relationships to Truffaut’s 1950s five Antoine Doinel films, Taiwanese film director Ming-liang Tsai’s Teenage Nézhā (shown in this country as Rebels of a Neon God) shifts the focus from the California and Paris streets to the neon-lit Taipei of 1992, it’s original release date; the film was not released into the US until 23 years later. 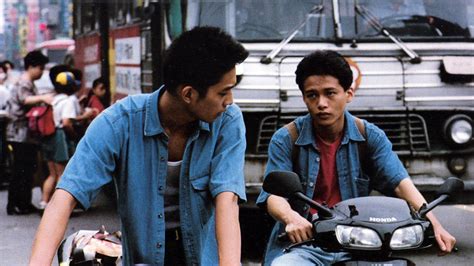 In Chinese culture, Nézhā is a kind of child-god born into a human family and who attempts to kill his father. The young Nézhā figure in this work, Hsiao Kang (Lee Kang-sheng), is evidently a not-so-bright student, who with his taxi-cab driving father’s and spiritual-impelled mother’s support (she truly believes her son is an incarnation of Nézhā) has been enrolled in an overcrowded school to cram for college-entry tests. Clearly his parents are determined that he will be able to achieve in a manner which was impossible for them. Yet the tortuously old-school teaching methods of the buxiban (cram school) are painful even to watch, let alone to actually have been suffered by a young man or woman in their daily sessions.
In one scene, as the children leave their crowded classrooms, we see that a young girl’s scooter has been meaninglessly towed while our “hero,” lower in the screen, discovers that his scooter has suffered the same fate. He can only get home through the arrival of his taxi-driving father, who briefly, sympathizing with his son, suggests they attend an afternoon movie—the first shared experience proffered evidently in decades.

Given the difficulties of city living in Taipei, everything soon changes, as two young “hoodlums,” Ah Tze (Chen Chao-jung) and Ah Ping (Jen Chang-bin)—petty thieves who steal the change from phone booths and abscond with the motherboards of many of the arcade games they nightly patrol—purposely break the side-mirror of the taxicab. The young boy is asked to return to his classes as the father angrily drives off.
Hsiao Kang opts out of his cram-class, asking for the money which his parents paid back, and moving into the world of the two small-time hucksters, presumably to track them down. Yet as we quickly perceive—although little of it has been spoken about in the reviews of this work—his stalking of these figures not only represents a desire for their desolate, but somewhat exciting life-styles, but signifies a kind of homoerotic fascination about them.
The central figure’s major focus is Ah Tze, who lives in an apartment that is nearly always under water, a slosh of debris and decay which he evidently shares with his elder brother. The wonder is that his brother can somehow still attract a young working girl, Ah Kuei (Wang Yu-wen), who eventually attaches herself to the younger sibling.
Ah Tze’s real emotional commitment, however, is focused on his friend, Ah Ping; and, although he eventually, and very much after the fact, does finally have sex with this clearly sexually available woman, he abandons her time after time, and finally, when Ah Ping is beaten for one of their petty robberies, offers her up to him for “hugs.”

Throughout—although nothing ever visually occurs or is even spoken about it—this film represents a ménage à trois between its three major male figures, two of them not even knowing about the existence of the third. The passion that embraces them is not so much a gay sexual desire as it is a dissatisfaction with their lives and, simply put, “the way things are.”
This entry into the dark neon-lit world of Taiwan’s major city never quite allows the sexual release that any of these trapped young men are really seeking. Instead of a love story it ends as a kind of strange revenge comedy, with Hsiao Kang spray-painting and glunking-up the engine of his idol’s scooter with glue. Symbolically, he strips his beloved enemy of his sexual power, the film ending, in fact, with Ah Tze giving up his woman companion to his own friend. Surely, he can now never win her back, so, in a sense, the invisible young stalker has turned his obviously heterosexual object of fantasy into a kind sexually neutered being, a boy in whom he might find some sexual release. And, in another respect, he has finally redeemed his father’s promise to take him to the movies by making his own “midnight movie” in real time and space in which, finally, things turn out “right,” or at least possible on his own terms.
If previously, his own father has locked him out of their home, one of the final images is of the father (or mother) carefully opening the door a crack which might allow their wild, disobedient son to return.
Los Angeles, October 17, 2018