how to react to hate
by Douglas Messerli

Paul Greengrass (screenplay, based upon the book One of Us by Åsne Seierstad, and director) 22 July / 2018 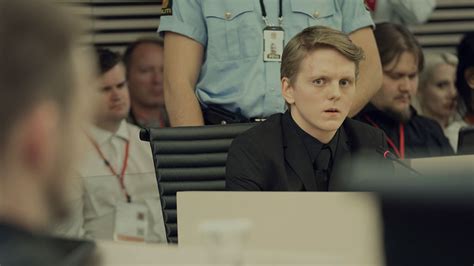 In this film, it is Viljar, endlessly working to rehabilitate his heavily-damaged body, who becomes the center of focus. The only drama of the last half of this film concerns whether or not he might return himself to the healthy society with which he began the film and if he will be able, physically and psychological, to testify against the man who hoped to end that.
As Kenny observes: “Greengrass doesn’t go for any big triumphalist moments; he doesn’t make Viljar’s courtroom speech a masterpiece of eloquence. This is a movie about difficulty and necessity.” And, obviously the very society that produced such a monster is regrettably undergoing a kind of trial. Can it survive such hate which exists with the reality of Breivik being one of them?
Every society on the planet, clearly, contains such haters and terrible murderers among them, but the truth of the values of each society are made most clear in their response and solutions to such deep hatred. Open vengeance, simple reaction, resistance to the reality of events, or sane social response makes the difference between these societies in terms of their survival. I might suggest that the US could learn a very great deal from the tortured but expedient Norwegian response.
Oddly enough Breivik was correct. When such terrible acts are committed, dozens of citizens meaningless destroyed, ignored, or simply given no way out of such horrible destruction, it is also the society that is under trial. Greengrass makes it clear that some countries and its citizens simply handle it better than others.
If 22 July is not a great film, it is, nonetheless, a quietly profound one.

Posted by greenintegerblog at 10:33 AM