a letter which can wither, a learning which can suffer and an outage which is simultaneous is principal
by Douglas Messerli

If there was ever a film that proves Gertrude Stein’s adage that we are what we repeat, it has to be Chantal Akerman’s 3 ½ hour movie, Jeanne Dielman, 23 quai du Commerce, 1080 Bruxelles of 1975. Yet I hate even to describe this immersive entry into the beautiful widow’s life, Jeanne (Delphine Seyrig), living with her teenage son, Sylvain (Jan Decorte), and their daily routines. By the time you have carefully observed Akerman’s patterned images, you feel less like you’ve watched the art film (now almost a cult classic) Criterion presents it as, than you have gotten an opportunity to get to know a fascinating woman whose life has become defined by her attempts of daily survival. 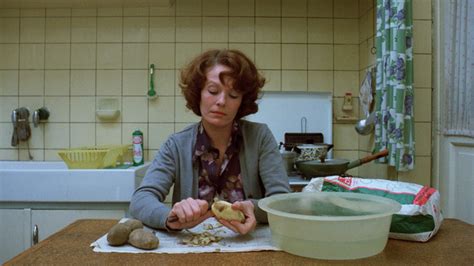 She lives, as the title tells us, in a well-kept, if not deluxe, apartment at 23 quai du Commerce in Brussels, Belgium, where her patterns of behavior center around cooking meals for her herself and her son, bringing in small sums of money so that she might survive through prostitution with boring and unattractive businessmen (3 of whom we encounter in this three-act drama). But she is less a “whore” than simply a working woman trying to support herself and allow her studious son enough spending money that he can continue to finish his education—a problem, evidently, since he has been seduced by a close male friend (and yes, there is a fleeting suggestion that their relationship might have been more than mere friendship) to attend a Flemish school; now, in a French gymnasium or college (we can never quite determine is age, since he speaks little), he is having a difficult time in repeating the poems of Baudelaire in proper French. His mother night attempts to correct the locution of her student son.
We might almost quote from Stein’s Tender Buttons in describing Jeanne’s cooking habits and her relationship with her nearly grown child: the first day she cooks potatoes, creating also a kind of thin vichyssoise and lamb (or mutton).

A letter which can wither, a learning which can suffer and an outrage which is simultaneous is principal.
Student, students are merciful and recognized they chew something.
Hate rests that is sold and sparse and all in shape and largely very largely. Interleaved and successive and a sample of smell all this makes certainly a shade.
Light curls very light curls have no more curliness that soup. This is not a subject
Change a single stream of denting and change it hurriedly, what it does express, it expresses nausea. Like a very strange likeness and pink, like that and not more like that than the same resemblance and not more like that than no middle space in cutting.

These, the first lines of this rather long prose poem of “A meal of mutton,” might almost be seen as a model for Jeanne’s life. I don’t want to make to much of this, but I can’t imagine that Akerman, a feminist and lesbian, would not have read it.
Indeed, one of Jeanne’s most repeated actions is turning off and on lights, as she leaves the screen, returns to finish cooking, and moves on to other rooms, to set the table, place the dishes upon them, and remove them after her son and their quiet dinner together. No one says much; she reports only that she has received a letter from a relative inviting them to Canada. It is certain they will never travel there.

At other times the director simply shows Jeanne in long-camera takes as she bathes, after the loveless sex she has had with her customers. We watch her carefully as she makes up the bed, folds the towel she has used to cover the space between her body and the coverlet. Everything, on the first day, is done with nearly expert control. They only true joy seems to receive is that reading of Baudelaire and a late-night outing into the city’s neon-lights for a few more provisions. 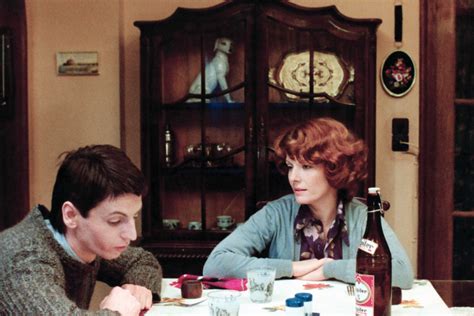 The second day, we again watch Jeanne precisely put potatoes in a pot before exits to do some shopping. Her only pleasure appears to be a cup of latte at a local bar. Her patron of that day pays her and leaves her again to finish the evening meal. But this time things appear to be, just a little, “falling apart.” She must apologize to her son for the potatoes being overdone, but we’ve also observed that the shell of efficiency is slowly beginning to crack: she has dropped a spoon, left a canister uncovered.
And, on the third day, Jeanne seems not quite to be her self-sufficient being, talking, for the first time with strangers and gossiping, just a little, with her grocer. Her previous imperviousness in which she has lived seems to be slightly cracking at the edges. The lights go on and off, she light’s the burner as she does again and again to prepare for dinner, she combs her hair as usual, and prepares for her afternoon client—even if she is a little late.
She reminds me, a bit, of Glenda Jackson perfectly preparing her breakfast in John Schlesinger’s Sunday Bloody Sunday, a scene in which the directly turned his microphone up so that each movement of a knife, a fork, a plate, seemed to demonstrate her absolute efficiency.
Yet, observing Jeanne in sex with her third client, we recognize that something is different. Subtlety, Akerman helps us to perceive that, for the first time in many years, Jeanne actually achieves an orgasm with this not very loveable man. And soon after the sex ends, she carefully takes out a knife and slits his throat. Her orderly life has clearly been destroyed, her ability to do everything on her own has now shown her the lie of her life.
Once again, I was reminded by Stein, recalling Jeanne and her son, in their cramped living room (the room in which they also pulled out his bed from a small couch), setting up their evening table:

A table means does it not my dear it means a whole steadiness. It is like that a change.
A table means more than a glass even a looking glass is tall. A table means necessary
places and a revision a revision of a little thing it means it does mean that there has been a stand, a stand where it did shake.

Certainly, Jeanne’s table, in every sense of those words, has been shaken. Her routine has been disturbed; emotional interchange has suddenly crept into the looking-glass and made her realize just how empty her life has been. She can no longer sustain her son, Sylvain; he must now make it on his own.
As you might perceive, this film profoundly affected me. After seeing it, I will now have to rethink all films that speed through their stories with a leery eye. Sometimes getting to know your character is what human interaction is all about. We might almost say that the more we come to know Jeanne Dielman, living at 23 quai du Commerce, 1080 Bruxelles, with its dreadful curlicues of wall-paper and the oppressive entry-way mosaics, the more she comes alive; yet as a figure of fiction, she has no choice, perhaps, in that process of the film itself, but to destroy her own being.
Unlike in Woody Allen’s The Purple Rose of Cairo, where the central character leaps off the screen to join, temporarily, the real world, I desired to leap into Akerman’s screen just to put my hand on Jeanne’s shoulder to reassure her that emotions were just fine, that love was not something she need deny herself, as she clearly had done throughout her life. It’s a silly conceit, of course, a fag trying to reassure a lovely woman who very much knew what she was all about; but when a movie can create such an empathy between audience and character, well, that’s a kind of miracle.

Posted by greenintegerblog at 11:07 AM