pretty images do not a movie make
by Douglas Messerli 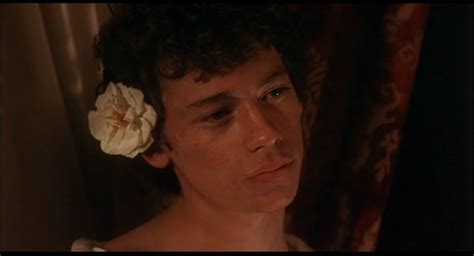 Although in the past I have enjoyed a couple of Derek Jarman’s overheated homoerotic films, particularly his Sebastiane of 1976,  his movie of 10 years later, Caravaggio—although containing some fairly lovely images—appears to have no logical point of view except to, apparently, celebrate the Renaissance painter’s life for its open expression of homosexuality and bisexuality, classifying the handsome artist as a kind of wild aesthete in the manner of Shakespeare’s wild nemesis, Christopher Marlowe.
Yet Marlowe, who like Caravaggio was killed (in the Italian artist’s case, evidently of poisoning), in revenge for his bad behavior, was highly educated, while in Jarman’s version, the Italian artist, although immensely talented, was little more than a street ruffian.
All the better for Jarman’s purposes, since between friezes of the prostitutes and street figures who Caravaggio used for painted figures, he can let the handsome young Caravaggio (Dexter Fletcher) and chiseled but decaying older Caravaggio (Nigel Terry), tended to by the mute Jerusaleme (Emile Nicolaou/Jonathan Hyde)—who the artist evidently purchased, with pederastic intentions from Jerusaleme’s Grandmother (Zohra Sehgal) early in the film—play out their own somewhat orgiastic adventures without much meaning. 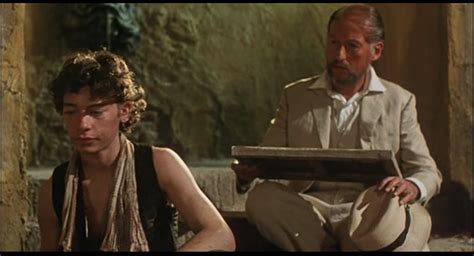 This film seems to be simply a kind of endless, narrated often in a voiceover of the younger Caravaggio, recounting his sexual adventures, interspersed with very badly conceived recreations of Caravaggio’s beautiful art.
Just to remind us how “contemporary” the late-Renaissance bad boy really was, the director interposes numerous anachronisms throughout the film: courtiers madly typing up messages, Caravaggio standing aside a green truck, a motorbike speeding by, and a bar laced with electric lights. Perhaps Jarman thought his campy-like references might save his pointlessly wavering plot, but, I’m afraid, it points up the fact that he has very little to say about the artist and his art itself. He might as well have chosen any other wild-living figure of the past. If Sebastiane, as a sensuously sexual explorative Christian, was presented as being torn between the licentious and the pure, Caravaggio, at least in this depiction, simply jumps into the mud.
Observing a ruddy-faced street-boxer, Ranuccio (Sean Bean), he demands his sexual attentions, which the man, given enough money, is willing to entertain; but with him, fortunately, comes Ranuccio’s girlfriend, Lena (in the amazing Tilda Swinton’s first film role), and in order to get the red-faced streetboy into his bed, it appears that Caravaggio must enter into a meage a` trois. As a threesome they work well together, but when Ranuccio and Lena are observed making love to the artist separately, jealously, as the cliché goes, “rears its ugly head.” 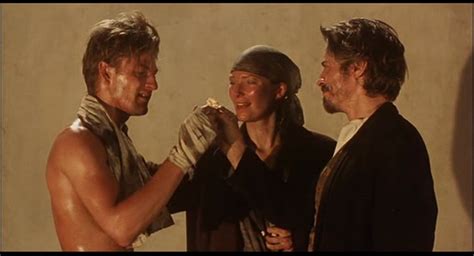 Much of this film is, in fact, filled with clichés or, at least, with sentences that are destined to become clichés through just such a film. As Washington Post film critic Paul Attanasio wrote in his 1986 review:

What's most puzzling is Jarman's view of Caravaggio himself. Throughout, the
artist talks in voice-over, a jumble bizarrely composed of overheated poesy,
homoerotic dreams and the kind of "insights" that might inspire a sophomore at
Bennington to scribble in the paperback margin, "|" or even "|||" Thus: "Man's
character is his fate"; "The gods have become diseases"; "All art is
against lived experience"; "I am trapped, pure spirit in matter ..."

I have no idea what Attanasio had against Bennington University women, but the script might remind us of thousands of such well-intentioned university-student perceptions throughout the world. I probably wrote some myself.
Of course, tragedy lies just behind the tapestries. Lena, who is now pregnant does not implicate either of her lovers and now intends to become mistress to the wealthy Scipione Borghese (Robbie Coltrante). Murder seems to be the result of her determination, as Caravaggio and Jerusaleme clean Lena’s nude murdered body in order to capture it in a painting.
Arrested for Lena’s murder, Ranuccio claims innocence, Caravaggio appearing to believe him and arranging through his Vatican connections to release him.
But when Ranuccio admits the murder to the artist, Caravaggio slits his throat, while we return to the murderer’s own bed, where he has visions of attempting to deny priests from offering him the last rites. 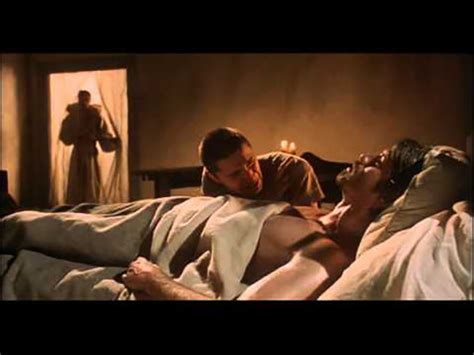 Okay, this wild young genius lived large and mostly uncontrollably, a kind of Warhol of many centuries past, which is what I supposed attracted Jarman to his subject. Yet, you want to ask, so what? Was murder the poisoning the AIDS of other centuries? Did he deserve what he got? Was he somehow simply misunderstood by a society that was, in fact, far more open to various sexual deviances than our own? It’s hard to know what to make of the film Caravaggio because I don’t believe the writers had a clue about what they were trying to say.
Pretty images do not a movie make.
Los Angeles, Thanksgiving Day, 2018
Reprinted from World Cinema Review (November 2018).