the survivor
by Douglas Messerli

Taijun Takeda (screenplay, based on the novel by Tsutomu Tamura), Nagisa Oshima (director) 白昼の通り魔 Hakuchū no tōrima (Violence at Noon) / 1966
Known for films with highly sexualized content, Nagisa Oshima, in his 1966 film Violence at Noon, focuses more traditionally on attitudes about sex. That is not say that the film does not often contain emotionally repellent attitudes about sex: the central character, Eisuke Oyamada (Kei Sato), after all, is a serial rapist and in the very first sequence of the film becomes a brutal murderer.
The two central female characters, moreover—Shino Shinozaki (Saeda Kawaguchi) and Matsuko Koura (Akiko Koyama)—hide the identity of the man who now twice raped Shino and killed the woman for whom she works as a maid, and in Matsuko’s case, Eisuke’s schoolteacher- wife whom he has basically abandoned.
Finally, this film also features an attempted double suicide by lovers Shino and village leader, the young Genji Hyuga (Rokko Toura). Genji succeeds in hanging himself, while Shino is cut down by Eisuke and raped for the first time. 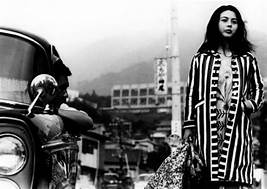 Yet, in this case Oshima makes no attempt to hide the “violence” signified by the American title. The first many frames of this film (there are a total of over 2,000 cuts in the entire movie) represent a combination of jarring shifts of camera position and the juxtaposition of vertical and horizontal patterns that hint of the rapists’ ultimate ending, eventually with the help of his conflicted lovers, internment in prison and a sentence of death. This violent criminal, we later discover, actually accosted 35 women, killing several of them.
Even after we leave the urban landscape of the first scenes, the fields, with their rows and rows of plantings create an unforgettable horizontal line that seems to imprison the four friends, having grown up together—the strong peasant Shino, the highly educated and seemingly perceptive Matsuko, and the popular but psychologically distressed Genji—all having suffered dire circumstances as children, when floods and other events destroyed their parent’s livelihoods. Oshima almost seems to suggest that their destructive childhoods have created the passions with which, as adults, they cannot now deal.
Of their group, Eisuke was always the outsider, the one who stole without guilt, and survived while the others suffered. He is a taker, while the others were givers, often to their own detriment. If they survived by offering their talents to their impoverished community, he steals their produce, their animals, their love. It is the sad story we all know about a kind of inverse survival of the fittest—the fittest, in this case, being the outsider, not at all fit to survive in this tightly enclosed community; but, as such, he is also, strangely, the prodigal son, beloved by all for his very inability to remain within the bounds that they have so carefully, and often painfully, embraced.
Of all the figures, Matsuko is the most controversial. Having just watched a day or two earlier Sara Conlangelo’s film The Kindergarten Teacher, I realized just how similar the two teachers were: both were remarkably calm and loving in the classroom yet were so dissatisfied with their lives that outside their ordered classrooms they were desperately passionate beings who had no ability to choose the right husbands and families. Trapped between their intellects and their passions, they had no way to properly travel through everyday life. In the more recent film, the character sought out the genius of her young student; in Oshima’s film, the teacher chooses the most outré being of her own childhood group, Eisuke, both women destroying the good they have intended and created within their communities.
Genji, the charmed leader of his community, is too frail to lead it, and determines to destroy himself at the very moment he is elected their leader.

It is only the solid, hard-working peasant Shino who might survive. Late in this violent-laden film, after both women have both helped to turn over the true menace of their lives over to the police, they together realize how they had helped Eisuke—even indirectly—to commit his terrible acts, with a deep sense of guilt—what they describe as a “link” to him—realizing that their lives have also come to an end. The always proud and graceful Mutsuko gathers her students together, and naming them one by one, personally says goodbye, a beautiful scene that combines here personal teaching skills with her graceful recognition of who she and everyone around her is.
On the train ride back to their homes, the stolid Shino is only hungry, eagerly consuming not only her own meal, but, when Matsuko rejects her dinner, the food of her friend. Yet, like Genji, Matsuko convinces the still innocent Shino to commit another “double suicide,” as the two, returning to their home village, and tying their feet together, poison themselves underneath the same trees from which Genji had hung himself.
It is a both tragic and comic ending to Oshima’s film, as the high-minded, moral “Ma’m” (as Shino keeps calling Matsuko in the English-language version) dies, while, miraculously, once again Shino survives, vomiting out what she has ingested, after which she attempts, unsuccessfully, to save her friend.
The patient intellect, the political leader, the impulsive lover have all destroyed themselves, while the stolid peasant farmer-girl and maid has survived. In Oshima’s vision, truly the “meek inherit the earth.”

Posted by greenintegerblog at 2:01 PM