the male gaze
by Douglas Messerli

It’s rather strange to think that Roman Polanski’s second feature film, Repulsion, is in some ways a pre-feminist work—particularly given the many claims of the director’s abuse of women over the years. One might even describe this 1965 as an early testament to the current #METOO movement.
The central figure of this film, Carole Ledoux (Catherine Deneuve), who works as a manicurist, lives with her sister in a somewhat upscale, if dowdily furbished Battersea (London) apartment, even while they apparently have a difficult time paying their monthly rent. Born in Belgium, the sisters
could not be more different. Hélène, a slightly frowsy woman which might have been found in the works of the British “angry young man” playwrights, gets her part of the rent mostly by turning tricks with her lover Michael (a lecherous Ian Hendry), whom she attempt to by fixing a rabbit dinner early in the film, a meal interrupted by Michael’s determination to eat out before returning back to her apartment for night of a noisy sex, which deeply disturbs Carole’s attempts to sleep.
The beautiful Carole, on the other hand, is dreamy and detached, clearly afraid of any male companionship, but almost equally terrified of making close contact with her women colleagues. Given Polanski’s example of the clientele of Madame Denise’s salon—Mrs. Rendelsham (Monica Merlin) who begins the film as a kind of mummy-like doyenne receiving a facial while Carole works upon her nails, and the daily pains of male companionship recounted by her salon assistant—we can well comprehend her fears. And, later, we recognize through a brief inter-clip that she may have been raped by her father or another older man. 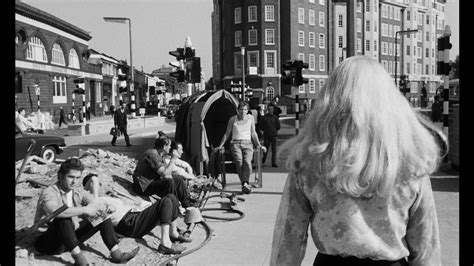 Carole’s beauty, however, draws men to her, including street workers who give her a nod and hoot and a far more respectable and gentle suitor, Colin (John Fraser), who attempts to get her to go out on date, without much success. Colin, however, is befriended by bar-buddies who talk about women as trophies, and when he has no success with the off-putting blonde, is egged-on to make a more direct attack.
Most of the men in this film, moreover, are far more like the partying sex-fiend Michael than the kinder and handsome Colin, and we immediately perceive why, particularly given her background, Carole wants no contact. Yet we also perceive that the shy and distant beauty is attracted to Colin and even to the far more bestial Michael, at one point retrieving his underwear and putting them to her face, while also being disgusted by the fact that he has stashed his razor and toothbrush in her bathroom water glass.
All those who encounter her, however, do know that there is something wrong with this woman, Michael even suggesting, in passing, that she needs to seek help. And it doesn’t improve the situation that the sisters’ apartment faces a kind of Catholic cloister, whose nuns are constantly called back to prayer with a bell. The overbearing images of this film set a background to the young beauty’s gradual breakdown. 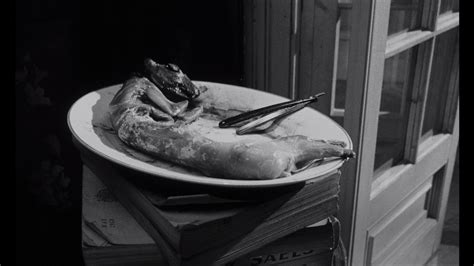 Throughout the film, moreover, Carole hardly ever eats. She can hardly bring herself to taste her fish and chips when she meets Colin, and her evening dinner, that unforgettable rabbit which keeps appearing throughout the film and winds up even in her pursue, is never cooked. Throughout the film, she seems to be unable to consume anything except coffee, and even that seems to be a kind Hitchcockian terror in the manner of the milk that Cary Grant fetches up for his wife, played by Joan Fontaine in Suspicion. Everything gets worse when her sister retreats to Italy with her pay-for lover for what was to have been an overnight visit but extends into several days. She wants to see, quite symbolically, the “leaning tower of Pisa,” as if she personally identifies with its gravitational pull to the lower earth.
If nothing else, the nearly starved Carole goes into a kind of hungry trance—hungry for all those things she dares not touch: food, male companionship, and female friendship. Given those terms, is it any wonder that her world literally “cracks up,” sidewalk splinters turning into earthquake-like fissures in the walls, further terrifying the already terrified woman who simply wants to be left alone instead of being, as Colin attempts after being goaded on by his bar-room friends, a sexual object for his pleasure. In our heroine’s mental breakdown, male hands reach out for her even through the walls. There is no escape here from the male gaze—or in Polanski’s version, the “male grab,” something he surely must have known about.

When Colin dares to break down her barriers, literally played out in surrealist imagery when he breaks down the apartment door, she responds in the only way that a strong Hitchcockian woman can, as in the master’s Dial M for Murder, Carole replacing that character’s scissors with a candlestick with which she clubs her would-be suitor to death.
When the landlord (Patrick Wymark), soon after, comes calling for the rent, she politely hands over the envelope which her sister has left her to pay him. But when he attempts to also embrace her, Michael’s misplaced razor is an easy solution to his would-be abuse.
It is true, Carole is now insane, or, as the males use inappropriately describe her behavior, has become hysterical, and in the process, loses herself entirely as surely as Blanche DuBois has lost her sanity in Tennessee Williams’ A Streetcar Named Desire; but she has, perhaps, in that very fact, regained her integrity as a woman, freed herself finally from constant devouring of the males in the world in which she lives.

That a true rapist could actually write and direct this work shows me a deep comprehension of his own guilt, of his understanding of just how terribly he later abused his female prey. Like Hitchcock, Polanski knew what he was doing in his unwanted pressing upon the female body, which Williams could only imagine and concoct. And that realization is part of what makes Deneuve’s “repulsion” so very tangible and believable, despite the film’s surrealist-like presentation of reality.
Repulsion is a great film because it realizes the everyday horror women of having to escape the gauntlet of the male hunters of society. Unfortunately, in that process, even decent males suffer the for their raunchy brothers. In the end of Polanski’s moral tale—and it is a moral despite his most immoral personal actions—does not truly reveal which of the characters should be the subject of the “repulsion” which he announces, the frustrated and frightened murderer or the preying males who demanded her response. There is no answer here without complete sexual equality and liberation.


Posted by greenintegerblog at 10:19 AM