the champion
by Douglas Messerli

Director Bryan Singer’s and, ultimately, Dexter Fletcher’s biopic of the amazing British musical group Queen, might have been—and accordingly to many, still is—a kind of cinematic disaster. The major figures in the cast kept shifting, from Sacha Baron Cohen to Ben Whishaw, and finally Rami Malek playing Freddie Mercury, with major shifts of screenwriters from 2010 to the final release in 2018, along with numerous changes in the supporting figures in the cast. It’s almost amazing, looking back, that Bohemian Rhapsody, as the film was eventually titled, got made, let alone that it was a financial hit, loved by thousands of its audience members. 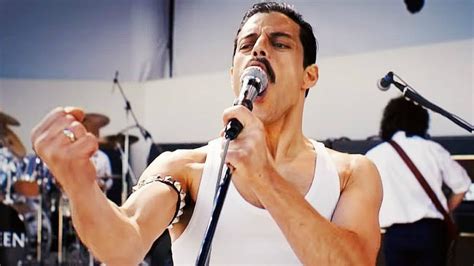 Many of the critics simply hated it, The New York Times reviewer A. O. Scott summarizing, early on in his review:

A baroque blend of gibberish, mysticism and melodrama, the indiefilm seems engineered to be as unmemorable as possible, with the exception of the prosthetic teeth worn by the lead actor, Rami Malek, who plays Freddie Mercury, Queen’s lead singer. Those choppers may give you nightmares. And some of you who venture into the theater will surely be inspired to exclaim “Mama mia, let me go!”

The usually reliable Justin Chang, of the Los Angeles Times attacked the film along the lines of numerous other critics, who dismissed its theatrical inaccuracies:

…There is something woefully reductive, even pernicious, about the narrative shorthand used to elide Freddie’s sexual relationships with men: a glimpse of leather here, a truck-stop montage there. There’s also something oddly moralistic, even punitive, about the way Freddie’s increasingly debauched, hard-partying ways drive a wedge between himself and his bandmates; it’s not that Brian, Roger and John aren’t allowed to react with cross-armed disgust, but that the movie too often seems to share their attitude. Even more irritating is a wholly inaccurate later scene in which Freddie tells his bandmates in 1985 that he has AIDS, a fabricated detail that feels like an attempt to tidy up the obligatory reconciliation narrative. 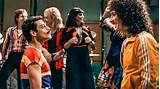 Howard and I, who grew to adulthood in this period, had not ever known of Queen. Sure we heard of the group, but, as Howard reports, we presumed that they took over the seemingly “gay” moniker to simply mock it, that perhaps they were just a grunge group, rock-a-billy singers (we did know, obviously, the clap along songs “We Will Rock You” and “We Are the Champions”; you’d have to have been dead to never have heard these), knowing nothing of Mercury’s history, let alone of the crazy, psychedelic operatic song “Bohemian Rhapsody,” with the high counter-tenor reaches of “Galileo.” Had we known, we might have loved it!
Perhaps our very ignorance, and our lack of knowledge about Mercury’s actual history freed us from all the pre-judgments that the critics could not resist.
Yes, Bohemian Rhapsody often plays with many of the tropes that musical biopics are based on; the unloved hero finding his own way to reveal his talent and moving toward a love you know that he can’t ever sustain. In this case, obviously, Mercury’s apparent love for a young woman, Mary Austin (Lucy Boynton) can never be consumated, which she herself quickly perceives knowing he is not only not bisexual but “desperately” gay, and in this case that is the proper word. Freddie may not have even perceived it himself, but he was destined to seek out an underworld of truly transgressive gay life that would end up with his death of AIDS in 1991.
True, as well, this film spends far too much time with his infatuation with Austin, his determination, despite their inevitable break-up, to keep her in his life, winking with lights off-and-on between the neighboring mansions he was able to purchase after his amazing musical success. But you’d have to be an idiot not to realize that Freddie has long before been slipping in and out of backroom bathrooms to be fucked or to fuck others. If the movie is perhaps a bit too discrete, it doesn’t exactly hide his dark sexuality, and when he finally settles into life with his perverse second manager, Paul Prenter (Allen Leech), we are in on the radical sexual orgies in which he must have participated—even if the film doesn’t want to draw our attention to them. Only the blind need claim that this movie doesn’t focus on Mercury’s “darker” world. This is definitely not the Cole Porter of Cary Grant’s sanitized film biography. 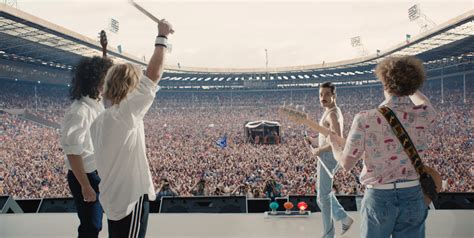 In fact, Malek, with his implanted incisors, gives us a view of a highly, highly sexualized being at fight with the world in which he inhabits, even among his mostly heterosexual band-members, who married, but nonetheless, allowed themselves to collectively portray the kind of faux gay sexuality in their guitar playing, Brian May (played by Gwilym Lee), bass guitar, John Deacon (Joseph Mozzello), and drummer, Roger Taylor (Ben Hardy) roles. They knew who their lead singer was, and encouraged his open sexuality, despite the times, while keeping their personal distances. This is not simply the story of Freddie Mercury, but of the lives of the strange family named Queen. I kept being reminded of Sister Sledge's "We Are Family." So why should the movie haunt the alleys of Freddie’s sexual indecencies—I’ve been there, and I can tell you it’s kind of boring.
And perhaps the most touching moment of the film is when Freddie visits a clinic where he finds that he is HIV-positive. As he is about to exit the building, a handsome young boy, showing signs of the effects of AIDS on his fact, calls out Queen's who shout to his audiences; in performance it is a whoop of joy which whips up his crowds in participatory singing; but in this scene, is a cry-out of death, a kind of sign of recognition of a fellow now walking-dead.
Of far more interest is their inter-relationships, even if the film also fictionalizes them. So, now we know, the group never actually broke up, that Freddie didn’t reveal, just prior to the remarkable Live Aid concert that he had AIDS. Well that’s dramatic license which actually makes sense. Even if he truthfully told them about his illness much later, and wasn’t suffering deeply during the concert itself, and didn’t meet his new “friend,” Jim Hutton (Aaron McCusker) as a one-night waiter, but as a nightly hairdresser, who cares? It’s all good drama, and the tea-party with his estranged Farsi family is right out of a fantasy like that of Lewis Carroll’s Alice in Wonderland (his Red Queen-like father demanding the family turn on the television to watch his son’s performance) even if it is something that only the seasoned writer Peter Morgan (who has written about a real queen), who helped write this story, might have imagined.
What’s more, all critics agreed, Rami Malek did the best imitation of Freddie Mercury that might be possible, singing some of those songs himself, while lip-synching others, while dancing in a way that Mercury surely would have approved of. And the music, the heart of this film, is not to be ignored. I cried, wishing I had encountered Queen in my youth instead of my old age. Today I watched the entire YouTube feature of Freddie Mercury’s Live Aid concert performance, and literally cried again and again. Well, when a movie can make you do that, how bad can it have been?
When Malek picks up the extended microphone, employing it as did Freddie as a kind of extended cock that spelled out to his audience what a true rooster he was, you can’t help but love him (and Mercury). He was a showman, even in his Presley-like performance, that you simply can’t forget. Bowie, the Beatles, Mick Jagger, John Elton, so many others, are there in his performances that you simply can’t ignore Mercury. He was the champion.