a lost hat, a crushed doll
by Douglas Messerli

Yasujirō Ozu’s silent frolic of a film, Walk Cheerfully, comes early in his career, long before his figures mostly retired to more-traditional tatami mat-bound characters; yet in this lovely work he already is very much concerned with changing family values.
The difference, however, between the more traditionally bred, yet office-working Yasue (Hiroko Kawasaki), a beauty which her scotch drinking, game-playing boss would love to get onto his office couch, and the man who falls in love with her, the gangster, Kenji the Knife (the handsome Minoru Takada), is more like the relationship between Polly Peachum and Mackie Messer in G. W. Pabst’s version of Bertolt Brecht’s and Kurt Weill’s The Threepenny Opera than any of the more carefully framed confrontations of the sexes in Ozu’s later films.

Even here, nonetheless, Ozu does contextualize his American-styled societal outcasts as far more fun-loving and charming figures than anything out of the tough-guy noirs of the Hollywood screen. Here, working together, Kenji and his sidekick Senko (Hisao Yoshitani) commit a crime—Senko stealing a wallet while Kenji comes to the victim’s rescue only to help Senko pass on the object on to him—it is more like a scene out of the 1940s American musical Guys and Dolls than anything you might experience in The Public Enemy (1931). In fact, these “gangsters” often tap dance, enjoy themselves at the local bar, and, in their off time, take in boxing at a local club. Of course, Cagney (the “public enemy”) was also a great dancer and could tap up a storm. But he might never have imagined doing that simultaneously in his gangster movies. Ozu distances Kenji from the contagion of his world by making him somewhat of a dandy who charms his victims to death rather than shooting them down in the streets.

The director lets the minor figures, particularly after Kenji determines to go straight in order to win his beauty’s hand, play out any evil that might exist. Kenji tries his best, taking Yasue on a car trip into the country with her young sister at their side, but the results are more out of Harold Lloyd than Douglas Fairbanks, Jr. He keeps losing his hat and accidentally squashes the young sister’s doll under the car’s never-ending tires in his macaronic movements into space. In this Ozu film, there is no going back, even if his entire “gang” intend to impede his desired transformations.

And that is the fun of this comedy. As Kenji removes his dagger-like tattoos and takes on a job as a window-washer that might be almost a foretelling of another musical hero, chronicalling J. Pierpont Finch’s rise to the top in the 1960s Broadway musical How to Succeed in Business without Really Trying, Kenji becomes almost erased from the film, while his former moll, the evil Chieko (Satoko Date), with hair styled like Clara Bow’s, takes on her sexual competitor, attempting to replace herself as their mutual bosses’ favorite, and working to get Yasue fired. As the critic of the perceptive “Silent London” blog writes:
…the real business of Walk Cheerfully is transacted between Yasue
and Chieko. Yasue, like it or not, has to change – just as painfully
as her boyfriend does when he scratches away his ink – and take
Chieko’s place instead.

It is almost the same lesson that Guys and Dolls’ Sister Sarah Brown needs to learn from Adelaide, you have to “marry the man today and change his ways tomorrow.”
Although in Ozu’s speed-driven work everyone, it seems, is busy changing themselves, transforming a previously feudal society into a totally westernized world that puzzles and terrifies the elders and often frightens even those determined to undergo that change, their very energy astounds us all.
As the “Silent London” essayist argues:

Walk Cheerfully’s jittery tempo is measured by more of these cutaways
to feet, dancing, pacing and tapping. There’s something suspicious about
all that perpetual motion: just like Senko when he’s being frisked at the
quayside, Chieko and her boss jiggle their guilty feet while they scheme in
the office lift. And the pace of Walk Cheerfully is relentless: these inserts,
the speeding cars and the travelling camera. The question is: where is all
this forward momentum taking us? 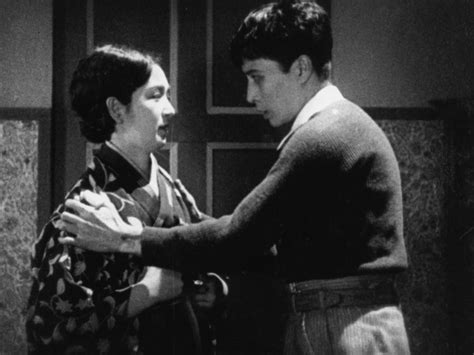 I wouldn’t exactly describe this forward motion as “suspicious,” but simply as inevitable. This society is in a not-so-slow collapse that must quickly be filled in with the transformations of its youth. Many of these changes, as we know from the history of Japanese cinema and literature, will ultimately be extremely painful, disorienting, and, if nothing else, challenging for both younger and older generations for decades to come. One might even argue that the backlash for this sudden lurch forward came in the Japanese fascism of World War II. If we see it from this perspective, in fact, we can easily parallel it with the radical shifts in German culture of the Weimar Republic during the same period—or even the not so pleasant transformation from Obama’s enlightened politics to the Trumpian “kill-them-all” political chaos of today.
Ozu, always the conciliator, seems to warn both sides, at least in the English title of Hogaraka ni ayume, suggesting the society “walk” rather than as do his characters, run and dance into the future, and that their elders be “cheerful” rather than begrudging or even grow hateful about those changes. By film’s end, Yasue’s mother remains in place over her teapot, but seems to smile in approval of her daughter’s acceptance of the former gangster. And even with her doll crushed, Yasue’s sister seems ever so pleased with what the future has brought her, a new brother-in-law who appears determined to help move her move out of her sheltered present.