the happy saint
by Douglas Messerli

Without creating a precise allegory or even pushing her film into complete fantasy, Italian filmmaker Alice Rohrwacher has created a significant work in her Felice Lozarro—meaninglessly translated into English as Happy as Lozarro, when it might have been far more felicitous to simply title it “Happy” or “Lucky” Lozarro—that reads like a mix of fable and a metaphoric tale of a young Christ-like being. Lozarro, the Italian medieval name for Lazarus, the believer who Christ restored to life four days after the man’s death, and for whom Jesus wept. In this film he is presented as a beautiful, young, cherubic teenager (stunningly performed by Adriano Tardiolo) as a true “holy fool,” who lives in the small central Italian village of Inviolata, a place that seems, a bit like Brigadoon, a town that has mostly escaped contemporary life.

Unlike the Scottish village, whose citizens joyously are brought back to life for one day in each century, the Inviolataese work hard every day for the bitter Marchesa Alfonsina De Luna (Nicoletta Braschi), the self-described cigarette queen, who also raises other vegetables which help to make her rich, while her citizenry are kept ignorant and in debt. Each month her overweight overseer (Natalino Balasso) arrives to declare each of them guilty of spending far more than the amount of pay for their labors owed to them, creating an indentured world that might almost match the Jim Crown US South.
Nonetheless, Inviolata’s workers make the best of it, while cursing, under their breaths, about the ruthless, yet pratriarcal Marchesa, who knows that even if they hate her, they need a system in which they can work in order to survive. And despite their living conditions, wherein, in some small homes there are 18 inhabitats, they seem to make the best of it, celebrating love, enthusiastically sharing the little quantities of wine, cigarettes, and food they have, even as they gripe.

At the very lowest level of this horrible hierarchy is Lozarro, who is never offered anything to eat at these celebratory occasions—and, in fact, consumes no food throughout the film. He is the go-for of their world, the one they order about to fetch up the tobacco leaves they pick from the fields, to lift their crates, to carry off the crippled grandmother who appears to be his only relative. At one point, Lozarro runs off to fix coffee for the field workers only to discover, upon his return, that they have all wandered off.
Strangely, none of this abuse disturbs the happy Lozarro in the least. He works endlessly and willingly, always with a smile pasted to his face. And he is also one of the few villagers invited into the Marchesa’s house—for she too makes use of his absolute servility—and it is there he meets her most unhappy son, Tancredi (Luca Chikovani), who has been brought home after, apparently, several debauched years, and is now locked away in the virginal world of Inviolata.
The frail, young blond Tancredi, who appears to be suffering from consumption, or, perhaps, is just suffering lung cancer from smoking to many of his mother’s cigarettes (as he explains to the innocent Lozarro, “Every time I cough, I need to smoke a cigarette.”) slyly befriends Lozarro and seduces him into helping to pretend that he has been kidnapped in order to get the money to escape her clutches.
If this is no sexual seduction, it might as well be for the innocent one, who is convinced, when Tancredi tells him the truth—that the Marchessa originally was just another woman from the village with whom his father had sex and that, for all he knows, Tancredi, who has never known his parents, might as well be his half-brother—is reconfirmed in the innocent’s mind when Trancredi, unable to prick his own finger in order to seal his signature in blood, uses Lozarro’s blood. In the mind of this child-like believer Lozarro this truly does make them “blood-brothers.” 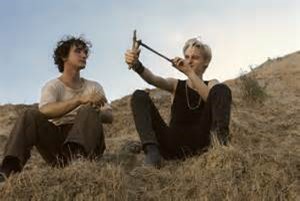 Lozarro takes his new and perhaps only “friend” away to his version of the Wuthering Heights’ Peniston Crag, a high mountain crevice where he has secretly made his own place of escape. Bringing his new friend there is as close to a sexual rendezvous that Lozarro will ever encounter, and in his attempt to feed his new friend, who has now moved into deep ditch (a symbolic burial grounds), after Lozarro has fallen into a “fever”—surely a not just a sudden illness, but a psychological reaction to his new-found friendship)—results in this saint’s fall from a high cliff.
With both boys having now gone missing a maid calls the police, who discover a village that in its horrific conditions stands against all Italian modern codes of living, clear out the town, arresting, presumably the Marchessa who has created these insufferable conditions.
Most of the critics writing about this film, who I read, suggest that there is now an incredibly sudden shift in the film, concerning which, as A.O. Scott, for example, writes:

Midway through, just as we’ve accepted the semi-fantastical parameters of Lazzaro’s world — his half-secret friendship with the Marchesa’s son, Tancredi (Luca Chikovani); his chaste infatuation with a young woman named Antonia (Agnese Graziani) — our perspective changes. We suddenly see the landscape from above and hear an ancient folk tale in a woman’s voice, and the film takes a double swerve, into harsher realism and more explicit magic.

But, in truth, Rohrwacher takes us quite gently into to this new world by suggesting that the police have ousted most of the previous Inviolata tenants simply in order to save them, to allow them entry into the modern world. Only Lozarro—who like Lazarus and a bit like Rip Van Winkle, wakes up again into life, after having been sniffed out and rejected by a wolf (a major metaphoric figure in this film) who refuses to eat him, declaring that he has sniffed out a totally “honest man”—returns to the village to find thieves removing whatever they might find of value in the Marchesa’s abandoned house. If he frightens them, he still innocently leads them to her drawer of “cutleries,” and even begs them for a ride into the urban future. When they reject him, he walks into a world he might never have imagined. And it is a wonderment to behold, as he discovers, still dressed in his light sweater and loosely knit pants, huge power-lines and gigantic towers of communication. 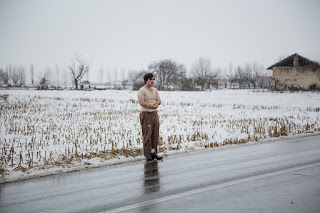 The world he discovers in Milan and other northern cities is made up of the same people of his small village, now, given their newly established hierarchical roles, forced to steal and sell their gains in the underground. Only there is now a very big difference: they have all aged terribly, almost forgetting their past, while the happy Lozarro has remained ever young. Not only do they, at first, not recognize him, they reject him—until Antonia, the woman who was serenaded in the very first scenes of this film (now played by Alba Rohrwacher, the director’s sister) recognizes him, and forces the others to allow him into their own current metallic hovel.
Here, Lozarro, despite the same conditions, essentially, he has suffered in the past, is still in love with life, eagerly willing to help out with everything. But his sad re-encounter with Tancredi, where we now perceive the young blond now as an old, stringy-haired barfly, says everything. The wolves have won, and the old world he knew is now about to die.
Throughout the film, Lozarro is seen as going into a kind of trance during lonely removals from the world in which he exists during which he seems, despite everyone else’s perception of his intelligence, to be considering things, to be evaluating a world in deep concentration.
Near the end of the film, when his fellow travelers suddenly hear a heavenly music that has left the local cathedral simply to follow them, the innocent turns away again in deep thought. They joke about returning to Inviolata to reclaim what is left to them as squatters. But we know these now somewhat aged street-folk will never be able to reclaim their virgin state. And, so too, must Lozarro know that the past cannot be reclaimed.
Yet he attempts just that, awkwardly trying to enter a bank, setting off their alarms as he approaches through the wrong door. Behaving, as he does always, rather oddly, the customers suddenly determine that he is armed, and in terror, move away from him. When he perceives their own odd behavior, he moves toward them, trying to explain to himself why they are so fearful; all he wants, as he explains to the tellers, is that everything left behind be returned the Tancredi—not, evidently, even a customer of that particular bank.
When the terrified customers perceive the intruder’s innocence, and that the gun they thought he was carrying is simply a slingshot, a gift by Tancredi, they attack him, and one by one, beat him to the ground. The wolf reappears, evidently now ready for his feast. By the time the police arrive, the “holy innocent” is bleeding and appears to have died.
The movie leaves us with the notion that, if he is to survive and come to life again, it can be only in our belief, in our imagination. Like Christ, I wept. Happiness is such a rare thing.


Posted by greenintegerblog at 11:00 AM