seeing the world
by Douglas Messerli

Way back in 1963, the great French director Jean-Luc Godard showed us where many of today’s “yellow vest” protesters come from, the country outposts of the French landscape, some, like the Stan and Laurel-like brothers, Ulysses (Marino Masé) and Michel-Ange (Patrice Moullet)—about as far away as you can get from the great voyager and the talented artist—living, as these two do, in a ramshackle hut with their equally ill-named wives, Venus and Cleopatra (Genevieve Gaela and Catherine Ribero), hometown beauties who are left behind. These poor idiots haven’t even been to Paris.
Suddenly they are visited my two military carabiniers (riflemen) who deliver them a letter signed by the King inviting them to join the war. What war, you might ask? In Godard’s dark anti-militarist satire, it hardly matters as—after being assured that, as Roger Ebert summarized, “they will be allowed to loot, plunder, deface, see the sights and in general have a smashing time. ‘Will we be able to slaughter the innocent?’ asks Ulysses. "Of course," the carabinier snaps, ‘this is war.’" They are even promised swimming pools, Maseratis and Ferraris. With pure anticipation, the brothers enlist.

The war or, I should say, wars that follow represent a trek through Europe, the mid-east, the far-east and even the US that might suggest any imaginable battle that existed in the 20th century. And their adventures, other than their occasional participation in precisely those activities they were promised—plundering, raping, torturing, and creating general mayhem—is structured around postcards which they send home featuring the sites (among them the pyramids, the Parthenon, and the Leaning Tower of Pisa) along with their impressions of their adventures. Indeed, these wide-eyed innocents might almost be perceived to have become true adventurers and artists in their discovery and evident enjoyment of the world they finally get an opportunity to encounter. 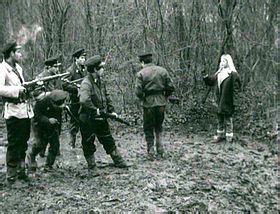 Surely, the scenes of violence and death Godard shows us are not pleasant, but even the would-be heroes of this piece are made by Godard to be slightly ridiculous as they spout political slogans while standing before firing squads or race unnecessarily into harm’s way, whereupon the idiot brothers and others simply shoot them down.
Along the way there are also delightful scenes, as when one of the brothers visits his first movie theater, attempting to join the naked star in her onscreen bathtub. And, even occasionally, a war scene itself, as when Godard, working in black-and-white, suddenly lights up the screen with a burst of fireworks that signifies to the villagers and to the two dumb brothers that the war is now over, represents a startingly beautiful series of images.
Pauline Kael inexplicably found the first hour of this 1 hour and 20-minute film “pure hell”—as I have made it apparent through the My Year volumes, I do not share the adoration that some of her readers have awarded her over the years—yet I do agree with her that the best scenes of Godard’s black comedy are its last, where we discover that the riches the brothers have returned home with consist of a suitcase of postcards, catalogued into various topics, which tell the story of their numerous adventures. Like tourist connoisseurs, the two lay out for their wives, again and again, the signifiers of their many years of travels, lovingly displaying them with perhaps a far greater joy than their actual experiences. Like my mother, who always enjoyed travel more in hindsight that, in reality, these brothers almost come to worship their past peregrinations.

Alas, as Godard makes in this black comedy clear, all good things must come to an end. As soldiers for the losing King, Ulysses and Michel-Ange are now traitors, and new carabiniers suddenly appear upon the landscape, this time stand them up against the wall to shoot them as participants on the wrong side of the previous wars. As the director makes clear, there are never any winners in warfare, socially nor as survivors in real-life. Through the voice of his narrator Godard reiterates who these innocent fools they have been all along: “Henceforth the two brothers slept for an eternity, believing the brain, in decay, functioned beyond death, and its dreams are what constitute Paradise.”
If this represents high sarcasm against the ignorant faith of the masses, it is also—given the scenes of simple joy they express in reviewing the images of their life adventures—an almost Pasolini-like praise for the common man. Sometimes delusions are simply better than reality. And, after all, unlike so many of their peers, they did see the world.