Joel Coen and Ethan Coen | The Ballad of Buster Scruggs

masters of mayhem and death
by Douglas Messerli

Those bad-boy brothers of American cinema are at it again in their new anthology of 6 short films, The Ballad of Buster Scruggs, serving up along with Thanksgiving dinner, mayhem and death. I used to describe Joel and Ethan Coen as being cynical, but over the years I guess I become inured to their so very well-made films, now preferring to perceive most of their works as American versions of the Grand Guignol theater, a popular French-born format mostly featuring rape and death, with larceny, robbery, and other dark-doings dropped in for free.

In many ways their film-making is a sort of arthouse version of the films of Tod Browning with a large dash of James Whale thrown into the brew of spices of Charlie Chaplin and Buster Keaton, whipped up with a postmodern syrup that gives us a stew that despite its sour aftertastes is utterly delicious. Yes, I mix my metaphors, but so too do they. 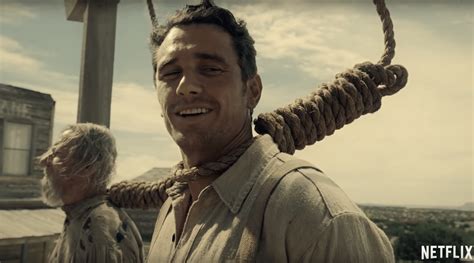 Throughout their work the brothers have treated the most serious topics not simply the way the Grand Guignol masters did, as subjects of absolute fascination and utter significance, but as only Americans might, with a sense of innocence and good humor. If you’re going to kidnap a baby, you might as well leave him on the roof of your car (Raising Arizona, the very first Coen brother’s movie I saw with Dennis Phillips in Sacramento), if you intend to create a Frankenstein, you can’t do better than Anton Chigurh (No Country for Old Men). And it is no accident that these always winking kids choose Western shoot-‘em-up myths as the background for some of their films, in particular True Grit and now the 6 films that make up The Ballad.
It doesn’t hurt that the Coens’ work with some of the very best cinematographers (in this case Bruno Delbonnel), composers (central to the film replete with singing cowboys are the musical compositions in this work by Carter Burwell). And it very much does matter that over the years they have employed some of the best of Hollywood (and non-Hollywood) actors as their performers. In this instance, the Coen’s have gathered young and older actors such as Tim Blake Nelson, James Franco, Liam Neeson, Harry Melling, Tom Waits, Zoe Kazan, Jefferson Mays, Tyne Daly, and numerous others—all quite excellent.

Such a large concept, its immense cast, and various locations—the most difficult of which was “The Gal Who Got Rattled” which required 14 wagons shipped to Nebraska where they filmed and many sets of stubborn oxen and other desert locations for the first, title film and the second, “Near Algodones,” wherein the brothers satirically recreate a “literal” pan-shot when the bank teller who has been robbed comes after the robber draped with pans for protection from any bullets that might be sent his way.

There are lots of such witty cinematic allusions, including the hilarious rise of the singing cowboy as an angel, lyre in hands, after his death or the wonderful theatrical mish-mash of Shelley, Shakespeare, the Bible, and Lincoln in one of the very best of these films, “Meal Ticket,” in which the lovely armless and legless actor is replaced with a chicken who seems, like the horse Clever Hans, to know how to add and subtract.
Although I am well known as the spoiler of all times for those who hate to not know ahead of time what the story is—I have myself never cared about knowing the “plot” before seeing a film, focusing instead of how that story is told—I will spoil no further plots this time ‘round. I think I’ve already suggested that all of them ends in single or multiple deaths. The stories are all fascinating in the manner of Bret Harte and O. Henry, with multiple ironic twists and turns. And the Coen’s use of the Western American landscape is stunning and complex.

This time, moreover, the cleaver brothers have chosen not to release this through a major studio—studios who might surely have all turned the proposition down after 25 years, purportedly, of their work on the project—in order to get their work produced, in this case by the ambitious on-line streaming service Netflix, who released the film to theaters only for a short period, thus delimiting theater revenues. Somewhat like the great European directors, among them Godard and Fassbinder, the Coens have now perceived how to go around the system in order to create something that Hollywood producers simply cannot perceive as safe investments. But oh what a lovely contribution this is. In the hands of Joel and Ethan Coen death is a lovely thing to behold, frightening and as brutal as it may be. I don’t quite comprehend how Netflix evaluate their successes, except for their overall subscribers; and this work has generally been ignored in all the award season selections (which it certainly shouldn’t have been), but kudos for them for having funded such a controversial masterwork.


Posted by greenintegerblog at 10:10 AM