Israeli director Ofir Raul Grazier’s first feature film is a gentle realist work, with little experimentation involved, but which is nonetheless complex and watchable. The Cakemaker, might almost be characterized as one of the numerous food-based films (think Tampopo, Babette’s Feast, Julie & Julia, and Chocolat)—except that this work explores, along with baking in this case, the issues of religion, sex, cultural separation that are also the subtexts of two of the above films, Babette’s Feast and Chocolat, in an even more challenging manner.
Not only are the major protagonists, at least in the early part of the film, an Israeli and a German, a married man and a single baker, but together they have a gay relationship in Berlin. They quickly fall in love with one another in Thomas (Tim Kalkof) small café, which the Israeli-based Oren (Roy Miller) has apparently visited previously, since he not only orders up the baker’s German Black Forest (Schwarzwaelder Kirschtorte) Cake, which the thin man chows down with relish, but orders a container of Thomas’ cinnamon cookies, which his Israeli wife, Anat (Sarah Adler), he reports, loves. After finishing his sweets, the stranger asks if the baker might suggest what Oren might buy as a birthday gift for his young son. After inquiring what the father does for a living—Oren works for an Israeli-German train corporation—he suggests a nearby toy shop where model trains are made and painted by hand. And we suddenly realize, when he asks if Thomas might accompany him to the shop, that something is a bit odd here. By next scene we see are the couple about to kiss. 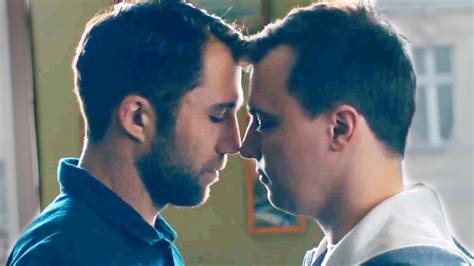 The next scenario already establishes that the men have become regular lovers, Oren living with Thomas every time he visits Berlin. Yet, Grazier creates an even more subtle relationship between the two as Thomas queries the obviously bisexual Oren about his sex-life with Anat, suggesting that he, too, might share an interest in women. In short, before we have gone far into this film the director has already established at attitude of sexualities that accords with his equal presentation of massive cultural differences, a young German male living with an Israeli Jewish man.
When Oren leaves to return to Jerusalem this time, he forgets both his keys and the cinnamon cookies, leading Thomas to call him on his cellphone. There is no answer, again and again, until finally he attempts to contact his lover at his office, where he told that Oren has died in a car accident. And it is at this point where Grazier’s would-be tale of an odd gay couple becomes something even stranger, as Thomas determines to travel to Jerusalem to discover, so we might imagine, what happened to his former companion.
My clause, “so we might imagine,” is important since the director never tells us what his characters are truly thinking, but represents it only in their silent actions, made even more silent in Thomas’ case when he arrives in the Hebrew-speaking world of Israel, where people can communicate with him only in English. Things are not made easier by the fact that, as Grazier clearly shows us, his world does easily embrace outsiders—particularly German outsiders.
Moreover, the audience is itself put on edge as we recognize that this particular outsider is almost literally stalking Oren’s wife and child Itai, going so far, with the use of Oren’s left-behind keys, as to open up a locker at a local swimming club and slip in to the dead man’s swimming trunks.
Ultimately, he even finds employment as a dishwasher/shopper in the café that Anat owns, gradually inserting himself into her and Itai’s life. Given the stresses on Oren’s widow and son, not only the sudden loss of their major provider and clearly a loving husband and father, but along with the constant religious reminders impressed upon her by her brother Moti (Zohar Strauss), it is not terribly difficult for Thomas to enter their lives. When her son suddenly goes missing as a runaway from school, the baker is asked to take over the kitchen, pitting peppers so that that they might be stuffed. We know what she does not, that he is an expert chef, and that he now will be unable to resist the empty oven. Yet the very fact that he opens the oven to bake his delicious cookies is perceived by some as a grave indiscretion. 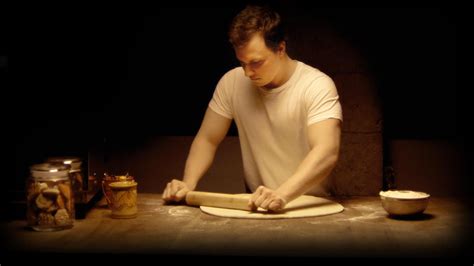 When Itai arrives at the café, Thomas skillfully handles the situation by serving him up a hot chocolate and, when Itai finally comes into the kitchen by his own will, allowing him to help decorate the cookies. It is a lovely scene wherein we realize that Thomas might also be a loving father to a child, one which the returning Anat witnesses from a nearby window.
Yet her brother is furious when he discovers that Thomas has dared to open the stove, which might mean that his sister would lose her Kosher status. And just like the endless microphonic calls to Sabbat, his are shouts of exclusion rather than embracement. However, the not so religious Anat continues to sell Thomas’ cookies to great success. Although Moti may be wary, he helps to find Thomas a nice apartment and invites him to Sabbath dinner. When he later shows up, invited, to Itai’s birthday party with a delicious cake in hand and somewhat drenched from a rainstorm that has impeded his visit, Anat tells him to change into her husband’s clothes, and the tale spins round to an artful conclusion.

Finally made curious about her husband’s remaining documents, she opens the box to discover his numerous receipts from Thomas’ Berlin bakery and begins to perceive the truth—which in this lovely film is never openly spoken. Eventually the two, Thomas and Amat, have sex, soon after which her brother hands him a ticket back to Berlin.
Amat, the seemingly accepting one, however, follows him to Berlin. We don’t know whether she plans to confront him or to begin a new life with her husband’s former lover in another world. As throughout so much of this lovely film, the intentions of the characters, even their intimate feelings, remain secret and are kept in silence. Individuals behave in ways that cannot always be known, only witnessed in their actions or what we believe are their actions. Love and sexuality are always an undiscovered territory that cannot be easily explained.

Posted by greenintegerblog at 10:25 AM