beauty the destroyer
by Douglas Messerli

Jacques Rivette’s 1966 picture La Religieuse (The Nun), based on Denis Diderot’s novel of the 18th century, is really four major episodes patched together into a full film. It’s not precisely that the work does not weave together these parts, but that despite the fact that they all center on the adventures of a young innocent, Suzanne Simonin (the always radiant Anna Karina), but that they offer such entirely perspectives of the period that they are difficult to reconcile.
Indeed, perhaps I should say there are actually 5 perspectives, beginning with the seemingly loving home life of the young beauty, which once her elder two sisters are married off with large dowries—a requirement of the day—leave nothing for her, which means for the family that she will have to be sent off to a convent wherein she will nicely disappear from their consciences. 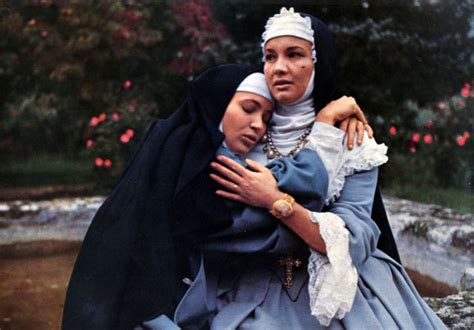 Surely there must be several books on how second sons and third daughters throughout the 17th-19th centuries were horribly destroyed by the fact that their wealthy parents simply couldn’t afford to marry off and support their younger children.
Dozens of novels and plays deal with that very fact, usually leading to comical (in the case of Tom Jones) and tragic results of the financial dealings of the gentile lives of their parents. As if they were all “drunken sailors,” parents had to determine what to do with their later offspring whom they simply could not equally support. In a sense, that is even at the heart of many of Jane Austen’s fictions. When marriage equals money, it produces serious problems even up until the 20th century when in Capra’s Pocketful of Miracles, the temporary husband of the heavy-drinking Bette Davis is forced to play a billiards game in order to settle the matters of the dowry. Even the peaceful family drama of I Remember Mama must pretend to deal with such issues. Women quite obviously needed to be sold off to their husbands, and younger sons were truly a nuisance. Only if you were the heir apparent might you expect to receive a decent survival in a world, particularly for women, it was not a nice place if you didn’t have cash to spend in it.
What is worse is that the beautiful, well raised Suzanne, like Tom Jones, is the product of an illicit romance her religious mother, in this case, has had with another, unnamed man. Her guilt about her actions is confused with her intentions to send her daughter into hell—supposedly a life in a highly religious convent—in order to resolve their financial difficulties and absolve her own guilt.

Suzanne, given her careful upbringing, is deeply religious young being; but also is a proto-feminist, who resents the very idea of being sent off, to what Los Angeles Times critic Justin Chang has described as a true prison. As Chang beautifully described the second perspective of this movie, it “might be one of the greatest prison movies ever made and certainly one of the most controversial.” For that is precisely, after the young girl, dressed in the wedding dress young novices must wait to wed their lives to God, rejects, declaring that she has no vocation in her commitment to religious conviction, which is perceived as a scandal—after all, her mother has also had to pay (through secretly pawned jewelry) for her entry into the convent! Everything in this world is based on financial transactions, which might truly remind us of the world in which we currently exist.

Sent back to the convent, this time with the truth of her birth revealed, the beautiful Suzanne, who a bit like the beauty in Cocteau’s Beauty and the Beast, is resented by her sisters and mother, is sent off to a castle from which there is no escape—but, in this case, without even a loving father who might come to rescue her. There are elements in this story even of Snow White, a woman forced to suffer torture, particularly after the death of the one caring Mother Superior, Madame de Moni (Micheline Presle), and endless sleep without food—in this case with torture and beatings.
Her white knight is the improbable lawyer, Dom Morel (Francisco Rabal), who warns her of what she will have to endure if she brings a lawsuit to escape the clutches of her prisoners. He even foretells, as what we later perceive is far too true, that she may not win her claim to return to the world outside the convent walls. The society who has locked her up is determined, for numerous reasons—hypocritical morality, financial concerns, and simply dispassion—to keep her where she is. And, moreover, the social structure does not easily accept change, while the radical alterations she has demanded stand against the bulwarks of the current French culture, with only a few outspoken figures attempting to totally transform the culture in which they exist. One must imagine an outspoken philosopher, if he or she might still exist, speaking out against the imprisonment of blacks or the immigrant children in our own time: their voices might be loud, but they are seldom heard. Suzanne loses her case.
Fortunately, or one might proclaim “unfortunately,” Morel helps the suffering Suzanne to escape to another convent, this one a seemingly loving enclave, where she is treated as a kind of special supplicant to the Mother Superior, Madame de Chelles (Liselotte Pulver), a lustful lesbian who is determined to take the new beauty under her personal “wing,” while others, obviously comfortable in this Sapphic paradise, rush laughingly around one another with joy, behaving nothing like women devoted to God. Only Sister Thérèse, the former favorite of Madame de Chelles warns the new member of their order of the dangers she must face.
The young innocent nun is confused—by everything, her newly aroused feelings of joy and contentment, her own personal commitment to the religion, and, of course, her own inability to find vocation within the confines of the life she has vowed to live. Confessing to the local monk, she is advised to stay far from the truly “Satanic” influences of Madame de Chelles (strangely a term that had previously been applied to herself). Is she Satan or is Satan present in the world all around her? She has no way, apparently, of even comprehending evil.
Sent away through a complaint by the Mother Superior (or perhaps by his own tender feelings for the nun to whom he must attend) the elder confessor simply disappears, a new, younger monk taking his position, a man who confesses to his confessor that he feels very much in the same position a her, locked away in a religiously sanctimonious society in which he does not feel at home.
What also becomes quickly apparent to everyone but Suzanne herself is that he too has fallen in love with her, forcing her to keep a distance from her Mother Superior while he plots her escape. For people like us, he confides, there is only escape or a jump into suicide, re-planting the seeds of what Suzanne has already imagined for herself.
Suzanne agrees to his plot, but quickly realizes, when he attempts to rape her, that her actions have been for no avail; that he simply plans another kind of imprisonment for her. And indeed, when his plot is revealed to authorities, he, himself, is imprisoned. She has no choice but to again escape, this time into the indenturement of a cleaning woman for a provincial French household. The newspapers and gossip of the day warn her even away from this rustic world, and she choses to run again, this time into the poverty of the streets, begging for a few coins in order to survive.
Once more she is seemingly saved by a passing figure, a well-dressed woman who takes her home in order to protect her. Suzanne is once more pampered and given a beautiful dress to wear until she realizes, at the evening party, that the role she has been chosen to play this time is a courtesan in a high-class bordello. The approach of a customer forces her again to flee, this time through the window the monk has suggested: to her death.
If this is a high melodrama, it is also an amazingly well-wrought and beautifully filmed New Wave protest against religion, and most particularly, the Roman Catholic Church. Faced with serious challenges by French censorship authorities, Rivette worked time and again to bring the language into a context that did not threaten the church leaders, even adding a ridiculously long introductory statement which expressed that this was, after all, a fiction and did not represent the way the Church had in any way truly behaved. 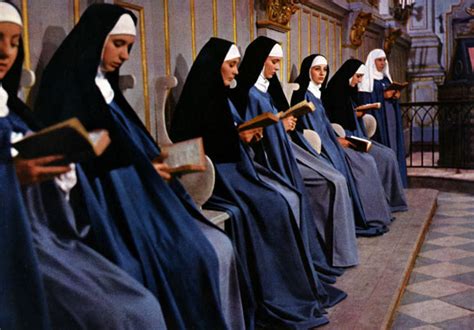 All lies, of course, and in a later 2007 film, The Duchess of Langeais, this based on a story by Balzac, some of the same territory is repeated, since the major figure of the work is also incarcerated and tortured in a convent. Religion, we know, has not always been the best source of protection for its believers. Ask the thousand and young men and women preyed upon by priests, or the masses of innocents who have gone to their early graves believing that what the Church spoke was the Holy Word of God.
Even though Rivette had the permission of the censors, when the movie was about to open, the French press and religious figures shouted it down. Only in Cannes did it finally receive a fair hearing, and even then the film did not appear in Paris theaters until the following year.
Just as importantly, Rivette’s film is not only about religion but about the restraints put upon women, then and now. Suzanne may have never been quite able to comprehend her role as an outspoken representative for her sex—she was clearly just as uncomfortable in the ordinary world as she was in the world of the sacred—but she knew something was wrong, that being forced into a role in which she didn’t feel comfortable to embrace, she was being robbed of her identity. Diderot, long before Rivette, realized that. Instead of being asked, she was being told how to behave and survive in a world not at all accommodating to her own sensibility. And she rebelled against the very idea, again and again, with no choice finally but to destroy herself in the process. The “MeToo” movement, and numerous other contemporary issues all seem, in this film, too close to bone to watch it comfortably. This is an edgy movie even today.

Posted by greenintegerblog at 12:34 PM