a world somewhere else
by Douglas Messerli 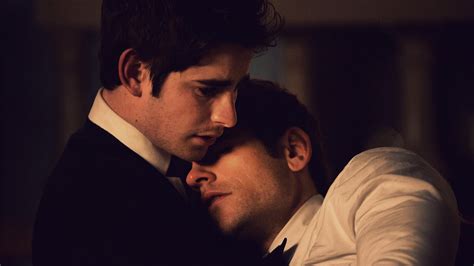 Joey Kuhn’s 2015 film Those People is hardly a profound film, preferring to study desire rather than intense romance. But this is also its gift, given that for one of the few times ever that sex is not at the center of a LGBT film.

Unfortunately, what Kuhn replaces the sexual element with a focus on wealth. The young Charlie (Jonathan Gordon), a not-very-convincing artist, who mostly paints portraits, pines for his fellow boarding-school rich-boy friend Sebastian (Jason Ralph), a character who quickly comes to be perceived as a kind of stand-in for the scandalous Bernie Madoff, whose son, Mark,  committed suicide 2 years after his father’s arrest for defrauding thousands of Americans.

Mark, in real life, was apparently straight, having two wives and children to boot. But in this film his fictional personae is a hard-to-get but needy young beauty who seeks out a lot of people, men and women, in order to fulfill his own sense of worth. Unfortunately, Charlie, openly gay, has fallen for him, and finds his demands impossible to reject, including Sebastian’s demand that he move in with him. A bit like Gatsby, Sebastian (a character that shares some of the sadomasochistic appeal of the Tennessee Williams-scripted film’s character Sebastian Venable in Suddenly Last Summer) is a man so compelling that the confused Charlie simply cannot resist his charms. And, in a sense, the film, symbolically speaking, is about the young artist’s attempt to digest and spit out the bones of his own attraction to the man who has been taking advantage of him. 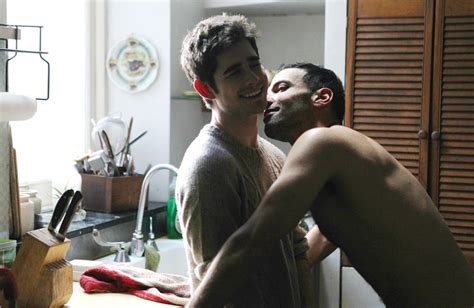 Fortunately, or unfortunately—depending on how one ultimately interprets this movie—Charlie also encounters, on his desultory travels through New York’s bars with Sebastian, an older piano player, Tim (Haaz Sleiman), a Lebanese man, who might at first appear simply as a part-time player, but whom we later discover is also a concert pianist of some note. The two hit it off immediately, the younger painter quickly bonding with the elder. When the two finally do couple, if only for a short while, we know immediately that Tim is the right man to lead Charlie into the new life he deserves.
But, of course, youth never can quite comprehend what they need to do, and as Kuhn demonstrates, there are always endless twists and turns as this younger man attempts to sort out his feelings for Sebastian in relationship for the far more sophisticated and culturally separated Tim.
I do wish Kuhn’s film had more fully explored these vast distances between the obviously privileged Charlie, his friend Sebastian, and the far more talented pianist, but the director seems locked into his pattern of outsider desire. For Charlie, even if he has found his way into the world of wealth, is still an outsider; and so too is Sebastian, now detested by everyone around him for his father’s sins. Strangely, the true outsider, Tim, seems more at home in his chosen world, having obviously made his way from a bar-room pianist to a concert-one. The privileged are, at least in Kuhn’s terms, the truly disadvantaged, without truly realizing it.

Even if Charlie is somehow, rather unconvincingly able to talk this version of Madoff’s son out of committing suicide, we finally realize if the young man is to survive, he must leave his desires for wealth, beauty, and grandiose comforts for something else, something foreign even to his life. He does toast goodbye to Sebastian, but we can’t yet be sure, at film’s end, whether he can reconnoiter with Tim, who has now moved on to a position as the pianist for the San Francisco Symphony.
Only the film’s title suggests that he might be able to now join the human race against “those people.” Yet we can never know certainly who those people are, the ones on the outside or the ones within, for Tim has now also entered the world of privilege, and if Charlie rejoins his friend he will also enter that world. It appears that in Kuhn’s vision the people of whom he speaks are always somewhere else from where he or we are.


Posted by greenintegerblog at 9:39 AM