Looking back on the reviews I’d done so far on Todd Haynes’ films, I realize—having just this week seen his first feature movie, Poison—that perhaps I have been a little to critical of his very lovely to watch and carefully structured works. I still believe that his films, so interlinked with the 1950s and early 1960s melodramas, are somewhat stereotypical—although in an utterly opposite way than most early works which involved gays and lesbians—and delimited by their intense historical contexts. One simply must recognize them as rather dour, suggesting the tragically closeted and bigoted worlds in which films like Far from Heaven and Carol. 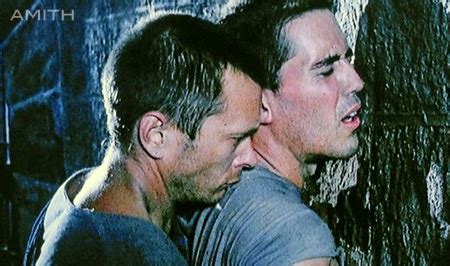 Having lived through those same years, I, as a young man, certainly suffered some of the homophobic closeting and was aware of the bigotry all around me. I was forced into blackface by my high school drama teacher in the musical Finian’s Rainbow during which its three or four performances I put on the shoe polish to play a young black boy—not to satirize the child but because our school had no blacks, and I am sure Marion Hulin, the singing teacher, must have felt that in a work about poor Southerners and black share-croppers that there had to be a least one black being; and, at 13 or 14, I was chosen for that task. I didn’t even comprehend it as a blackface performance. I was a little black boy—even if I didn’t comprehend what that meant. I didn’t do it for entertainment; it was simply who I’d been told to become.
Yet during that same period many of us did find freedom and enjoyment, and even some deep pleasure in our being different. Unlike Douglas Sirk’s bleak depictions of the period, this Douglas discovered that the real problem was in his own ways of thinking more that in the homophobic values of his father and community. And to this day, I wish I might have realized that I could have had sexual enjoyment with two of my favorite seniors, one of them about which I’ve already written, another Doug, in My Year 2005.
Film helped me to see that the world was much more open to what I feared about myself than were the home and town in which I lived. Somehow, I perceived that Cary Grant, Rock Hudson, Sal Mineo, and then teenage-girl heartthrob Tab Hunter, and even James Dean (whatever his sexuality) were more like me than the local boys who taunted me for being queer—even though I wasn’t even sure what that meant. I’d had no sex. I’d never kissed a boy, never enjoyed even a winking glance. In many ways I was as naïve as Oliver Twist, and would have loved to be taken in to Fagin’s den.
But Poison was a kind of revelation, a work that demonstrated that Haynes was perhaps more radical than I had previously perceived him to be. For in this 1991 film, the young director, born more than a decade later than I, perhaps took the melodramas far too seriously (I’ve also written an essay on how liberating some of life of the period truly was), yet in the era when AIDS was killing so many gay men, Poison, brilliantly interwove three different tales of alternate sexualities and their consequences. All end sadly, alas.
The first, presented in a kind of news-documentary manner, concerns a young 7-year old boy, Richie Beacon, who inexplicably killed his father and “flew out a window.". Yet we know that he must have been abused, either verbally for his sexuality or sexually attacked, and sought a revenge which no one in the community in which he lived might have imagined.
In the second tale, “Horror,” shot in the black-and-white shaky camera movements of a grade B horror movie, a kind of mix of Doctors Frankenstein and Jekyll, creates what might have been a wonderful discovery, worthy of display in the film Barbarella, of a way to turn the sex drive into liquid form. However, after swallowing a dose, he turns into, as film critic David Ansen describes him, a “pustule-dripping fiend,” described in the papers as the “Leper Sex Killer.” This, obviously, is a statement about how many saw AIDS, and the tragedy of his life is made even more evident when only a woman colleague can see any beauty in him.
The final strand owes a debt to the great gay author, Jean Genet, wherein a young man lusts after a fellow prisoner—although in this prison, as in Derek Jarman’s earlier (1971) soldier’s garrison in Sebastiane, where nearly everyone enjoys gay sex. I do feel that this final section, titled “Homo” is a bit over the top, creating what some critics described as an almost “designer prison.” But we can presume, surely, that some of these men have been imprisoned just for their sexual desires. And, although real sex is not depicted, in is the most homoerotic of the three pieces.
I remember the NEA attacks in those years. I was on a literary panel that I found absolutely disgusting, and my companion Howard had been on the art panel that awarded Andres Serrano’s 1987 Piss Christ a grant. An outcry in Congress, led mostly by Jesse Helms of North Carolina, resulted in grants being stripped from several performance artists and the cancelling of the Robert Mapplethorpe show at the Corcoran Museum of Art. The independent Washington Project for the Arts, led by Al Nodal (later head of arts for Los Angeles) and where Howard was Chairman of the Board, presented the show instead.
The “poison” was already in the government and society at large. At the American Publishers annual show that year, an assistant to then-chairman of the NEA John Frohnmayer hissed into my ear of how much damage Howard and I had done.
Given Frohnmayer's and other’s lack of vision and support for the panels’ more controversial decisions, I refused to even apply for a NEA grant for my Sun & Moon Press, in those days a non-profit organization. I wrote letters to many of the Senators explaining my position, yet only Senator Diane Feinstein from Northern California wrote back, scolding me and insisting that she agreed with the spineless Frohnmayer.
I mention all of this only because in that poisoned atmosphere Haynes and his film was also involved. As critic Dennis Lim writes:

Rev. Donald Wildmon, then head of the American Family Association , as Ansen puts it:

Those were the days. And today…?

Even Frohnmayer spoke up in support of Haynes’ film. And the work quickly became, along with works before and simultaneous to it, Tom Kalin’s Swoon, Christopher Munch’s Hours and Times, and Gregg Araki’s Living End, as described by critic B. Ruby Rich as the “New Queer Cinema,” which gave audiences and other cinema makers such as Ira Sachs, a new way to perceive their situations.
I can’t say that I loved Haynes' early film. There had already been much more before it that has never been documented. But I’ll surely credit its re-empowerment of what being gay, in those years of Reagan and later Bush, was. We were thrown to the wolves and saved ourselves through our own imaginations. As Freddie Mercury sang so very powerfully, “We are the champions.” At least those of us who survived. One of Haynes’ early boyfriends, James Lyons, who played in and edited Poison, died of AIDS in 2007.

Posted by greenintegerblog at 10:37 AM