the man in white
by Douglas Messerli

Increasingly, through the years, as I have watched the films of Hiroshi Teshigahara based on writings by Kōbō Abe, I have come to see him as one of the most innovative of Japanese film directors. In even his first feature film, Pitfall, which I saw the other day, I discovered a breathtaking  work that brought politics into a kind of surrealist world, as an iterant miner and his young son get involved in Japanese union politics simply because Otsuka (Hisashi Igawa) is a dead-ringer for the a union boss, representing Union 2, who has dared to defy the more dominant union boss from Union 1. 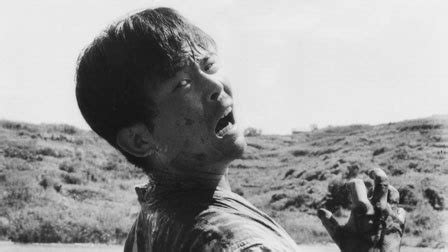 The lookalike Otsuka is stalked and later killed by a man in a white suit (Kunie Tanaka) when
he returns to an abandoned mine, surrounded by a strange ghost-like mining town which now has only one woman shopkeeper (Sumie Sasaki) who seems to sell only candy and trinkets to the ghosts, like Otsuka, who occasionally appear at her doorstep.
The odd mix-up of politics and ghost-stories is heightened by the modernist music of Toshi Ichiyanagi and Yuji Takahashi, and the sets, which present such a deep desolation that one might imagine herself suddenly transported into an ancient gold-mining town of the old West in the US. 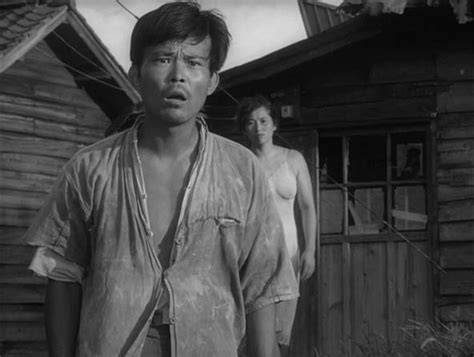 Here everything is gray and totally washed out, while the man in white and Otsuka’s son (Kazuo Miyahara)—murderer and hidden observer of all events, stand out in this ghostly landscape, the one because of his costume and determination, the other by his innocent beauty.
The only other witness to the crime is the shopkeeper who is paid by the man in white to tell a false story, further incriminating the lookalike union leader and his opposing union head—even though, in reality, these two have worked carefully together to restrain any worker resentment.

A bit like Billy Wilder’s Ace in the Hole, it is the reporters (particularly Kei Satō) who stir up events, suggesting to both union leaders that each other has plotted against one another.
When the two union bosses determine to visit the old mine for evidence, they come across the body of the shopkeeper, who has now also been killed by the man in white, after being raped by a local policeman. These men blame one another, eventually moving into a battle, which ends in both their deaths, while the ghosts of Otsuka and the shopkeeper look on, Otsuka desperately attempting to discover why he and the shopkeeper have both been killed.
As an older ghost warns, there will be no easy answers and what he might discover will be even more disturbing than the facts—truths they gradually discover as the man in white jumps onto his motorcycle, suggesting that everything has worked out precisely as planned, before he rides off into the sunset. 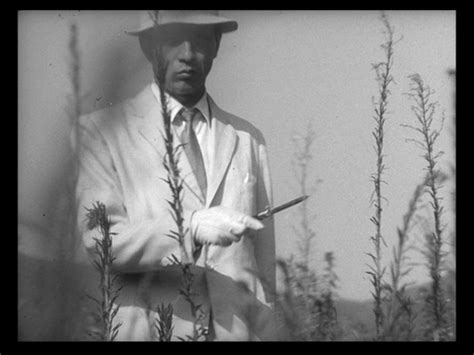 Perhaps the real “pitfall” here has not been a death in the dangerous mines, but Otsuka’s belief, despite his own nefarious attempts to make a living by operating in off-zone territories, that there is a single “truth.” He, at heart, is an honest man. Demanding that when his son steals a piece of candy from the shopkeeper that he pay for it.
Strangely, it is only the son who might be able to tell the whole story, although he is too young to speak it or to even assimilate the events he has seen.
And how might we account for the accidental “doublings” of appearance between Otuska and the Union 2 boss? Are they simply aspects of one another, a kind of earlier apparition of what the second Union boss was as a younger man? Clearly, they are twins of some sort, their lives intertwined in the mining world present and past. And why has the shopkeeper stayed on to serve a community which no longer exists. Both figures were ghosts even before they died.
One can only imagine that perhaps the man in white is the future itself, a kind of Rod Serling-like figure who imposes the demands of the future upon the world of the past. If nothing else, with the murders of Otsuka and the shopkeeper the Old Union mine is now only a city of ghosts. No one is there any longer to even care for it—except, we presume, in the later memories of Otsuka’s wide-eyed son. We might even suggest that this haunting film might be his own story.