I watched Pier Paolo Pasolini’s film Medea several days ago but couldn’t quite bring myself to write about it until now. Part of the problem is that the story itself is so confusing and shifting that it is difficult that it is hard to truly understand the role of Medea in her relationship with Jason (Giuseppe Gentile), his search of the “golden fleece,” and her pain concerning her many children who have been destroyed by Kresus (Massimo Girotti). 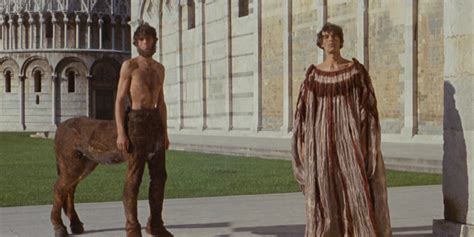 Medea, even in the myths, is impenetrable, and even the great Maria Callas, the remarkable opera star Pasolini chose for his Medea figure, hardly speaks in this film—and when she does only in translation. Mostly she glowers over the scenes this ritualistic tribe, who killing men use their innards to return them to the landscape in attempt to reinfuse it with their powers. It is a terrifying ritual that smells of a Euripdean world that Pasolini never quite explains. But then Pasolini is obviously seeking a world even darker than that of Euripdes.
People in this world are chopped up, for hardly any logical reason, and their parts distributed back into the earth, with the community participating in a cannibal-like feast. Mostly, the participants look on, including Callas, with severe observation, as if the entire community were transfixed by the central scene in Tennessee Williams’ Suddenly Last Summer. 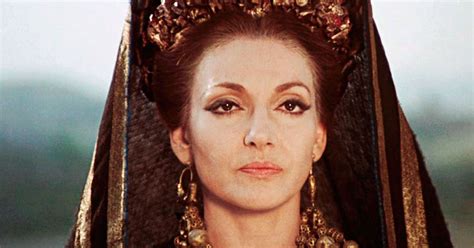 Whatever the source of Pasolini’s film, we are simply terrified by the brutality. And there seems to be no way out of this horrendous drama of hate and revenge, except in the earliest of scenes with the centaur (Laurent Terzieff) and the young Jason (Luigi Masironi), told, encouraged before he can comprehend the message by the centaur to reclaim his kingdom taken from him.
Although quite beautifully filmed, Pasolini’s movie is a confusing mix-and-match version of the Medea myth. And, since it is mostly presented in images, with very little dialogue, it is almost impossible to comprehend why Jason, upon his return to Corinth, turns his attentions away from Medea to Glauce, and why in sudden revenge Medea repeats the brutal ceremony we witnessed earlier in the film, the time destroying her brother Absyrtus before she turns on her lover and Glauce. As The New York Times reviewer Vincent Canby expressed it:

Medea is a primeval soul who erupts almost spontaneously
when transplanted into a civilization ruled by order. And this,
I think, is where the film goes awry. There is no real conflict
between Pasolini's conception and Euripides's Pasolini's
supplements the other's, but because nothing in Pasolini's
imagery in the scenes in Corinth is equal to the passion of
the original text, or to Pasolini's own scenes early in the film,
the movie seems to go thin and absurdly melodramatic.

Indeed, her vengeance, coming seemingly out of nowhere—particularly since she has not even been allowed to explain her love for Jason—is so difficult to endure that, as in the final scenes of the director’s Salò, we almost feel that we must close our eyes to what we are observing, particular since Pasolini has previously made love to his beautiful star with his camera.
Perhaps, as in that Salò, Pasolini’s point here is that within every human heart there is always perversion and, finally, a monster, and trying to hold on and control the beloved is always a sort of fascist act.
Certainly, Pasolini’s own life and death gave credence to that fact, as his “acquisition” of a young handsome man led to the boy turning on him and murdering the director. One might almost read Medea today as a prescient vision of what love spurned can lead to.


Posted by greenintegerblog at 7:59 AM