any day now
by Douglas Messerli

Ronald Harwood (screenplay, based on the autobiography by Władysław Szpilman), Roman Polanski (director) The Pianist / 2002

As anyone who has read My Year volumes knows, I am a big champion of coincidence. Immediately after reading and writing about a totally unrelated film, a piece which I titled “Rabelais Rewrites Robinson Crusoe,” I determined to watch, for no connected reason, the 2001 Roman Polanski film, The Pianist, based on an autobiographical work by the great Polish pianist Władysław Szpilman, who—I hadn’t known previously—was described as one of the central Robinson Crusoes of Warsaw, Jewish men and women who after the 1944 Warsaw Ghetto Uprising chose to remain in their home city until the entry of the Red Army in January 1945, hiding out in bombed-out basements and hiding spots they’d previously established. 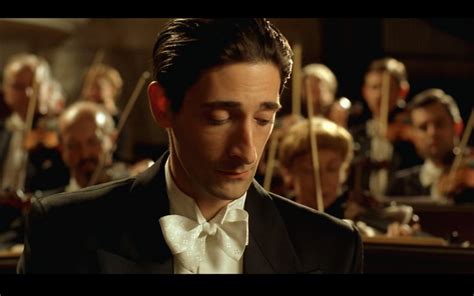 Many of these people died of starvation or were discovered by the Nazis and murdered. But somehow Szpilman survived, in part because one of Jewish kapos—men who often worked with the Nazis in order to carry out their policies—knew of Szpilman’s genius and pulled him out a line in which the pianist waited with his family to be taken to the Treblinka concentration camp, where Szpilman’s mother was killed. After months of growing abuse of his family and other Jews throughout the city, this might have been described as the most awful event of what he’d had to endure, since it took him from his beloved father and mother, his sister Halina (Jessica Kate Meyer) and his radically-inclined and quite cynical brother, Henryk (Ed Stoppard)—the only one who apparently actually perceived the truth.
Nonetheless, the kapo does save the musical genius, and one of the powerful understatements of Polanski’s film is how a few gentile Poles and even Germans were not simply monsters but helped these Crusoes to survive.

Particularly, in this work, a beautiful Pole, Dorota (Emilia Fox) and her husband (Valentine Pelka) help to hide Szpilman. Even the dreadful Nazi captain, Wilm Hosenfeld (Thomas Kretschmann)—out of far more selfish reasons—hides the great interpreter of Chopin in his attic, if only from time to time luring him downstairs to play Hosenfeld’s grand piano.
The film also does not blink at demonstrating that some of Warsaw’s Jewish Ghetto folk were sometimes as venal as the Poles and Germans, using hidden monies to bribe guards and allow secretive deliveries of food and money, often at the expense of the smugglers, young boys and others who, for a few coins, endangered their own lives. One of the most painful moments in the film is when a male child, after having delivered just such a package is pulled into a basement by his legs, with Szpilman, observing what has happened, attempting to retrieve the kid by pulling him up and out. The result of the tug-of-war which only ends in the boy’s death.
In another scene revealing the differences between the Ghetto residents, a man, counting coins at a restaurant table in a bar wherein Szpilman has been allowed to perform, demands the pianist temporarily stop his playing so that he might carefully listen to the sound each gold coin makes as it hits the table, in order to determine whether they are real or counterfeit. 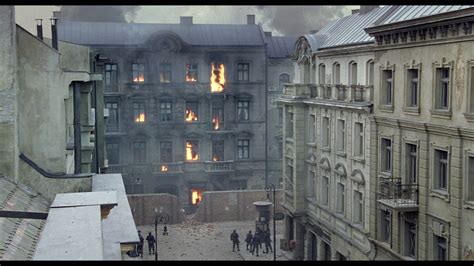 These scenes help establish the honesty of Polanski’s work, which more thoroughly documents the total naiveté of the assimilated Jews of Warsaw, fairly well-to-do families (such as the Szpilmans) or middleclass figures, who when the Nazis first took over the city, believed the English, Russian, and, perhaps, even American forces would immediately come to their rescue. “Any day now,” seems almost to be their general mantra. The pianist himself (wonderfully performed by Adrien Brody), cannot even recognize that he is truly in danger, attempting to perform the entire of his Polish Radio performance as bombs tear through the studio.
If he survives with only a moderate face-wound, the rest of his family members are ready to relocate to another Polish city until they intercept a British broadcast proclaiming it will come to the support of the Polish cause.
Yet it takes only a few days until they are forced to wear armbands, and by the time that Szpilman re-encounters Dorota—who has attempted to visit him, in total admiration for his music, on the day of the Nazi attack—he can no longer enter one of his favorite cafés, is not permitted walk in the park with her, or even sit on a nearby bench. If she is outraged, he and his family have had already to assimilate these facts into their lives. He can only stand on the street and discretely talk; an elderly Jewish man is told by an SS soldier that he can only walk in the gutter.
A neighbor’s apartment is suddenly attacked by Nazi Gestapo members, and a group of dining family members suddenly exterminated in front of their and their neighbor’s eyes, all in the darkness of their rooms in which they have protectively turned off the lights.
Even when they are located to the Warsaw Ghetto, his mother proclaims: “Well it’s better than I might have imagined it to be.” Little by little, the Ghetto citizens saw their lives diminish and curtailed that even they couldn’t quite imagine what was happening. And that, so Polanski seems to suggest, is what occurs when blind hate meets up with a world of belief. The believers insist upon their belief, their hopes, their possible dreams, while the haters take advantage of their innocence, their faith in the future, cutting them off from life. 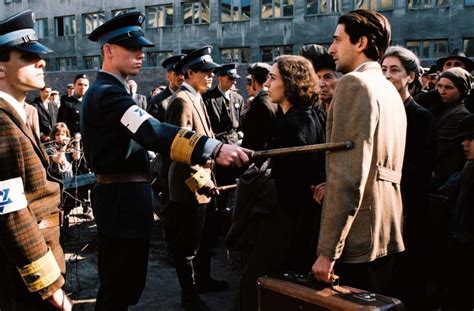 These good and not-so-good humans, the citizens of the Warsaw Ghetto—who ultimately did attempt to stand up for their own humanity against the horrors they were daily encountering—were already dead before they might even imagine what it was they needed to fight against. These men and women were not weaklings—in fact, they were quite strong in their instincts for survival and their determination to fight the injustices they encountered—but the only survivors, as Szpilman and Polanski seem to suggest, were those who didn’t speak out, didn’t attempt to go to war with their oppressors. They hid, playing out their lives much like this pianist who is not allowed even to express his own talents. The piano must be kept silent, just as it’s master must hide his face, abandon his own ideals, remove himself from the world he once loved.

The Holocaust took all these people away from our world, packing their lives away into small suitcases and, today, museums of memory. The rich world of ideas, feelings, everyday emotions, just simple pleasures were wiped away, for utterly no reason other than fear and hate, from the planet.
It is quite clear that, despite what anyone might think of Polanski, this is his second-greatest movie, perhaps even his best, although I dearly love his first film, And very few directors have even been more able to show the terrors of what it means to try to love in a world that doesn’t want to permit it.
It’s strange, now I think of it: wasn’t that really the theme of the other “Robinson Crusoe” film I reviewed just yesterday, the crazy Swiss Army Man? And isn’t Polanski’s film just as surreal?
If you’re starving and discover a can of pickled cucumbers which you hug to yourself while wandering a totally devastated landscape, how might you ever go back to Chopin again? Could Crusoe ever return to civilization after having encountered a world of “Fridays?”

Posted by greenintegerblog at 9:31 AM