Paul Osborn (screenwriter, based on the novel by John Steinbeck), Elia Kaza (director) East of Eden, 1955

It had been decades since I last watched East of Eden, and I wouldn’t probably have watched it the other day had it not been that I found little of interest on the live stream of Netflix that I hadn’t already seen. I’ve never been a great fan of Steinbeck (although I do love the movie version of his The Grapes of Wrath). Screenwriter Paul Osborn, moreover—although having written one of my favorite stage plays, Morning’s at Seven—is better known for his overwrought and/or sentimental adaptations of works such Wild River, Sayonara, Point of No Return, and his own The World of Suzie Wong. As a young man I saw all these films in the movie theaters, and even back then felt that they were sexist and somewhat racist.

I recalled East of Eden, furthermore, as an angst-driven drama wherein the young “hero,” Caleb Trask (James Dean), spends most of the time pouting as the black sheep outsider of his family, which includes his far-too-righteous and religious thumping father, Adam (Raymond Massey), and his “goodie-two-shoes” brother Aron (Richard Davalos), along with Aron’s fiancée Abra Bacon (the wonderful Julie Harris).
The film’s melodramatic feeling is also supported by a score, complete with an overture by  Leonard Rosenman, hinting at the work’s operatic qualities. Actually, I think this work would make a wonderful opera and hope some younger experimental composer will take up the challenge.
Like many of the 1950s films, it seemed far too melodramatic for what the narrative provided, in this case a thinly veiled updating of the biblical Cain and Abel story.  Even this time around, after having much more sympathy for the seemingly outcast Cal and even more pleasure in simply watching the beautiful Dean perform the role, I still couldn’t quite believe in his tears and poundings—although this time he reminded me more of myself at his age, faced with feelings of frustration and helplessness.
But my mother was a saint compared with the would-be murderess (Jo Van Fleet, who reportedly shot her husband before running off from their home and leaving her two boys to be raised by Adam alone) now a madame of not one but two houses of prostitution in the outskirts of Monterey Bay, a short ways from where Cal has grown up in Salinas. Obviously, she was not a happy woman in Adam’s would-be Edenic home. We get a wonderful sense of this from the local sheriff played by Burl Ives.
Looking back on it, living with a hard-working housekeeper and a kind and generous father, my life was the real melodrama of my own making. Perhaps it is just that Dean, a feast for the eyes, had not yet found how to act with any great subtlety. Kazan’s direction and Osborn’s script certainly gave him a great deal of slack.

Some of these acting “ticks” were quite brilliant, as when, forced to read a Bible passage about guilt and forgiveness, Cal names the passage numbers again and again, even when told by his father to leave them out of his recitation. And his slumping stalk of his prostitute mother is absolutely perfect. Despite the delirious hoots of one of Kate’s prostitutes—she shouts out “Hey, Pretty Boy,” a standard description of gay boys throughout history—Cal is too shy and intimidated to actually visit his mother and discover the truth.
On his return home, he uses his sweater almost as a kind of shroud to protect himself what he knows is reality. And, later, his first illicit kiss with Abra—who has previously been terrified of the younger boy and now, discovering his personal dilemmas, almost falls in love with him—is beautiful, as Dean reveals a kid who simply wants to please, to become a kind of blessed figure as his brother is to his father and his fiancée.

Yet, he and we know he is not blessed, nor will he ever be, even after his father’s projected business—shipping refrigerated vegetables for the West to the East—bankrupts him, and Cal, raising beans with a loan from his estranged mother, makes back the money. For one moment, knowing that he has finally become a successful farmer, Dean dances through the bean fields in a kind of manic whoop of victory. But Adam finds the money, gained from profiting on the nation’s needs of World War I, to be ill-gotten and rejects it. The gift he planned for his father’s birthday is utterly rejected, while Aron’s sudden announcement that he is marrying Abra receives the beneficent joy of the elder.
It is not, as Cal believes, that he is truly bad, simply that, in his father’s eyes, he, reminded of his once-beautiful mother, cannot accept him. And, in this sense, he has ousted Cal from any possibility of normality. It used to be thought that parental relationships had a great deal to do with homosexuality and lesbianism. Perhaps they do play a part, although it is now pretty evident that one is simply born with another sexual inclination. But if there ever was any truth to this Freudian concept, it is clear that Adam has turned his son not just into an “outsider,” but a pretty boy, someone who cannot be with women, since they will always remind him of his “evil” mother—and his societally evil self.
The rumors of Dean’s homosexual relationships are extensive, and it has become apparent that, if not truly gay, he bedded down with many homosexual men, perhaps including Marlon Brando and Rock Hudson. Many other gays have claimed to have sex with him, imaginary or real. 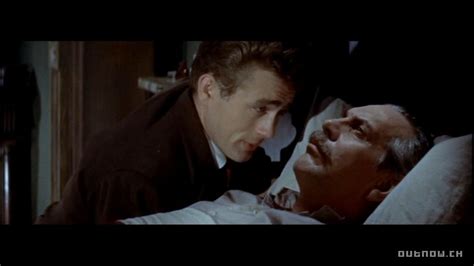 Kazan’s film does not outwardly express this, but in my reading this Cain is damned only because of his special beauty and his inability to live within the organized society his father demands. In Steinbeck’s work Cal kills his brother not with a stone or a knife but by luring him, like a kind of male Eve, to visit their mother, forcing his brother to face a truth has been unable to conceive. One might almost imagine such an act to carry with it some justice; but it is, in fact, an act of vengeance for Cal’s inability to join what his society determines is the natural course of maturation. Cal is still a troubled child who may never be able to define what it means to be a male adult in his world.
In reaction, Aron rushes off to war where, he can only imagine, he will die, forcing Cal to be even more of an outcast to this society.
The original and the film attempt to ameliorate this possibility by employing a truly sentimental trope: Abra pleading with the now dying Adam to allow his son entry into his love. Adam dismisses his nurse (an uncredited Barbara Baxley) to allow his son to attend to his dying.
This was precisely the role I played during my father’s death, I the bad boy who had come home to care for the grand patriarch (see My Year 2002). Even if Abra remains to share her love for Cal, we sense that Cal, given what he has done to his brother, will never truly be able to accept it. He is now a wounded figure, a boy begging, far too late, for his father’s reluctant love.


Posted by greenintegerblog at 9:42 AM