swimming back to life

For either budgetary reasons or, perhaps, the sudden hiring of a gay programming wizard fresh out of India, Neflix (god bless them) have suddenly issued on the live-streaming venue several new gay Indian films, movies that got made despite the restrictions of Indian censors and, even more importantly, the homophobic aspects of that culture.
Onir’s My Brother…Nikhil, the earliest of 3 films I saw in the past few days (from 2005), is surely the most emotionally wrought and the harshest in its critical evaluation of India’s anti-LGBTQ attitudes. For in this film, a strapping young champion swimmer suddenly is diagnosed with an HIV infection and thrown into the nightmare of early (late 1980s and early 1990s) hysteria about what people then described as the “gay” disease.
Nikhil, although asked whether or not he has been having sex with women prostitutes, is also almost immediately accused of being a homosexual. He secretly is gay, an Indian reality that is explored in all of the three films I saw. Being closeted is also terribly destructive in this culture. 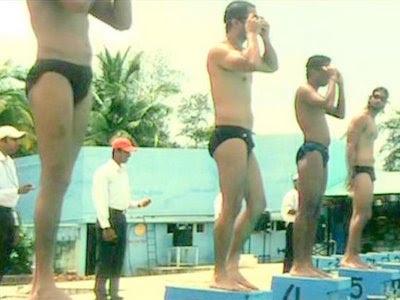 Not only is Nikhil Kapoor (Sanjay Suri) immediately isolated from his former swimming colleagues (when he attempts to return the pool all others immediately remove themselves from the water), but he is virtually arrested, taken away from any contact from his family, his father Navin (Victor Banerjee) and his loving mother Anita (Lilette Debey), and is thrown into a lockdown rat-infested room with no proper necessities. Goa, where this movie takes place, represents the capitalist tendencies of its former Portuguese rulers. Here Nikhil is not even permitted a phone call to his now-alienated family.
Fortunately, in this film, Nikhil has three individuals who care enough to find him and seek for his recovery back into the society: his handsome lover Nigel D’Costa (Purab Kohli), his beloved sister Anamika (Juhi Chawla), and her boyfriend, Sam Fernandez (Gautam Kapoor), who hire a lawyer to release him from the horrible imprisonment and work to help make people perceive that AIDS is not an outwardly communicable or a singularly gay disease.

The pain of this almost complete isolation from the lovely world in which he has grown up—in a beautiful Goa home with a loving family around him—makes it quite clear how almost anyone in this period, suddenly diagnosed as HIV-positive, was shaken from everything he or she had previously known, the ability to be who they had been, the ability to love, and, most importantly, the inability to be loved. Fortunately, Nikhil has the trio of individuals who fight for him, despite the fact that both he and they know it is a terrible downhill battle. Even the lawyer warns them of the ostracization they will surely face.
It’s odd (one of my ongoing coincidences) that the day before I had seen Kurosawa’s 1946 film No Regrets for Our Youth, in which an entire family was similarly rejected because a son, opposing the rise of Fascism, was accused as being a spy. That film was based on a true story, as was this one, recalling the life of Dominic d'Souza. But Onir was forced by Indian censors to disclaim the reality of the work simply so that he might get this movie approved.
Perhaps the history of the film is even worse than what that film depicts. But it is, nevertheless, a brave project, although often sentimental, that reveals what happened the earliest of AIDS victims.
Onir, quite brilliantly, turns his film into a direct encounter with its audiences by having the characters speaking, quite often, directly to camera, recounting their own memories and, most importantly, their regrets for not having acted more forcibly to help create the changes needed to accept their loved ones. The statements of Nikhail’s mother, wherein she recognizes how she should have spoken out against her husband’s prejudices, are particularly moving.
What can any of us say? In those days, the 1990s and even earlier, the entire culture didn’t know what to do with those who suddenly were dying and wasting away, who were marked by terrible bruises on their faces, welts across their bodies, stomachs that no longer could allow them sustenance.
At least in this Bollywood version, there is a lot of plaintive singing, a longing to be whole again, an empty desire to rejoin the society from which they have almost inexplicably been ousted.
Fortunately, as in Tony Kushner’s great duo of dramas, Nikhail has angels—lover, sister, friend—to help carry him into the next world.
Onir clearly was influenced by Kushner’s work, but his version of it is so specifically Indian, with its overlayers of years of colonial Goa rule, that Roy Cohn seems like a slight distraction. Goa is this film, is Cuba, imprisoning its gay-infected inhabitants. This is Russia, who proclaimed again and again that AIDS was not occurring in that country (after all, gay sexuality had been banned). This is Reagan territory. It is about people who didn’t want to admit that a whole new world had become infected, simply through the act of the most beautiful joy possible, sex.


Posted by greenintegerblog at 9:57 AM