The other day I was delighted to discover that Netflix is now streaming Orson Welles’ 1946 film, The Stranger, a film I had never before seen. I quickly sat down to watch it.
Although this film is often dismissed since Welles, anxious to be able to direct a new film after 4 years of silence, made a sort of devil’s pact with the producer, Sam Spiegel, and the studio, promising to produce it on schedule and allowing for the numerous deep cuts that his overseers demanded. The ruminations and philosophical conundrums of his previous films he promised to resist. And, indeed this film was a true money-maker, one of the very few of Welles’ checkered career. 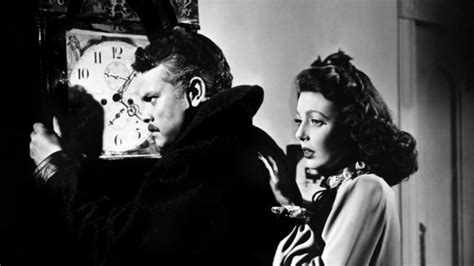 Since this movie is set in a small Connecticut town where evil has been installed in the form of a seemingly well-respected teacher in the town’s all-boys’ school, the work is sometimes compared with Hitchcock’s Shadow of a Doubt. However, in Welles’ original there was a long sequence is South America which I would have loved to have glimpsed to help contextualize those parallels.
Moreover, despite the film’s homey qualities, enhanced by the beautiful Loretta Young, playing Mary Longstreet—daughter of Supreme Court Justice Adam Longstreet—who is about to marry the hidden Nazi in their midst, Franz Kindler (played by Welles himself), Welles’ film is a far darker noir than Hitchcock’s wonderful work. Hitchcock’s creepy Uncle Charlie, after all, has murdered only a few elderly women for their money, while Kindler has evidently been responsible for the death of thousands or even millions of Jews and during the course of the film kills the first of the strangers to

arrive in the town of Harper, a former colleague, Konrad Meinike (Konstantin Shayne) who has purposely been allowed to escape from prison so that he might possibly lead authorities to Kindler (now living under the name of Charles Rankin). We never quite learn why the highly nervous Meinike, now a born-again Christian, wants even to meet with his former associate—perhaps simply to try to convert him—but the visit, during which he leaves his suitcase at the local drugstore, which seems to be the heart and soul of Harper, quickly results in Kindler-Rankin strangling him, presumably because he realizes the reason behind Meinike’s miraculous “escape” and is terrified that some of his students, racing through the woods on a “paper chase,” have spotted the suspicious looking outsider.
The second, and more predominant stranger come to town is the US Wartimes Commissioner, Mr. Wilson (Edward G. Robinson), who has followed Meinike to that small village but, since his target has attempted to kill him as he enters Rankin’s school, has no clue to what the former Nazi, now teacher, looks like or knows anything about his current identity. All he knows is that the ex-Nazi has an extraordinary interest in clocks, which, obviously, echoes the lecture of Welles’ villain in The Third Man about the Swiss gift to the world of “cuckoo clocks.” Welles wanted Robinson’s role to be played by his long-time friend, Agnes Moorhead; it might have been a brilliant coup to have a feminist sleuth, but it was not to be.
Despite all the limitations with which the producer and editor presented him—Welles described editor Ernest J. Nims as “the great supercutter, who believed that nothing should be in a movie that did not advance the story. And since most of the good stuff in my movies doesn't advance the story at all, you can imagine what a nemesis he was to me."—the director got the upper hand by inserting long discussions between Wilson and the local, laid-back druggist, Potter (the ex-burlesque actor Billy House) while the two play checkers as they attempt to check out one another, Wilson and Potter struggling to eke out as much information from the other as they might.

Wilson loses the first round but later, paying the 25 cent fee, receives more information than he reveals, discovering the local church in the town square contains a large Habrecht-style clock mechanism, which Rankin is attempting to repair as part of his hobby.
But even when Wilson realizes he has found his man, he needs the testament of Rankin’s new wife, Mary—or at least her recognition that she is living with a man who opposes all of the values which her family has believed in. Another cut scene revealed the long patriotic military history of the Longstreet’s through a tour through the local cemetery.
Yet Welles, always the clever dodger, tells this part of the story through a bizarre combination of the wonderfully evocative score by composer Bronisław Kaper, with images right out of Fritz Lang’s M (menacing shadows overlaying the images of the town’s innocents), through the murder of Mary’s dear dog, Red, and the help of her wised-up brother, Noah (Richard Long), who, along with a sawed-off staircase (straight out of Shadow of a Doubt) incriminates and finally destroys—in a scene that might have come straight out of Charles Dickens’ Oliver Twist—Rankin/Kindler, allowing our villain to suffer the justice that the Nuremberg Trials could not provide.
This isn’t Citizen Kane or (without the last scene) the brilliant The Magnificent Ambersons, but it comes close, at moments, to revealing the great director’s genius. And I’ll watch it any day over so many other less challenging movies of its genre—whether it be noir or Nazi conspiracy tales.


Posted by greenintegerblog at 9:42 AM