the right person in the wrong place
by Douglas Messerli

The 2013 Indian film The Lunchbox is a likeable film that grew out of an idea of director Ritesh Batra to do a documentary on the famous lunchbox delivery system of Mumbai, where lunches, cooked by wives and restaurants, are regularly delivered just before lunch by dabbawala, highly efficient street-runners who deliver up the lunches to office workers throughout the city. 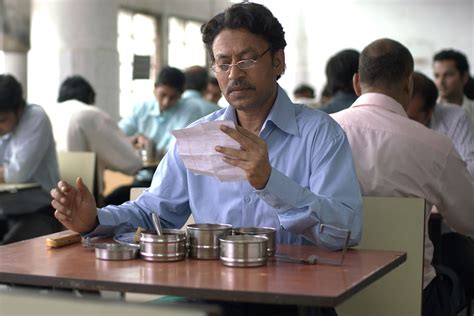 Spending time with the dabbawala, however, Batra began to hear tales and personal stories that, apparently recounted errors and mistakes in the system, which helped the director reconceive his tale in the form of an epistolary cinema, in which one morning, suddenly without explanation, a senior worker, Saajan Fernadez (Irrfan Khan), a widower about to retire, is delivered the wrong food. Instead of the standard cauliflower-based, over-salted cooking of the restaurant from which orders his meals, he receives a deliciously-flavored series of dishes cooked by a young married woman, Ila (the beautiful Nimrat Kaur). Ila and her husband, incidentally, are not getting on so well, even though they share a young daughter, and when the pack of lunch dishes is returned completely licked clean, and Ila’s husband describes his lunch as “good enough,” she realizes that her special lunch—concocted with special ingredients and suggestions by Ila’s aunt, who lives above them—has gone astray.
The next morning, after cooking an even more special lunch, she adds a note, explaining the mixup, and thus begins a series of short letters, at first just filled with bits of information and advice, but gradually opening up, particularly in the case of Ila, to reveal aspects of personal life. Before each of them know it, their daily correspondence has grown into a kind of intimate conversation, in which Saajan reveals his loneliness, as Ila admits that it appears that her husband, Rajiv (Nakul Vaid) is having an affair. 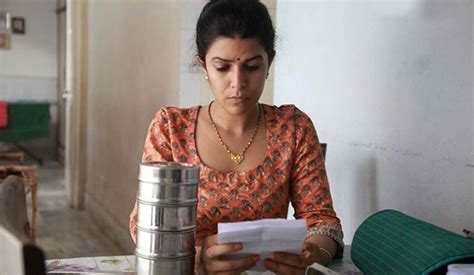 To reiterate the changes going on in the mind of the less loquacious Saajan, the writers and director introduce a likeable if inept future replacement for Saajan and his job, a young man Shaikh (Nawazuddin Siddiqui) who is ready to please his trainer and in love with a young woman whom he is about to marry. He is also a good cook. Yet, at first, Saajan entirely ignores him, refusing to teach him or train him in the job. After a few days, however, Skaikh’s eager face and Saajan’s increasing pleasure and even slightly exciting sexual correspondence, opens him up to actually listen (in both Hindu and English) to the young man’s hopes and own joy of life. Bit by bit, he allows Skaikh to take over some of his duties—all of which ends disastrously, when it is discovered that, after long years of spotless bookkeeping, the files have gone terribly awry. Refusing to blame Skaikh, however, Saajan corrects the books and even accepts the orphan Skaikh’s request to stand as his witness in Skaikh’s marriage to his young lover.
As Ila’s hospitalized father dies, and her husband continues to distance herself from her, the epistolary relationship between her secret food lover and her becomes even more important in her life, and, finally, she requests to meet him in one of her favorite restaurants. Sadly, Saajan fails to show up, and the next morning she sends him am empty food box which, when returned that afternoon, explains that he had, indeed, been there, but that, when he saw the beautiful young woman before him, he realized that as an older man closing down his life, it would be wrong to continue such an illicit relationship. The tender missles of Ila had deluded him into believing, for a short while, that he was young again.
Determining to meet him, nonetheless, Ila drills the dabbawala, insisting that he has been delivering to the wrong man, and tracks Saajan to his office, only to be told that he has quit his job and moved to Nashik.

In the very next scene, Saajan returns to Mumbai, now determined to seek out Ila; Ila, almost as in an O. Henry story, has, in turn, sold her jewelry and moved with her daughter to  Bhutan, a location which Saajan had previously suggested to where they might escape. Whether these two lonely and lovely souls ever do find each other, we never know. But we can presume, by the tone of this soulful “comedic” work, that neither of them will ever hook up with each other, and what might have been at first perceived as a light-hearted “mix-up” has been transformed into a serenade of lost opportunities and love.
Perhaps that most poignant aspect of Batra’s film, at least for me, is the fact that the over eager and incompetent, men and women like Shaikh and his young wife, as well as Ila’s philandering husband Rajiv, all find love and live life quite fully, while the honest, capable, and truly nurturing figures such as Ila and Saajan are left on the outside, lonely and joyless, a theme reiterated through the film as night after night, Saajan is seen quietly drinking and smoking upon his balcony as he looks down, almost like a voyeur, upon a family enjoying their joyous dinner below. Ila too, in her daily chores of cooking and washing, seems completely isolated from world around her, despite Mumbai’s busy streets, a woman, whom we fear, may turn out like her Auntie, trapped in her room by a man who stares incessantly at a ceiling fan, she forced to change his diapers. It is almost as if their competence and special gifts keep them from enjoying the fruits of their behaviors. To give freely of oneself does not mean that the world will give anything back. All one can do is to continue to true to one’s own nature, and perhaps even the recognition that someone once noticed those special qualities is all the reward one can expect. Perhaps the dabbawala, who defensively argues that there can have been no mistake in his delivery, has handed up Ila’s lunchbox to right person, after all, while putting it down in the wrong place.


Posted by greenintegerblog at 8:27 AM