when worlds collide
by Douglas Messerli

Although Hindi cinema has had several gay films, including works by director Sridhar Rangayan, this director’s most recent film, Evening Shadows, now available on Netflix, is perhaps one of the most nuanced and relevant of LGBT Indian films—particularly given the fact that it speaks contemporaneously of Section 377 of the Indian Penal Code, which criminalizes homosexual acts.
More importantly, this film, through its focus on a rather well-to-do conservative Hindu family in southern India, reveals the effects of patriarchal privilege and misogynistic behavior that underlines much of the culture.
Our point of view is through the eyes of a young gay man, Karthik (Devansh Doshi), a photographer living with his gay companion, Aman, in Mumbai; Karthik has returned home for a visit for a holy puja ceremony, which involves songs, rituals, prayers, and invocations to the god, often involving fire and special objects. It is clear Karthik does not often visit his birth home, and his mother Vasudha (Mona Ambegaonkar), particularly, is excited about her beloved son’s return.
Karthik’s father Damodar (Anant Mahadevan) is also impatient for his son’s return—but for reasons very different from those of his maltreated wife, a woman expected to do all the cooking, care for the selfish live-in aunt, and attend to all the details of the puja; he has planned the occasion to announce the arranged marriage to a local girl, Neela (Disha Thakur),with whom Karthik has grown up. It is time to come home, he announces, and find a real job in business—photography in his mind obviously not being a true “business.” 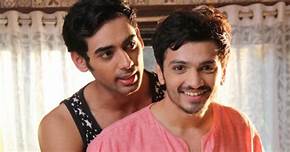 This film, in short, is a mini-version of “When Worlds Collide,” as Karthik is forced, quite gracefully, to bow out of the proposed marriage with his beautiful young neighbor, calm his anxious lover back in Mumbai (who apparently is highly involved with the politics of the Section 377 decision) and pay the attention to his loving mother that she deserves. On top of that, he has a married uncle, in the closet about his sexual identity, hotly pursuing him. He calms his ineffectual aunt by taking photographs of her which she might post on a dating web-site. This might have been pure farce, but Rangayan calmly puts the pieces together so that we can easily differentiate the loving and generous life Karthik leads in Mumbai from the conservative, over-heated, often hostile world—particularly for the women—of Karnataka.
We perceive that world, the society in which Karthik grew up, in small, carefully edited flashbacks and poignant memories. There are many lovely scenes in which the young Karthik works in the kitchen with his mother—while the father mocks their closeness—when the young boy, visiting in the “evening shadows” a local cruising place, where he encounters, unexpectedly his uncle, realizing that the man is also gay, and when he recovers a “treasure” he has buried as a young adolescent—a container with pictures of handsome young men and male movie stars. Through these artfully directed throwbacks, we come to comprehend that Karthik’s sexuality has not been a sudden awakening in the big city, but a gradual realization of who he was in a cultural backwater.
It’s odd how much Karnataka and my upbringing in Marion, Iowa have similar parallels. I had no gay uncle, and my father was never intentionally misogynistic. Yet Damodar’s utter hatred for gays and lesbians reminded me so much of my own father. Even an innocent question, as I mention elsewhere in the My Year volumes, about homosexuality before I had imagined myself as gay, brought down a torrent of wrath that I could not even assimilate. The culture that supported both had a conservative religious bond from which, like Karthik, I too had to escape in order to survive. After I met my companion, visits home also grew fewer and fewer. Although eventually loved by my parents and my grandmother, Howard seldom opted for a visit. I don’t have a cell-phone, but my intense calls to Howard during my stays must have seemed like a kind of male hysteria. 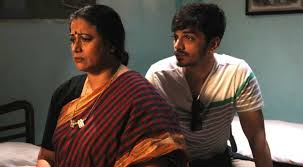 Karthik handles it all with much more calm and helps Vasudha, through a trip with her alone to Indian archeological sites at Talkad, to perceive the abuse she has had to endure. But when he finally admits to her that he is gay, she goes into temporary shock, crying, moving into silence and shunning the boy she so intensely loves.
But like many such mothers, she finally comes into a kind of acceptance, and in so doing recognizes the narrow patriarchal world in which she too has had to allow in order to love the unloving husband. When Karthik’s uncle tries to rape him, his wife enters, observing his own version of male rites. Surely their relationship, despite their children, cannot now survive.
In the empty house where Damodar rules, he accidentally uncovers pictures from his son’s computer that make it clear about Karthik’s sexuality.
Fortunately, the director does not follow that discovery. It is Karthik’s mother who will now steer the family into the acceptance of her son’s difference.
I should add that this film, at moments, with its many beautiful songs, seems almost like a Bollywood version of a tense gay drama. So much the better. We should sing of the joys of motherhood, of sexuality, of living as we all naturally should.
The shadows may remain, but evenings are filled with joy and, now perhaps, a new kind of understanding—or at least comprehension. The whispers and secret troves can now be spoken and opened for all to see. Damodar no longer rules.
With good reason, this film won several awards at queer movie festivals throughout the world.

Posted by greenintegerblog at 5:19 AM