when home is not where the heart is
by Douglas Messerli

As the reviewer Subhash K. Jha begins his piece in the Hindustan Times about the 2016 film, Dear Dad:

It takes a whole lot of guts to make a film on alternate
sexuality in India, especially when you are a first-time
director. Tanuj Bhrama has pushed the envelope out of
the closet as far as possible. And then some.

We learn almost from the very beginning of this film that the central character, Nitin Swaminathan (Arvin Swamy), married with a son and daughter, has recently come out to his wife as a gay man and that she is seeking a divorce. She, quite rightfully insists, that Nitin also explain the situation to her son, Shivum (Himanshu Sharma); so begins a road-trip drama to Mussourie and other Indian nature spots that is not so very dissimilar from the journey the gay figure of Evening Shadows takes with his mother. And, like that film, the central purpose of the trip is reveal and explain his homosexuality, which in both cases ends at first in confusion and anger before final assimilation. Yet, unlike Rangayan’s lean telling, wherein he reveals the love the hero and his friend feel for one another, Bhrama’s Dear Dad has little to do with sex—Nitin is single and apparently has no lover, nor do we get a glimpse at his sexual preferences, although he does mention that he is not attracted to “all men.”—so that the film becomes a statement of the father and son relationship more that it is a gay film.
If the movie represents, at first, Shivum as a fairly typical self-obsessed kid, far more interested in his cellphone and a “celebrity” (Aman Uppal) whom he spots at a local restaurant (requesting a signature), it suddenly shifts when the two stop by Nitin’s parents. There his overly-loving mother greets Nitin and Shivum with joy; but it is the sad empty relationship between Nitin and his dementia-inflicted father that provides deeper psychological perceptions.

While Shivum seems mostly bored in the company of his father, Nitin quickly leaves the arms of his loving mother to attend to the old man, who has been left in the yard with shaving lotion pasted across his face, apparently awaiting his daily shave from his wife. It is an almost a surreal scene, as Nitin takes up the razor—hinting at both true love and perhaps a little hate—to accomplish the task of shaving his father. During the gentle scrapes of the razor he explains, knowing the father will comprehend very little of what he is saying, that he is a gay man. The camera focusing on the older father and son, however, gradually pans away, revealing that Shivum has overheard the conversation.
Through this device, quite early in the work, Bhrama sucks almost all the expected drama out of his cinema, while for the rest of the film the focus shifts to the hurt and angered son who must suddenly come to terms with a father who he has never truly known.
The only bit of drama, other than the son’s growing angst, is provided by the fact that the duo again encounter the “celebrity” (we’re never truly told why he is famous) along the road, hitchhiking, Shivum insisting that they give him a lift, if no other reason than to put another being between the intensity of his father and him.
The two, father and “celebrity” even share a bedroom—hinting even that the easy-going and quite accepting “guest,” could have shared Nitin’s bed. Yet Bhrama does not suggest any sexual actions, and the  “celebrity” expresses a kind of standard “heterosexual trope”: “But you’re married, with kids!”  So too was the hero’s uncle in Evening Shadows.
However, it is the “celebrity” who, after Shivum has fed his father something to make him very ill, who nurtures Nitin to health again and who advises the boy that he must accept his father for who he is, admitting that he too left his father out of hatred, and hasn’t been home in 15 years. By film’s end, we recognize that his journey has been one to see his family again. 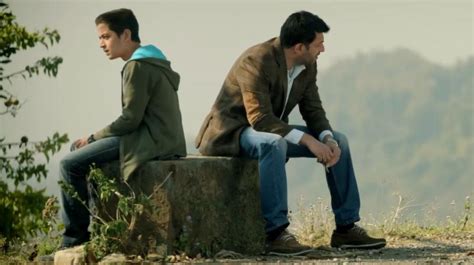 Shivum moves on to his boarding school, still harboring anger that “things can no longer be the way they were.” He, so a pop song proclaims must still grow up and “learn to fly.” Which he eventually does, winning top honors in mathematics in his school.
For the honors celebration, his mother, with her new lover (“Isn’t he a bit old?” asks Nitin; “Well at least he’s straight,” she quips. “Ouch,” is his response); but the loving Nitin, after a long emotional scrapbook of images from Shivum’s and his close relationship years earlier, does unexpectedly show up to congratulate his son, who finally is able give him the inevitable hugging forgiveness.
If this is not a great queer film, it is an important one simply because within a very homophobic culture it takes a different trajectory, exploring a married adult coming out—with all the numerous issues that decision represents—as opposed to the more common young man coming out to his parents or to himself. Yet there seems to be something missing here, particularly when Shivum asks his father, near the end of the movie, “are you going home?”

The film might truly have explored this question further. For a man who has had to abandon everyone and everything in order to no longer live a “false life,” where is home? Clearly for such an individual, “home is not where the heart is,” but in a larger world of possibility and desire. It is quite clear that for Nitin his love lies with his son and younger daughter. But his access to them will now be limited, and his ability to show that love or any love will lead to constant searching.
Yes, this is a brave film, a work that truly explores what is next in mid-life after you made a major decision to change your lies into truth. Where do you go from there, and how to obtain whatever dreams or even illusions are left?
And for those left behind, well patriarchal relationships, as this film makes clear, are always so far more difficult that matriarchal ones. Just ask Freud.