the letter my father wrote
by Douglas Messerli

Chih-Yen Hsu and Mag Hsu’s original film for Netflix, Dear Ex, spins out its tale in a rather simplistic plot, but through small complications, mostly centered around the discoveries of a young 13-year old, Chengxi (Joseph Huang), turns this film into a far more complex study in family relationships.
The movie begins with the Medea-like anger of Chengxi’s mother Sanlian (Hsieh Ying-hsuan), having just discovered that her former husband, Song Zheng Yuan (Chen Ru-shan) has died, leaving his insurance policy entirely to his gay lover, Jay (Roy Chiu) instead as she has hoped would be left to her son for his education.
Try as hard as she might, however, Chengxi, it appears, is not a great student, and is simply frustrated by all adults, particularly his shrill-voiced mother, but by his father as well who abandoned his mother before he was even born. All adults are the problem, he declares, doodling over their on-screen images in a process of teen erasure. At one point during the early battle between his mother and Jay, who unnecessarily taunts the “ex” by calling her Auntie, Chengxi seems to threaten suicide as straddles a high balcony protective barrier.
When Jay pulls him inside to safety, he determines, against his mother’s screams of horror, to abandon his own home to join Jay, who dresses in campy clothes and works as a theater director-actor. Even the boy’s escape from home, however, leads to Sanlian’s intrusions upon his life, as she shows up to make sure her boy is getting to school on time and receiving enough nutrition. While she prefers what Jay calls grass, he eats carry-in fast foods.
Even though Jay perceives that, whether he likes it or not, he is not Chengxi’s “father” or, perhaps, as he jokes, his “step-mom,” he is no more pleased in having to now be responsible for the boy than Sanlian is for Chengxi’s absence and shift of affections. To her, surely, it must appear that she has now been abandoned by both males she has loved and attempted to nurture.
Yes, as The New York Times Karen Han observed, the film often borders and melodrama and, I might add, skirts at the edge of farce. Yet, fortunately, the sparks that fly between Yuan’s ex-wife and his male lover create a kind of furnace for Chengxi, a furor of thought, in which he gradually perceives that all the adults involved, in essence, loved him and one another. 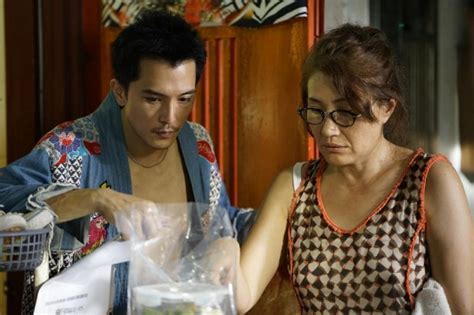 It may be a rather clumsy device to present important scenes from the past in flash-backs, none of which the young boy could possibly have observed, but it does gradually reveal his perceptions, as he discovers that his father, upon realizing, as it puts it, that he simply “loves men,” did not leave Sanlian out of anger or hatred; that Sanlian had desperately sought to keep Yuan close to her; and, most importantly, that Yuan left his insurance policy to Jay because his lover had scraped together his own funds and money he borrowed to pay for Yuan’s cancer treatments.
Despite their hate for one another, the “ex” and the lover do often function as an odd couple in their attempts to parent the troubled boy.
When, finally, Chengxi reads a letter left for him by his dead father, he is encouraged by Jay to return home, where, despite the overprotective nurturing of his mother, he will more certainly thrive than living on Jay’s couch and eating whatever fast food the man brings home for dinner.
This film, finally, is not remarkably profound. It does not answer the early angst that Chengxi feels. But we do surmise the slow revelations he has made might help him in the future. And we do realize that, if nothing else, his two parental opposites have moved ever so slightly closer.
We are not quite told what exists in that last letter he father wrote, but it is clearly a gift for the healing of the 13-year-old, a recognition that love is never simple and often leads to what others might even perceive as a kind of hate. In the end, one has to accept love on its own terms rather than what one might imagine it to be.