redemptions of matter
by Douglas Messerli

During Agnès Varda’s and Jacques Demy’s time in California, Varda made several films, but the first of them, Uncle Yanco, a documentary on her artist first cousin, Jean Varda, is one of the most  charming, while not the most profound. In a sense it’s simply a kind of love letter to her distant relative, a first cousin, then living in the Sausalito boat community of the late 1960s—a group of boat-dwellers who had rejected the increasingly heavy rents of the San Francisco Bay community in preference to the rocking rhythms of the water over more solid brick and mortar homes and apartments.
Varda had never met “Uncle Yanco,” a title she gave him given their vast differences in age; and she evidently first came to know of his existence through her fried Tom Luddy. With her crew and daughter, costume designer Rosalie, Agnès determines to visit her long lost Greek-French relative on his re-designed ferryboat in the San Francisco Bay. 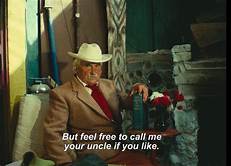 Varda’s film is a picture of an eccentric collage artist, a good cook, a man of many maxims and seemingly wise sayings (“The world is too transparent.” “Life is steeped in death” “How do we know that life isn’t death and that death isn’t life?”), and a kind of elderly guru to the large Bay-area hippie community, who each weekend he invites in a kind of flotilla of younger neighbors to cavort on his somewhat ridiculously decorated former ferry.
One might almost describe her brief documentary as a kind of celebration to the old man’s love of life. Certainly, given the Uncle Yanco buttons she and her crew wear and the plastic heart overlays she imposes over the camera as she films him, Varda quickly became immensely fond of her relative. And the movie, overall, is a sort of love-poem to the slightly curmudgeonly satyr-like cousin, who dislikes his art pieces as being described as works of collage, preferring to describe them as “redemptions of matter.” 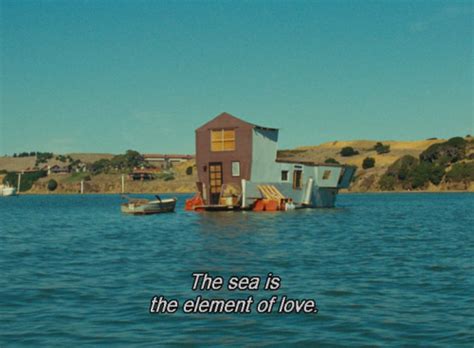 It all makes for great fun, and her work is primarily a celebration of life—one of her many such pieces.
Yet, how much richer this work might have been had she done a little research and given us a bit more context about the man she has just discovered. After all, this Varda, was not simply an old man in love with the California sun and the plashes of the Pacific Ocean. As a young man in Athens he was considered a kind of art prodigy, abandoning traditional art at the age of 19 when he moved to Paris.
During World War I he moved to London, becoming a ballet dancer and actor and making friends there with most of the British avant garde.
But after the war he returned to Paris, where he befriended Picasso, Braque, Derain, Ernst, and many others. He held regular salons, and became, through his glass-colored mosaics, a rather sought-after artist.
In the 1920s he spent much of his time Cassis, in southern France, sharing artist Roland Penrose’s home, the Villa les Mimosas, where together they celebrated noted artists and other guests.
In the 1940s he moved to Big Sur, California and later to Monterey, where in 1943 he persuaded Henry Miller to join him. Again, he opened his home to regular salons, at one of which Miller met Anaïs Nin, whose novel Collages portrayed Varda fictionally.
In the late 1940s Varda taught a summer institute course at Black Mountain College and, later, at the California Institute of Arts.
For years Jean Varda lived on his jerrybuilt floating home with artist Gordon Onslow Ford before Zen Buddhist popularizer Alan Watts took over his studio.
So, our dear “oncle” was a rather remarkable figure and perhaps deserves a somewhat more historical perspective. But if nothing else we see this fun-loving being through the eyes of his younger cousin enjoying him simply through her unknowing eyes.