Douglas Sirk | Written on the Wind

the good and the bad
by Douglas Messerli

George Zuckerman (screenplay, based on a novel by Robert Wilder), Douglas Sirk (director) Written on the Wind / 1956

The melodramas of Douglas Sirk are nearly always overwrought statements of human behavior with dramatically lit, color images to match. But none of his films is quite as theatrically conceived as his 1956 film Written on the Wind, which begins with Kyle Hadley (Robert Stack), speeding to his mansion in an Allard J2X before angrily opening the front door, with a whirlwind of leaves sweeping into the house as he himself storms up the stairs to shoot either his wife, Lucy Moore Hadley (Laureen Bacall) or his best friend and hinted lover, Mitch Wayne (Rock Hudson), whom Kyle believes is the father of the child with which his wife is now pregnant. 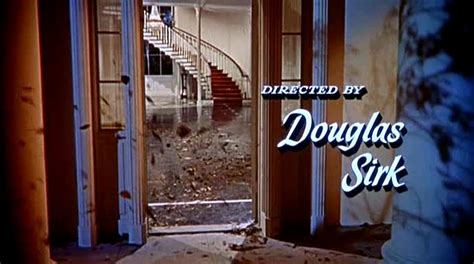 A rather cheesy song, written by Sammy Cahn and Victor Young, and sung by The Four Aces
follows as the calendar pages spin backward, presumably themselves wind-driven as well, to take us into the past when Mitch first met secretary-designer Lucy and was “be-smitten” with her on first sight. If that word sounds horribly archaic, it is nonetheless appropriate for “gee-gosh” attitude with which Hudson plays his role.
Instead of immediately rushing off with her, which any hot-blooded male such as Humphrey Bogart might do, Hudson carries her off, like a cat bringing home its prey, to his “true” love, the playboy alcoholic Kyle, who speeds away with the flummoxed good girl in a taxi. A quick plane ride raises her spirits enough that she almost immediately determines to spend the rest of her life saving this ne’er-do-well, a role the good-natured, hard-working Mitch has evidently attempted to play for most of his life. The question: is he mad that Lucy has taken Kyle away from him or that that Kyle has stolen off with Lucy?

Once we meet Kyle’s even more self-destructive sister, Marylee (Dorothy Malone)—an alcoholic also and nymphomaniac to boot—we realize, if he can simply allow himself to see beyond the forests of highly serious dramatic postures, the viewer realizes he’s now in for good fun in this quite evident mid-century acting out of good and evil.
In this case the evil folk actually win. Stack as the tortured rich boy, son of oil tycoon Jasper Hadley (Robert Keith)—who clearly would have preferred Mitch as his son—does a rather excellent job of acting, and his evil sister, jealously in love with the impassive Mitch who does his best to ignore her, won an Oscar for her supporting role.
Hudson and Bacall, the good folks, mostly attempt to ooze their goodness into Hadley’s ugly world (stuffed with oil derricks and scruffy patches of land in-between) without much success. Hudson beats up Marylee’s down-home would-be boyfriends, stands face-forward with his impressive male torso, and smiles his most toothy grin. Bacall shows off her legs and deep-throated purring’s; but neither does much good. The evil ones get all the fun, and all the alcohol, and all the lies they desire. An old grumpy doctor is even capable of convincing Kyle that he is impotent, just as Kyle’s father has convinced his son of the boy’s utter incompetence. This is pure Freudian stuff.
I’ve always loved, and have commented elsewhere, how screenwriters—in this case, George Zuckerman based on a book by Robert Wilder—often subtly, and sometimes so subtly, work in the sexual realities of their actors, particularly in the case of Cary Grant and Rock Hudson. Zukerman provides us some absolute zingers which I am sure flew right over the heads of most of the theater-goers of the day. At one point, when old man Hadley suggests the ruggedly handsome Mitch should get married, Hudson’s character replies: “No….I have enough trouble finding oil.” He later begs 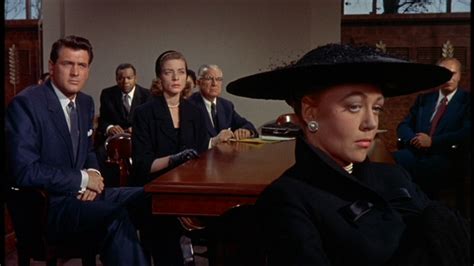 Marylee: “Please don’t waste your life waiting for me.”
What he seeks from his women is clearly “decency,” and when, entering the suite into which Kyle has ensconced his new love, Mitch calls out, again and again, “Lucy, are you decent?” Only to discover she is so decent that she has escaped the place.
When the circle turns (and the merry-go-round theme is established early in this film), and we, near the end of the movie, come back to the opening scene, it is Mitch who is nursing the suffering Lucy, and it is Marylee who shoots her brother dead. Particularly after the trial redeeming Mitch from killing his dear friend, the good couple, Mitch and Lucy, are now given an open field to express what should be their love. Yet Sirk, like a silent Buddha, gives us no clue of what might happen in the future. And we can guess that Mitch may indeed speed off to Iran, which he has been threatening to do throughout the film, to discover some Arabic lover, or, at the very least, some lost male—just as Marylee has proclaimed her youthful afternoons with him as “wonderful lost afternoons”—to whom he might express his affection. Lucy is far too sexy for him. And she, having had a miscarriage, is now perhaps far too smart to start all over again, despite the circular structure of the plot.
In Sirk’s melodrama, both remain utter innocents (as Marylee cattily proclaims early in the film, “I’ll loan some time of my towels since you seem to still be wet behind the ears.”) who haven’t a clue of how to get under the sheets without the evil ones’ attempts to bed them. Lucy will perhaps always be seeking another man to “save”—after all, as she herself recognizes, she is so very capable—and Mitch is seeking something similar, a man who needs him as a partner for life.
If there was ever a gay drama in a sheep’s skin, Sirk’s Written on the Wind is it. No wonder Fassbinder loved this film so dearly.


Posted by greenintegerblog at 9:44 AM