Martin Scorsese | The Age of Innocence

checks and balances
by Douglas Messerli

When I originally saw this 1993 film, directed by Martin Scorsese, it somehow irritated me for its continual interruption of the action with long narrational voice-overs spoken by Joanne Woodward, and the bland passivity of two of the central characters Newland Archer (Daniel-Day Lewis) and May Welland (Winona Ryder).
My feelings, if I recall, were somewhat similar to those of critic Marc Savlov, who wrote in the Austin Chronicle:

At two hours and 13 minutes, Scorsese has allowed
himself enough time to follow Wharton's book to the
letter, and also enough time to include long stretches of
painfully wearisome society functions and banter. As
a period piece, it's a joy to behold, but with such an
indecisive little newt of a protagonist, it's just hard to
give a damn what happens. 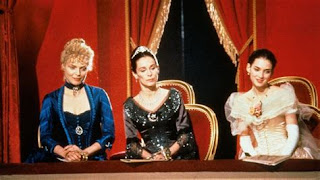 Actually all three of the work’s major characters, including the intriguing Countess Ellen Olenska (Michelle Pfeiffer), who after all seems to be leading Newland on before she rushes off to live in Paris, might be described as “indecisive little newts.”
Perhaps the problem is that in Edith Wharton’s grand New York societal satire, no one gets what they truly want. Good manners and cultural pretensions in New York’s 1870s high society demand constant checks and balances. And for a street-smart director like Scorsese, whose characters generally push right past all rigid boundaries, the result in The Age of Innocence is a kind a claustrophobic tamping down of the director’s usually raucous energies. 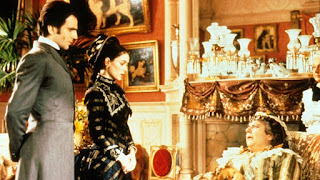 Only Mrs. Mingott (the hilarious Miriam Margolyes), surrounded by her beloved dogs, seems to have any fun. Archer’s son Ted (Robert Sean Leonard), moreover, seems to the only honest one, insisting his father, in his old age, pay a final visit to Ellen Olenska.
But this watching the movie, I allowed myself the opportunity to simply sit back and enjoy the film’s not inconsiderable pleasures: the beautiful opening credits by Elaine and Saul Bass, the lovely film score by Elmer Bernstein, and the picture-perfect sets by Dante Ferretti, Robert J. Franko, and Amy Marshall. 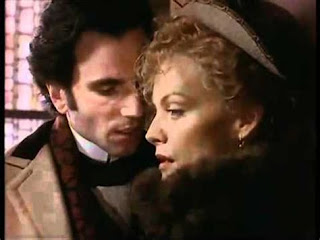 Day-Lewis, nearly always an excellent actor, even holding in obeyance his theatrical talents, still makes for a handsome and likeable Newland, and the beautiful Pfeiffer gets, this time round, to be a little wicked and sassy. Ryder makes for a perfectly pretty if boring May, although the scene in which she announces her first pregnancy to Archer is excellent: after he has threatened to wonder off to Europe she drops the news, realizing that she has finally netted and trapped him—perhaps the cause for the confession to her son Ted on her death bed that she had asked him to give up what we loved most, and that he had for her sake. It’s the one clue that perhaps she wasn’t so very innocent after all.

Michael Ballhaus’ cinematography (he’s worked several times Scorsese and in Germany with Fassbinder) was nominated for awards—and should have won. Gabriella Pescucci won an Academy Award for his costumes.

Yet, for all its picture-pleasing moments, this film still seems staid, a bit like a fragile glass snow cone ornament, the kind that used to hang from Christmas trees. And I’d take Scorsese’s raunchy version of The Wizard of Oz, After Hours (with cinematography also by Ballhaus) over this film any day.

Posted by greenintegerblog at 7:43 AM