the day the nazis came to hudson bay
by Douglas Messerli

Yesterday for the first time I saw Michael Powell’s 1941 war propaganda film, 49th Parallel, a work aimed at encouraging the then neutral United States to enter World War II. Oddly, the German attack that Powell and screenplay writer Emeric Pressburger imagine is not on US soil, but on our neighbor to the north, Canada. 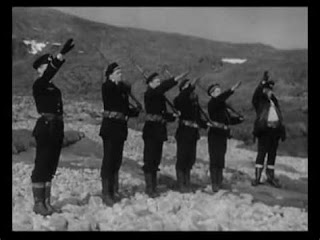 It’s more than a little ironic—given our current president’s mania about walls between countries—that their film begins with a statement describing the US-Canada border as the “only undefended frontier in the world,” establishing from the beginning that if a small band of German “invaders” (the movie was titled The Invaders when it was released in the US) are willing to attack Canada, they might certainly choose to do the same to its neighbor to the south. 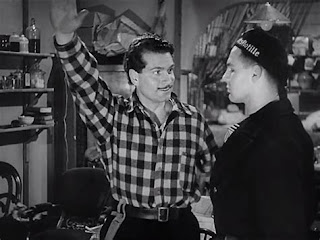 Although this small band of Hitler’s henchmen, led by Kommandant Bernsdorff (Richard George) and Lieutenant Hirth (Eric Portman), kill plenty of civilians (11 in all) and wreak havoc wherever they go, Powell and Pressburger also turn them into a kind of comic team, determined to take control of a small outpost on the Hudson Bay, where they are attacked by indigenous Eskimos and the harsh weather; and, even more absurdly—in the instance of the youngest of their party, Jahner (Basil Appleby)—are sexually lured with a couple of winks by Johnny, the Trapper (marvelously portrayed by the real-life bisexual Laurence Olivier), who has just returned to the outpost after months of isolation. Is it any wonder he is one of the first shot and spends most of the rest of his role in the film dying in bed holding a rosary?

After a shoot-out with the native Eskimos, these U-Boat travelers attempt to highjack a small water plane, which they cannot get into the air, being forced to jettison most of their weapons and one of their men, who as he tosses away the rifles is shot by a member of the Inuit. Another of their leaders Lieutenant Kuhnecke (Raymond Lovell) is killed when the small bi-plane runs out of fuel and crashes into a Manitoba lake. 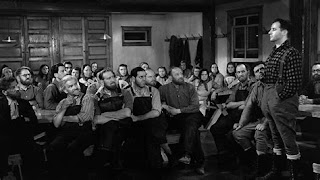 The remaining few stumble across a Canadian Hutterite colony, a group of Anabaptist believers, many of whom had migrated to Canada and the upper US from the Tyrol in Germany. Accordingly, the remaining four, Hirth, Vogel (Niall MacGinnis), Lohrmann (John Chandos) and Kranz (Peter Moore), reveal their identities, frantically attempting to convert the religious followers to fight for Hitler. After their impassioned pleas, however, the leader of the community and several others all reject them and demand that they leave.

Vogel, meanwhile, reveals that before the war he was a baker, and is immediately attracted to both the community’s kitchen and a young girl working there, Anna (Glynis Johns); since their current baker is not good with bread, Vogel becomes a big hit, and determines to stay with the community doing what he loves best. After a brief trial by Hirth, Vogel is executed for desertion.
Now down to only three, they attempt to make their way to Vancouver, from there to escape to Japan. But in Banf, Alberta, Kranz is spotted by a member of the Canadian Mounties and arrested. 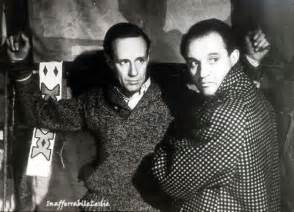 The remaining two men attempt to cross the Canadian Rockies with little food and no clear sense of direction. We have already seen them earlier with a badly outdated map created by a Nazi priest.

Once more, as at the Hutterite community, they are greeted kindly as tourists who have lost their way, this time at a camp where a writer named Philip Armstrong Scott (Leslie Howard) is staying, revealing that he owns a Matisse and Picasso painting.
The now desperate thugs turn on him, destroying his paintings and the manuscript on which he has been working before shooting him. Impossibly, Scott, a bit like Johnny, the Trapper, survives and goes in pursuit of the final survivor, Lohrmann, who has himself rebelled against Hirth’s leadership, who has holed up in a cave where Scott tracks him down, beating him to death.
All of this played out to music compose by Ralph Vaughan Williams and performed by the London Symphony Orchestra. David Lean edited.
It just goes to show you how even propagandistic work can be a lot of fun. And since there is no possible way to take much of this very seriously, Powell’s third film can be now recognized as a kind of marvelous fantasy not very different from his later great works such as Black Narcissus, The Red Shoes, The Tales of Hoffman, and Peeping Tom.

Posted by greenintegerblog at 8:26 AM